When it comes to photography, there are a few key concepts that you need to understand in order to take great photos. One of these is the difference between rolling shutter vs global shutter. In this article, we’ll explain what each one is, and show you how to choose the right option for your needs.

What is Rolling Shutter? What is Global Shutter?

First of all, I must be clear on one thing. I’m talking about electronic shutters rather than mechanical shutters.

Mechanical shutters are different. They have their own problems, like the limit on the flash sync speed. This is usually only 1/200 s or 1/250 s.

A rolling shutter and a global shutter are different kinds of electronic shutters. This article will try to explain the benefits and disadvantages of both.

Rolling shutter mode in digital cameras exposes pixels to light line-by-line, like a scanner. Cameras switch on the ones at the top of the sensor first and roll down to the bottom. Or two “waves” spread out from the middle of the sensor.

It works well in most situations. But you get a rolling shutter effect if subjects are moving around the frame quickly or if you pan the camera from side to side.

Camera manufacturers work hard to improve the readout speed of their sensors. But the rolling shutter problem will always remain.

If nothing moves in the scene, it’s not a problem. But if something moves, then different pixel rows record its position at different times and places. This leads to the rolling shutter effect—the skewing of the image from side to side.

The same happens if you pan the camera. It’s just the camera moving rather than the subject.

Imagine taking a picture of a rectangle moving quickly from left to right with a camera using a rolling shutter. When you press the shutter button, the begins.

The camera sensor records the top of the rectangle using the top row of pixels. Those pixels remain active for the length of your shutter speed (or time value). Let’s say it’s 1/1000 s.

The next row of pixels isn’t switched on until the first row has been. This delay is the “line time.” It might be something like 10 ms (10 microseconds or 10 millionths of a second).

As a result, the position of each successive part of the rectangle moves a bit to the right. So it turns it into a parallelogram!

Global shutter mode means exposing all the sensor pixels at the same time (or “globally”). This means there’s no distortion in the final image when taking pictures of moving objects.

It’s a more expensive technology. And it means an awful lot of data is being thrown at the image processing engine at the same time.

A global shutter camera also needs extra electronics. This makes it hard to use a backside illuminated (BSI) sensor.

That’s a shame because these sensors are much better for low-light photography. Placing the light-sensitive silicon layer closest to the light source lets them achieve 95% quantum efficiency (QE). That means losing only 5% of the original signal.

Global shutters have to use front-illuminated sensors. They must have microlenses and other electronic circuitry above the light-sensitive region. This limits their QE from 70-80%. This means 20-30% of the signal disappears. 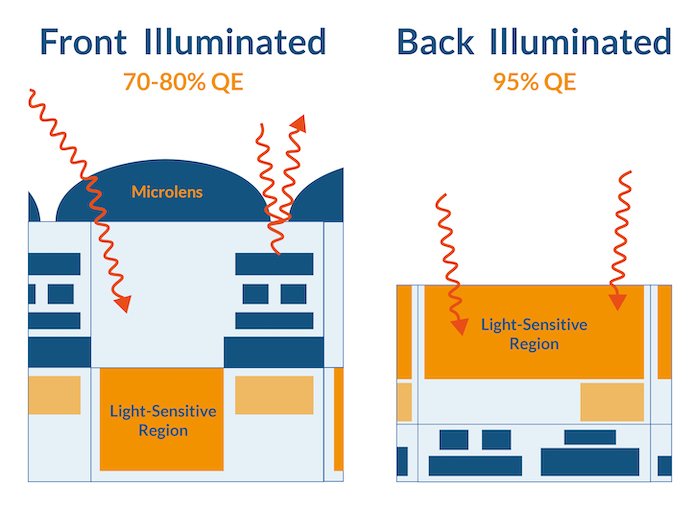 One other shutter type is the “pseudo-global shutter:” Teledyne Photometrics invented it. It’s available in their Prime and Kinetix rolling shutter cameras as an optional setting.

With the pseudo-global shutter, the sensor pixel rows are switched on one after the other… the same as a rolling shutter.

But the readout only happens when they’re all active. So it’s the benefits of a true global shutter. But it comes at the expense of a lower frame rate.

The other solution to the rolling shutter vs. global shutter problem is to make the shutter mode an optional setting. This means you can decide yourself, depending on the subject and the type of shot.

Andor’s Neo, Zyla, and Balor sCMOS cameras let you choose between global and rolling shutter. This is helped by what they call a five-transistor (5T) pixel architecture.

Rolling Shutter vs Global Shutter: Which is Better?

Each type of electronic shutter has advantages and disadvantages. The relative advantage depends on the application.

Most modern DSLR and mirrorless cameras have sensors with an electronic rolling shutter. This is because manufacturers think we’ll put up with the rolling shutter effect as long as we get better resolution and higher frame rates. And they’re probably right!

Dynamic range is also a factor. Blackmagic Design recently chose to replace the global shutter with a rolling shutter in their URSA Pro Mini 4.6K action camera to push the dynamic range up to 15 stops.

The only niche where manufacturers use global shutters is with Interline CCD or EMCCD sensor cameras. This is because frame rates aren’t as important. So the trade-off is different.

The best solution appears to be the optional shutter mode offered by Andor’s camera range. Photographers have more information about the local conditions and the type of shots they take. This means they should be able to choose for themselves which shutter mode to use.

Things may soon change. According to the rumor mill, the new EOS R1 flagship from Canon will have a global shutter rather than a rolling shutter.

This does mean the camera won’t be able to match the frame rates of the leading Nikon and Sony mirrorless cameras. But Canon obviously thinks the benefits outweigh the disadvantages.

When it comes to video, a global shutter is slightly more popular. Arri Alexa cameras are the most famous cameras used by Hollywood cinematographers. And they use a global shutter.

In an ideal world, cameras would all have global shutters. It makes sense for them to switch every pixel on and off simultaneously. And it would remove the distortion of rolling shutter mode.

That may happen in the future. And the advent of the Canon EOS R1 will give us a clue. Will it blaze a trail for global shutter cameras? Or will it end up on the technological scrap heap?

We’ll have to wait and see. More camera manufacturers like Andor may start offering global shutter mode as an optional setting instead. Photographers could then choose to put up with a lower frame rate to avoid rolling shutter effects.

In the battle of rolling shutter vs global shutter, they both might end up on the winning side! 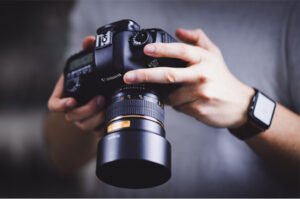 What Is the Hot Shoe? (and How Can You Use It)

A hot shoe adapter adds functionality to your camera. It is on nearly every digital camera. You may think it is only for flashes. This… 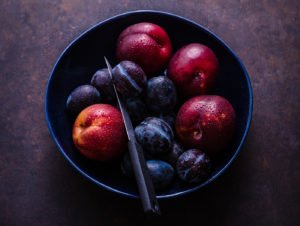 How to Understand Your Camera's Histogram for Better Food Photography

Your camera's histogram is one of the most powerful tools you have for taking great photos. But what is it, and how can use you… 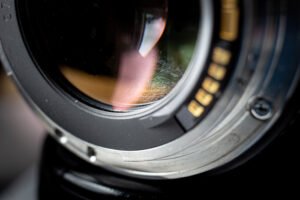 What is Camera Lens Fungus? (And How to Get Rid of It)

Just like dirt, camera lens fungus is a headache for photographers. It can cause severe problems if not dealt with quickly and professionally. Camera lenses…
See all articles in Photography Questions