Shutter speed is the most obvious contributing factor to . Alongside aperture and ISO, it has the biggest effect on your photos.

With a poor knowledge of how to use the correct shutter speed, you’ll end up with blurred results. Understanding shutter speed will help you improve your images end even produce more creative shots.

What Is Shutter Speed?

Shutter speed is the exact time of : the time that your camera records an image for.

In all cameras, there is a shutter mechanism that determines when light hits the sensor.

When we take an image, the shutter opens up for a given amount of time. This length of time is the shutter speed. The longer it is open, the more light hits the sensor, resulting in a brighter image.

Depending on the shutter speed, you’ll encounter either freezing or blurring moving elements in your shot. So, it is crucial that you understand how it works.

The thing we most commonly associate with shutter speed is . The longer the shutter is open, the bigger the chance is that your hands’ vibration will cause visible blur in the shot.

As a general rule, you need at least a shutter speed that equals the value of your focal length to avoid camera shake. For example, a 300mm lens (without image stabilization) will need a minimum of 1/300th. Similarly, a 50mm lens will need anything from 1/50th of a second. 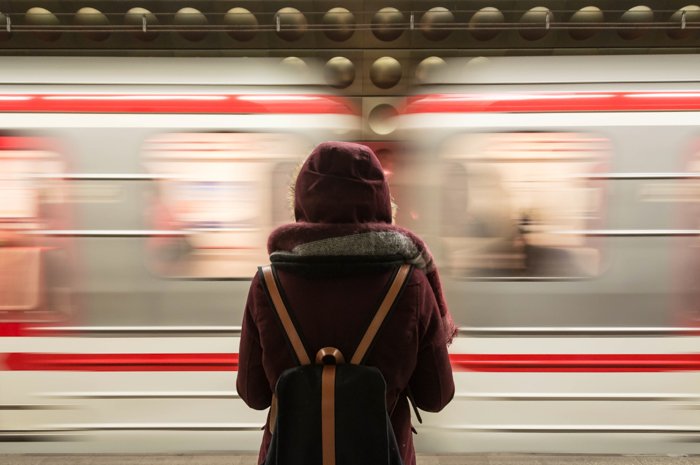 It is important for you to understand that these are effective values. If you’re using a camera that doesn’t have a full frame sensor (either smaller or larger), you need to take its crop factor into account.

Using shutter speed only slightly faster than recommended might result in some blur. Your hands might be shakier than the average – the only way to know this is experimenting.

Anything slower than this recommended value will most likely require a tripod. Alternatively, image stabilization can be a solution, which most telephoto lenses have built-in. It’s increasingly wide-spread in standard and wide-angle lenses as well, especially in zooms.

More often than not you’ll want to take your photo at a comfortably short speed, such as 1/500th of a second (in case of a standard lens). This will also help freeze the movement of your subject. Keep in mind that this amount largely depends on the speed of your subject and how close you are to it.

In most situations, slow shutter speed results in blurred images. 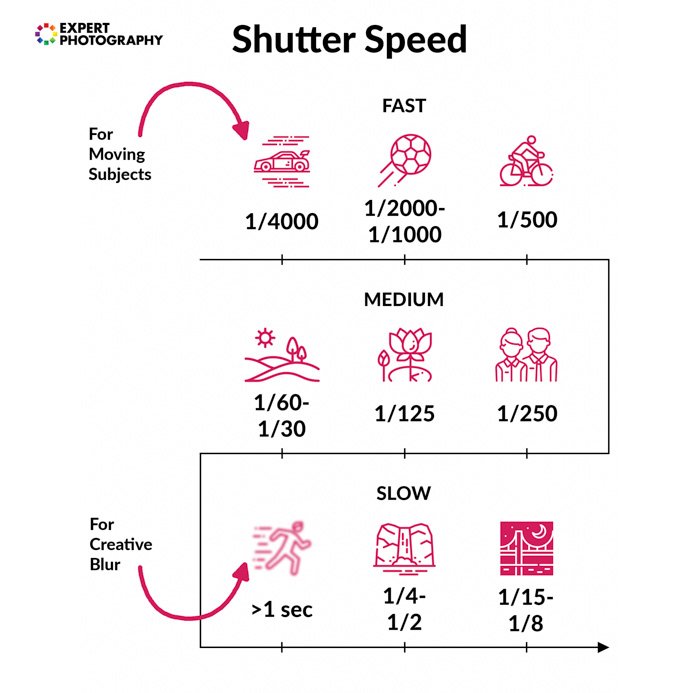 Similarly to ISO and aperture in photography, we use stops to indicate changes in shutter speed. But it’s a lot easier to wrap your head around than in the case of f-stops regarding aperture. 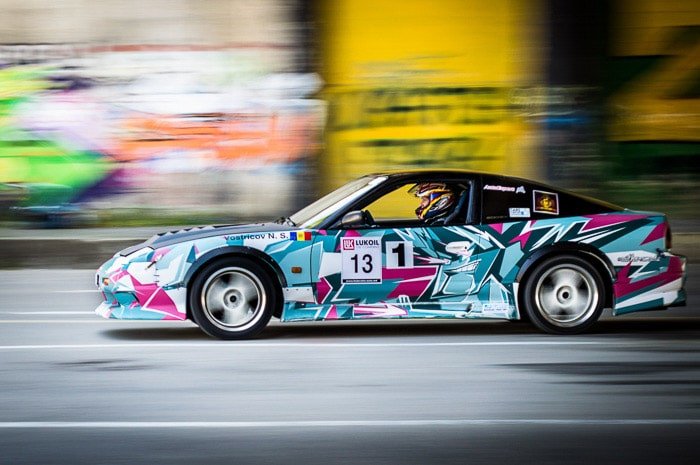 Freezing your subject requires a fast shutter speed. It occurs when you take a photo at such a fast shutter speed (usually 1/500 and above) that there’s no motion blur. It doesn’t suit all type of shots, as images taken at these speeds tend to appear flat. 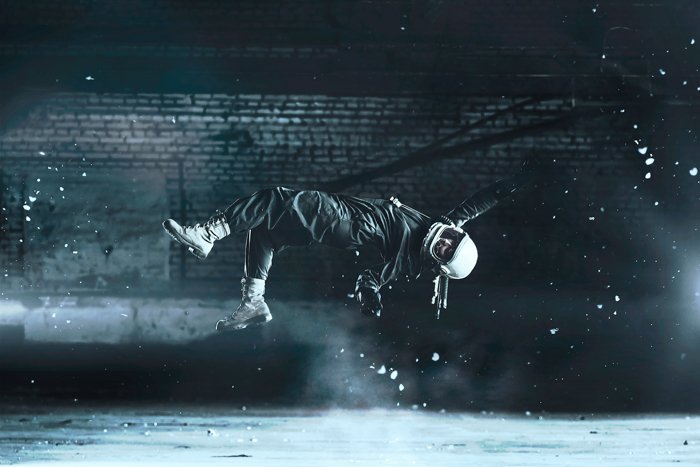 When shooting a fast-moving object, I like to include a small amount of motion. Otherwise, it may as well have been sitting still. 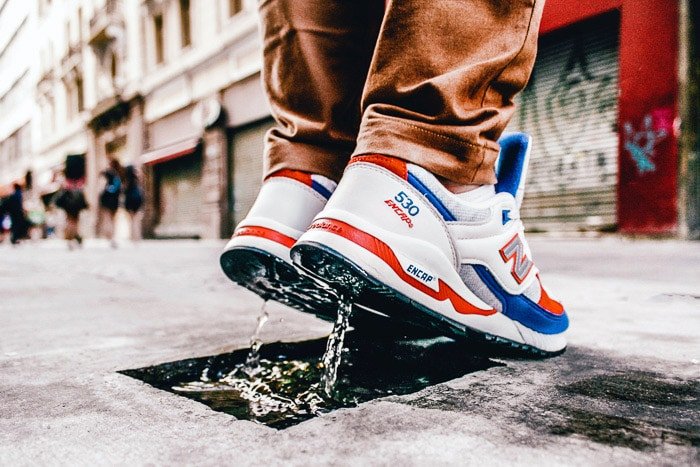 Choosing the Right Shutter Speed for the Situation

You will notice that there are third stops between these speed on cameras. They’re there to allow precise adjustments, but don’t make a fundamental difference. Hence, I’m only listing full stops.

A lot of the speeds listed below are dependant on how close the subject is to you. Also, this guide does not take into consideration. This is purely about what you capture at these speeds.

1/4000 of a Second – Freezing really fast objects and sudden moments. Think of the sorts of things you may capture at a high-speed: a baseball pitch, a balloon pop, or a splash of water.

1/2000 of a Second – Freezing the flight of birds. They move their wings really fast so you have to crank up the shutter speed really high.

1/1000 of a Second – Freezing fast-moving objects, such as moving vehicles.

1/500 of a Second – This is where you will start to freeze moving people, such as runners and cyclists.

1/250 of a Second  – A great speed for freezing your still subject, without having to think too much about focal length and how that affects the motion blur. Great for portrait and macro photography.

1/125 of a Second – This is the minimum shutter speed for taking still life photography. You won’t typically want to go much slower than this if you’re shooting handheld. Otherwise, you will likely capture from the movement of your hands. This is also where you will start to be able to use your shutter speed for panning.

1/60 of a Second – This is an ideal speed for panning photography and handheld photography in low light.

1/30 of a Second – This is approximately as slow as you can go while capturing panning photography. If you use much slower shutter speed, your photo will become too blurry.

1/15 of a Second – You can mount your camera on a tripod at this speed and capture sight movement from moving objects. Examples of this include people walking, cars moving in traffic, water blurring slightly.

1/8 of a Second – Blurring moving water, for example waterfalls.

1/4 of a Second – Creating blurred movement in a scene. Not so little that it appears accidental, but not so much that it’s hard to tell what’s going on.

1/2 of a Second – This speed creates even more motion blur and has a much stronger effect than the previous stop. Think of water starting to appear like mist.

1 Second – Twilight photography. The sun may not be completely gone, but there’s not enough light to make up the you’re looking for. You may incorporate a flash, and you’re more than likely to use a tripod.

More than 1 Second – This is where night photography starts to come into play. You can play with different shutter speeds and capture awesome nighttime photos

If you are aiming to add blur into your image, there are many ways to do so with the creative use of shutter speed.

Create a Point of Interest With Creative Blur

To create creative blur, you will need a few accessories. You need a remote trigger and a tripod to hold the camera steady. Then you can play around with the shutter speed settings.

This can create interesting images in which the blur is the main point of interest. For inspiration, try a fairground carousel. 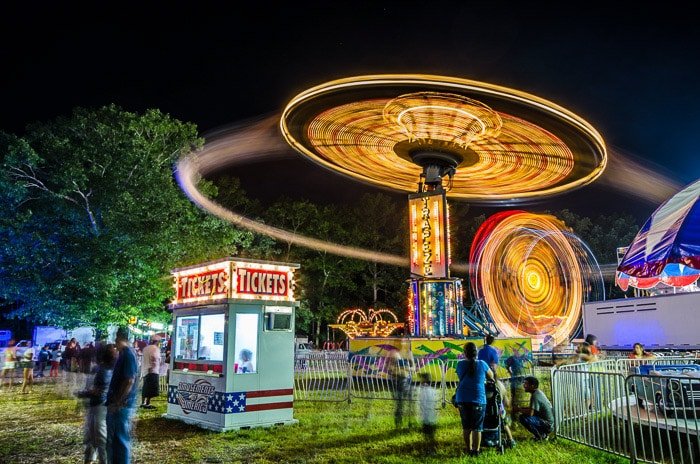 Panning is where you move your camera to follow a moving subject. It results in an image where the background is blurred but the subject is sharp.

This shot was taken from a sidewalk, panning the camera while using a slow shutter speed. The sense of movement is obvious because of this technique. 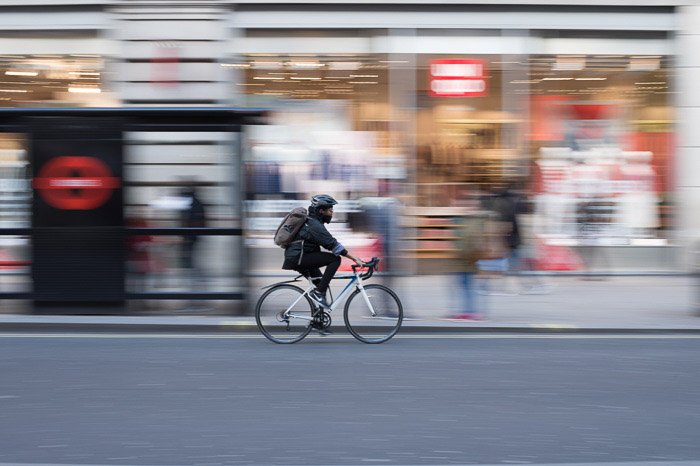 Controlling your shutter speed is a great way to show movement in a still scene. You can create strong motion linear blur by using relatively slow shutter speed and panning the camera to follow a subject.

Telephoto lenses need a faster shutter speed to capture an image without blur. These lenses pick up and magnify even the slightest movement of the camera. In contrast, a wide-angle lens requires a slower shutter speed as the details in the image are a lot smaller.

This means you can create a blurred image easier with a longer focal length lens. 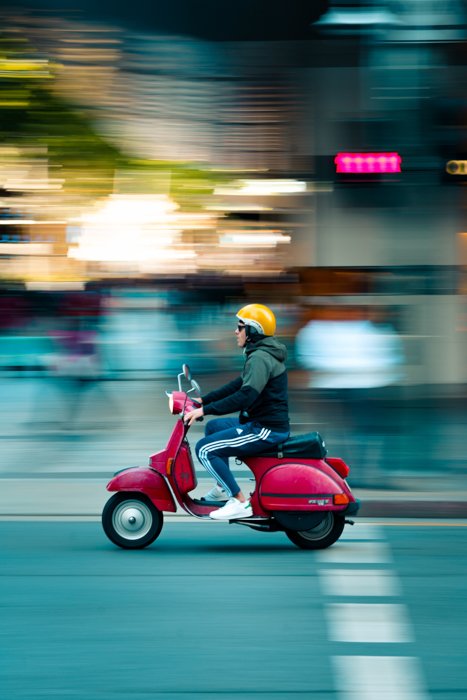 To set up your camera for panning, we recommend to set it to shutter priority mode (Tv in Canon or S in Nikon and Sony cameras). Aperture doesn’t really matter here – why not let your camera decide on it?

Set a shutter speed a few stops below the value recommended by the reciprocal rule. In the case of a 200mm lens, 1/40th-1/80th is generally good.

Then set drive mode to fast continuous. You’re very unlikely to get a great shot if you only have one frame. You’ll need to grab at least a burst of shots to have a bigger chance of capturing the right moment.

Make sure to follow the line of movement of your subject when shooting. The goal is to make it stay steady in the frame and let everything else move.

Some telephoto lenses have complex stabilization systems allowing for one-axis stabilization. If you switch this mode on, your lens will only stabilize in the vertical axis. It won’t compensate for movement on the horizontal axis. This makes panning a lot easier and more effective.

If you’re shooting sports such as soccer or motorsports, be sure to turn one-axis stabilization on – if you have it. 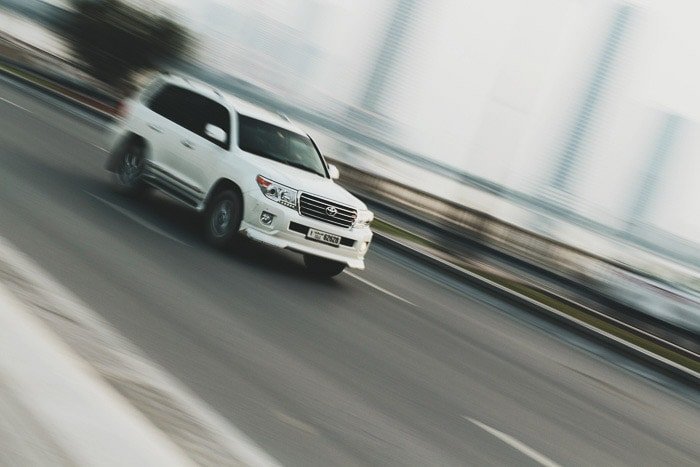 Add a Creative Blur With Flash

Adding flash to a photo with blur will freeze motion in the frame.

Choose a longer shutter speed. Start with around 1/40, and feel free experiment with different values later. Your flash will still only light your subjects momentarily, creating a sharp outline.

In the remaining time of , you can then move the camera around to capture the light and blur for artistic effect. This will create a ghosting effect. 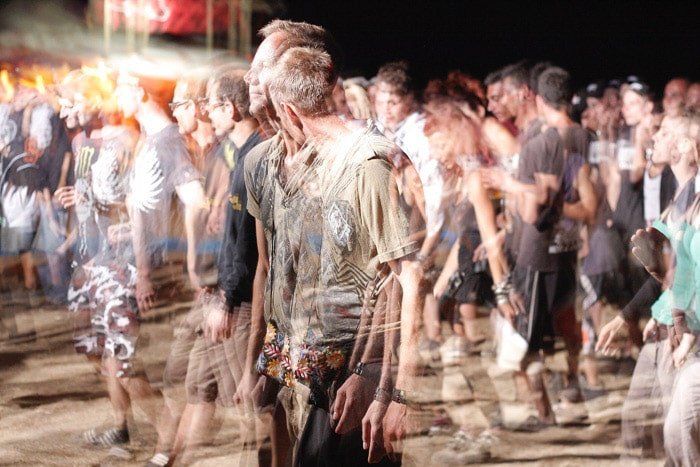 For light painting, all you need is a long and a light source. The photo below was taken on a 30-second shutter, which is a slow shutter speed setting. 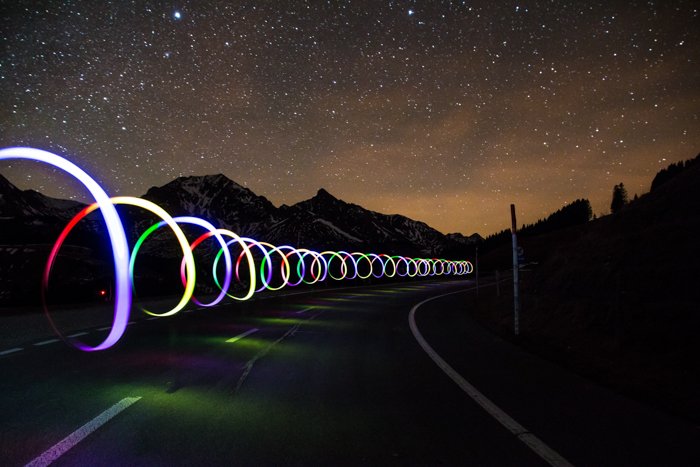 During the of this photo, I set off flashes of light onto the beach huts. This filled in the light exactly where I wanted it. It is a great tip for improving the lighting of your night photography. 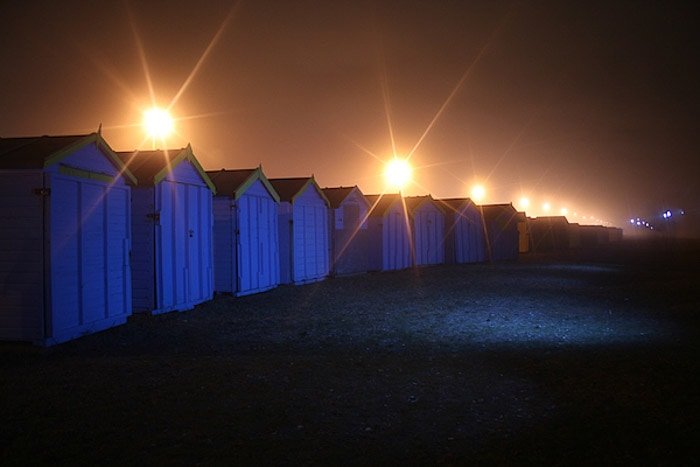 A long exposure coupled with a moving, constant light source allows you to add ‘graffiti‘ to an image. 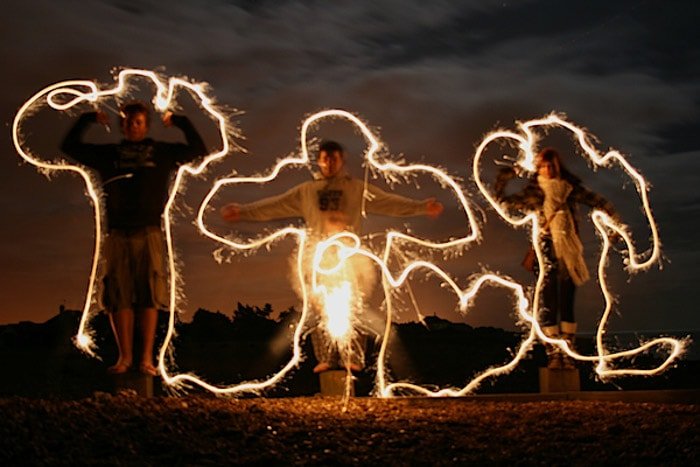 The longer the is, the more light the shutter lets into the camera. This way, you can illuminate low-light situations by using a slow shutter speed.

This photo was taken at night, so I used a slower shutter speed than usual photography to gain an even .

Long exposure photography is only possible with a tripod or somewhere flat to lay the camera. 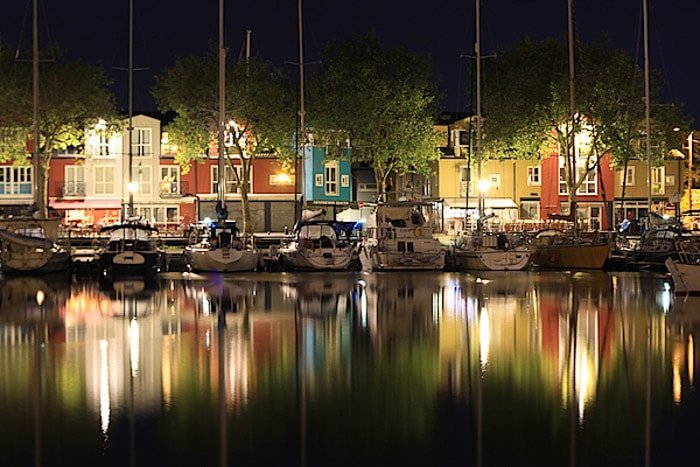 This next photo requires a long shutter speed but for a different reason. The creator of this image had to wait for a passing car to come into the frame.

The timing can be very difficult because it can take some time to figure out the exact settings. Only a specific shutter speed will make the blur precisely as long in the image as you wish. 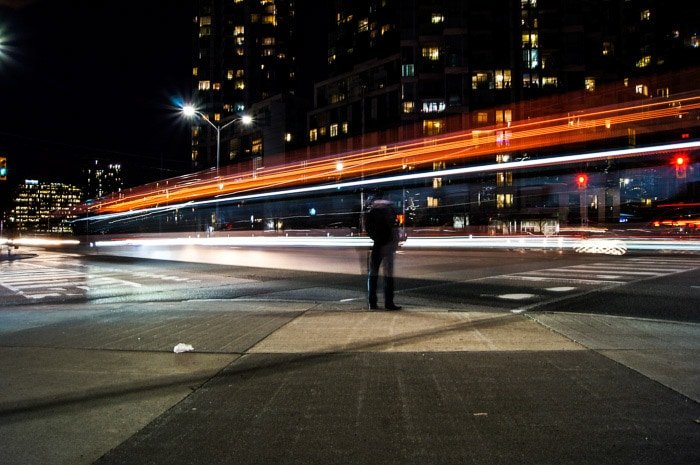 Choosing the right shutter speed is crucial when photographing moving subjects. It also plays a part in creative photography and gives you a chance to experiment with different lighting and motion blur methods.

At this point, you should be familiar with everything when it comes to setting your shutter speed.

The next step is to start using this knowledge in your photography. Use Manual mode or Shutter Priority mode to experiment with different settings and get to know what you like.

To get the best start in photography, try our course – Photography for Beginners!