Many male and female photographers place their lives on the line each day around the globe. These war photographers go out to report conflicts, battles and skirmishes. And to bring news to the public.
Without these brave photographers, many issues may never have come to light.
Here are 10 of the best war photographers whose work you should know. 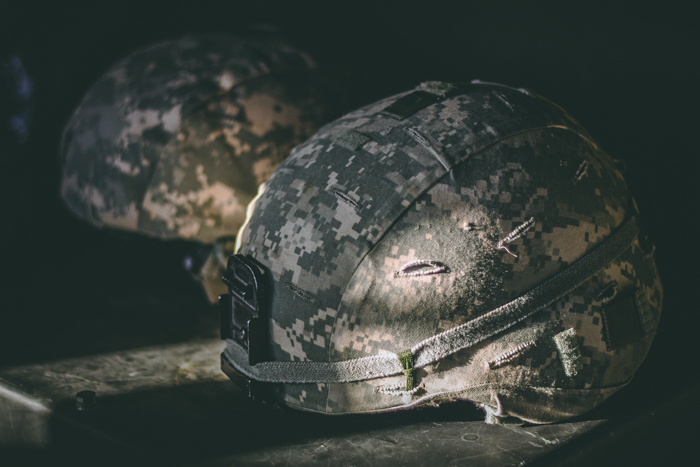 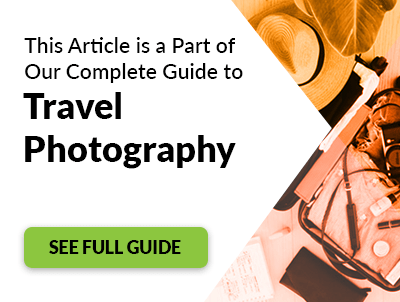 Roger Fenton, (28 March 1819 – 8 August 1869) was a British photographer. He was noted as one of the first war photographers. After graduating with an arts degree he gained a keen interest in new technology. At the time, new technology meant photography.
Between 1851/52, he began photographing and exhibiting his own images. From there, he became a leading British photographer. He was a founding member of the Royal Photographic Society.
In 1854, London print publisher Thomas Agnew & Sons commissioned him to document events occurring in Crimea. He became one of a handful of photographers to cover the Crimean war.
The equipment at the time was large and cumbersome. For him to photograph anything, he needed a horse-drawn cart and an assistant capturing via long exposure.
Because of these limitations, he was only able to capture posed images of stationary objects. He captured the landscapes as he wanted to avoid photographing dead or mutilated bodies.
The below image is of ‘The Valley of the Shadow of Death’, named so after the Charge of the Light Brigade and the poem by Tennyson.
He didn’t gain much commercial success with these images. After returning to Britain, he travelled across the country, recording landscapes. 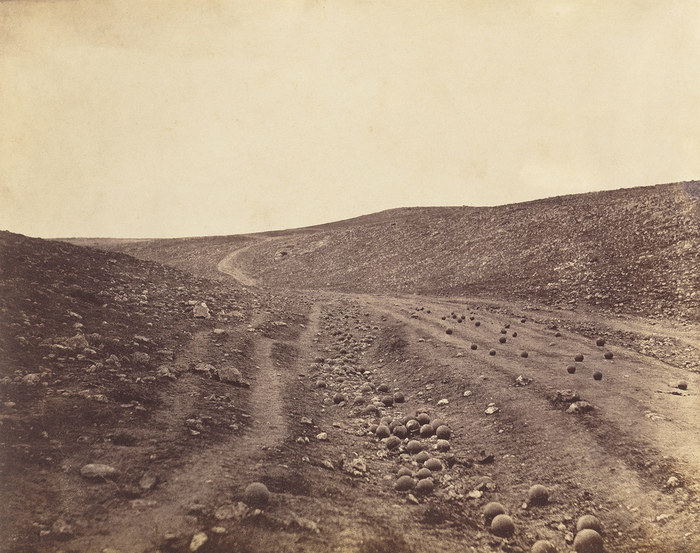 Nick Ut (Huỳnh Công Út;  29 March 1951) is a Vietnamese/American photographer. He worked for Associated Press, out of Los Angeles. He won the 1973 World Press Photo of the Year for “The Terror of War”.
This image depicts children in flight from a napalm bombing during the Vietnam War. One of his images is iconic for the Vietnamese conflict, where we see a naked 9-year old girl running toward the camera.
The debated image came under fire as the girl is shown naked. Nick Ut did help the girl and get her to a hospital before delivering the film. This goes to show how much war photographers actually help the people they photograph.
On the 40th anniversary of that Pulitzer Prize-winning photo, Leica inducted him into the Hall of Fame. This was for his contributions to photojournalism.
Nick Ut began capturing images for AP when he was 16 years old. He joined after his brother, another AP photographer, died while covering the conflict.
He continued to work for AP, covering Tokyo, South Korea and Hanoi. And he retired in 2017. 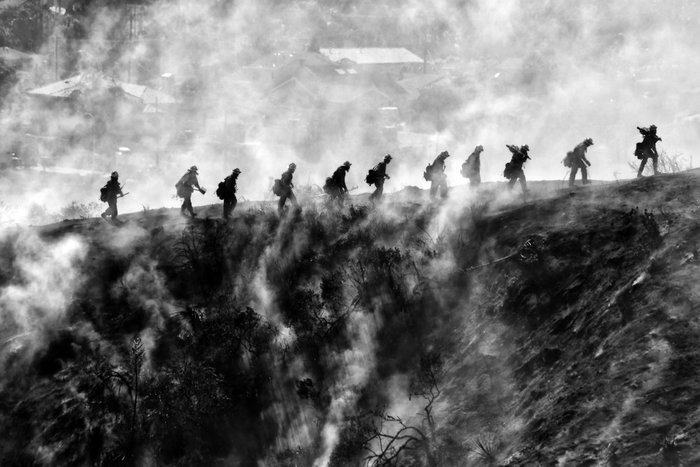 Margaret Bourke-White (14 June 1904 – 27 August 1971) was the first female war correspondent. She was also the first woman allowed to work in combat zones during World War II.
In 1941, she travelled to the Soviet Union when Germany broke its non-aggression pact. She was the only foreign photographer in Moscow when German forces invaded. She took refuge in the U.S. Embassy. And captured the ensuing firestorms on camera.
As the war progressed, she left for North Africa alongside the U.S. Army Air Force. After that, she joined the U.S. Army in Italy and later, Germany. She came under fire many times in Italy.
Her interest in photography started as a hobby. Her father supported her as he had an interest in old cameras. After her father’s death, she left her Herpetology studies. She bounced around a few different colleges before graduating from Cornell.
It was only in 1928 that she turned to photography full time. She opened her commercial photography studio in New York. A year later, she became the staff photographer for Fortune magazine until 1935. 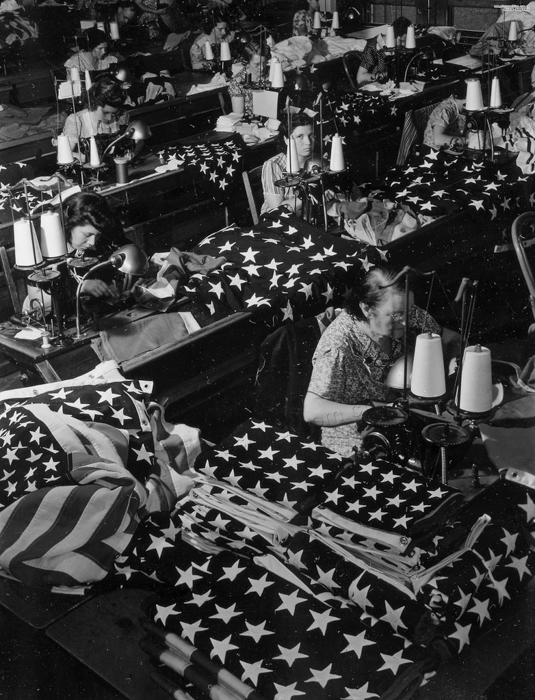 Philip Jones-Griffiths (18 February, 1936 – 19 March, 2008) studied pharmacy, not photography. He covered the night shift at Boots while photographing for the Manchester Guardian part time.
It wasn’t until 1961 that he began working as a full-time photographer. The newspaper was The Observer. His first task was to travel to Algeria in 1962. After Africa, he made his way to Vietnam in 1966. He worked for the Magnum agency, photographing the ongoing conflict.
Magnum found it difficult to publish his work, as he depicted a sense of European decolonisation in the area.
Philip’s big break came when he managed to capture Jackie Kennedy holidaying in Cambodia. The sale of these images enabled him to stay in Vietnam. He published Vietnam Inc. in 1971,
This book served as a very detailed account of the horrors of war, as well as daily Vietnamese rural life. He was so good at capturing the war that the South Vietnamese president placed his name at the top of the list of people not to let back into the country.
Henri Cartier-Bresson said of Griffiths, “Not since Goya has anyone portrayed war like Philip Jones Griffiths.” 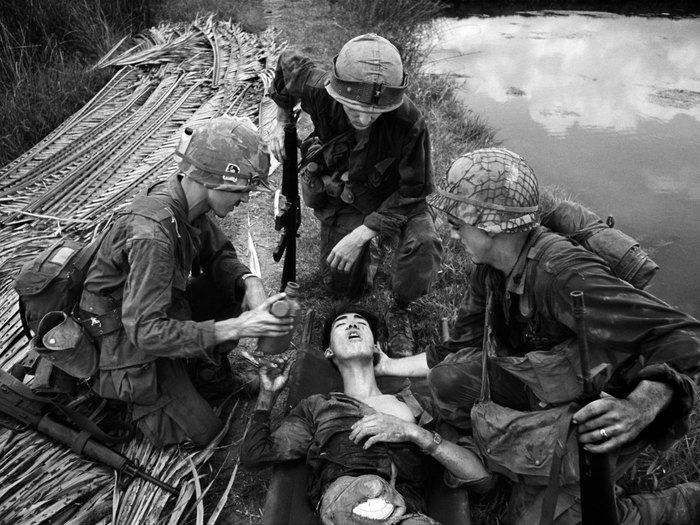 Moises Saman (1974) is a Spanish-American photographer, based in Tokyo. He is a full-time member of Magnum photos and considered “one of the leading conflict photographers of his generation”.
Saman is best known for his photographs from Iraq. He also covered the revolution in Egypt. His book Discordia (2016) shows these images alongside the broader Arab Spring revolution.
Apart from winning many awards from World Press Photo, he won the Pictures of the Year International. He also received a Guggenheim Fellowship.
Magnum Photos invited Saman to join in 2010. He became a full member in 2014.
His first book This Is War (2001) first brought my attention to him. I regard him as one of the best war photographers of our time. 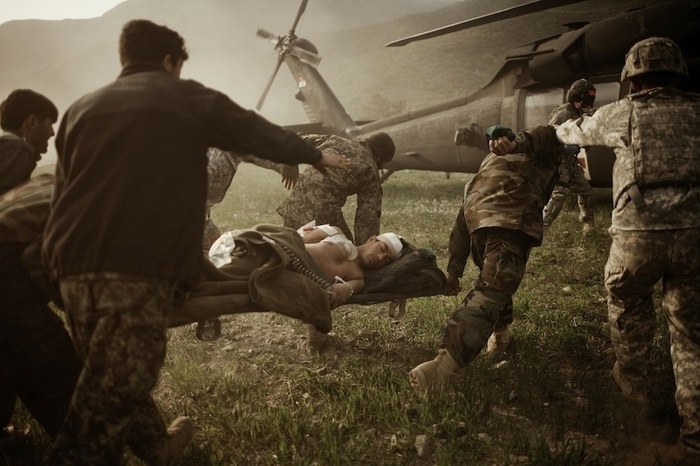 João Silva (9 August 1966) is a Portuguese-born South African war photographer. He was the last working member of the Bang-Bang Club. This was a group of photographers who covered South Africa.
João captured images from the time of Nelson Mandela’s release to the first elections in 1994. He worked alongside Kevin Carter, whose images caused controversy among viewers.
Silva has worked in many areas across the globe. Africa, the Balkans, Central Asia, Russia, and the Middle East.
Like many war photographers, he found himself injured while capturing images. On 23 October 2010, Silva stepped on a land mine while on patrol with US soldiers in Kandahar, Afghanistan.
He lost both his legs. Between the time of the explosion and passing out, he managed to capture three images from his prone position.
João once said of himself “I’m a historian with a camera […]”. 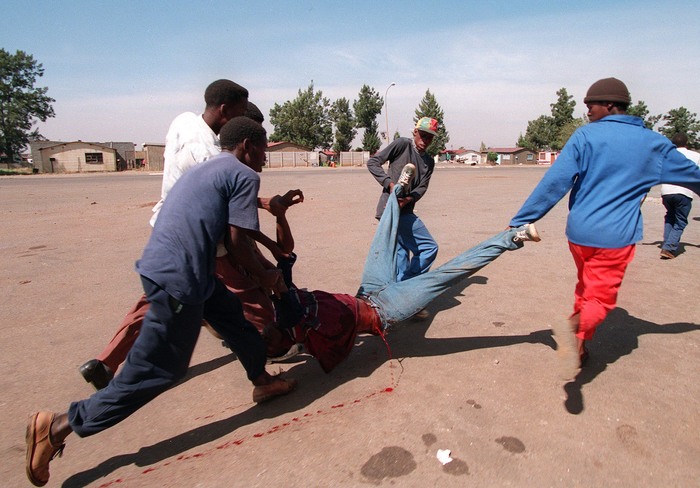 Timothy Hetherington (5 December 1970 – 20 April 2011) was a British photojournalist. He died while covering the conflict in Libya in 2011 from shrapnel from an explosive device. Chris Hondros also died in the same altercation.
The idea to photograph came from his travels around India, China, and Tibet. He worked for years while studying photography at night school. He then went on to study photojournalism in Cardiff.
Tim is most famous for his documentary film Restrepo (2010). This was co-directed by Sebastian Junger. It won the Grand Jury Prize at the Sundance and received an Academy Award nomination.
He also won various awards, including the 2007 World Press Photo of the Year. Apart from photographing Afghanistan, his work and passion took him all over Africa. 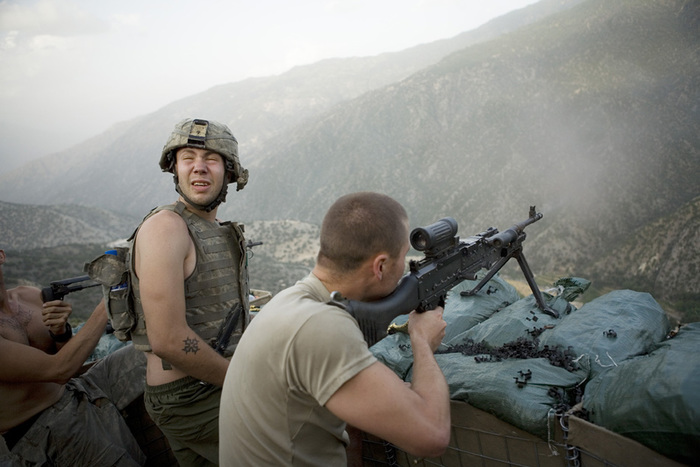 Sir Donald McCullin, CBE, Hon FRPS (9 October 1935), is a British photojournalist. He is particularly recognized for his war photography and images of urban strife.
Don started his career as a photography assistant while completing his National Service in the Royal Air Force (RAF). He actually failed the photographer’s test. This forced him to spend the majority of his time in a darkroom.
One turning point in his career came from photographing and publishing images of a local London gang. The series is titled The Guvnors. This cemented his role as a photographer.
He continued to photograph, jumping between the Vietnam War and the Northern Ireland conflict. In 1968, his Nikon camera stopped a bullet meant for him.
Despite his fame as one of the greatest war photographers, the Conservative British Government cut his work short. They stopped him from photographing the Falklands War. 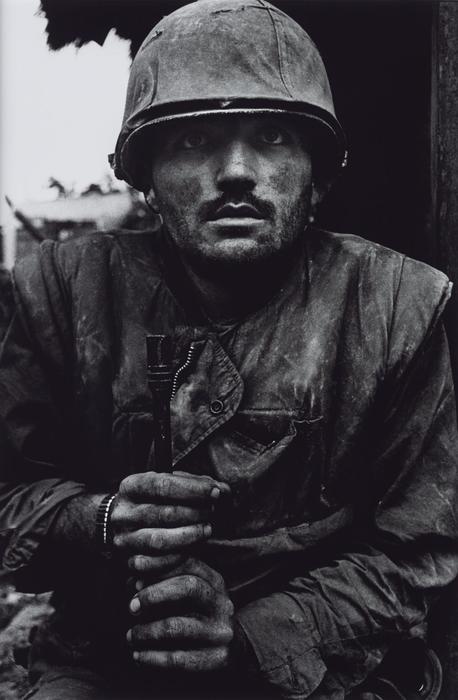 Robert Capa (Endre Friedmann; 22 October 1913 – 25 May 1954) was a Hungarian war photographer and photojournalist. He worked alongside his companion and professional partner, photographer Gerda Taro.
Many consider Capa to be the most famous war photographer in history. This is partly down to controversy, extensive combat photography and the way he died.
Born in Budapest, he felt the political oppression of the time, forcing him to flee to Berlin. Here, he saw the rise of Hitler, which led him to move to Paris. It was in Paris that he met and began to work with Gerta Pohorylle.
She changed her name to Gerda Taro. He changed his to Robert Capa, a name he picked up from his ‘shark’ tactics in street photography. They both published work under his name until her name change, then her work was published separately.
Robert Capa covered five wars. The Spanish Civil War, the Second Sino-Japanese War, World War II across Europe, the 1948 Arab–Israeli War, and the First Indochina War. His images found themselves across the globe, published in magazine and newspapers.
For more information on this war photographer’s most famous image, see our most controversial images article. 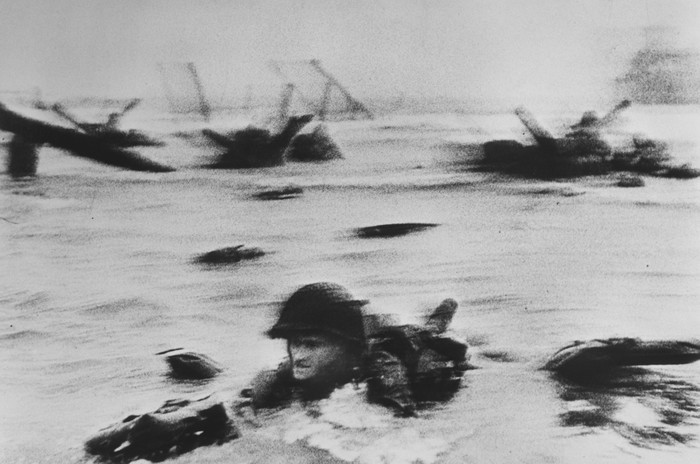 James Nachtwey (March 14, 1948) is an American photojournalist and war photographer. He is one of the most awarded war photographers. Not only gaining the Overseas Press Club’s Robert Capa Gold Medal five times, but also two World Press Photo awards.
Nachtwey found himself injured by a grenade while working in Baghdad, 2003. Unlike many who follow in the same profession, he was lucky and made a full recovery.
James has worked with Time as a contract photographer since he was 36 years old. He also worked for Black Star (1980–1985), and was a member of Magnum Photos (1986–2001).
He helped found the VII Photo Agency (2001–2011). They specialize in helping documentary and war photographers globally.
Apart from photographing the aftermath of 9/11, he has captured images from all over the world. Most notable are the Yugoslavian war, the conflicts in Afghanistan and skirmishes in Chechnya. 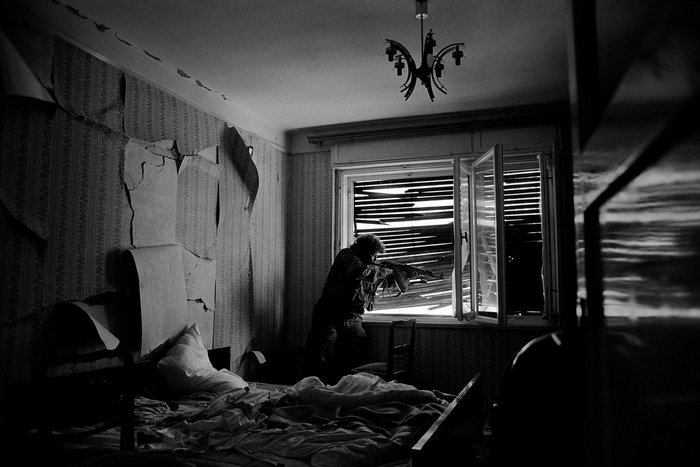 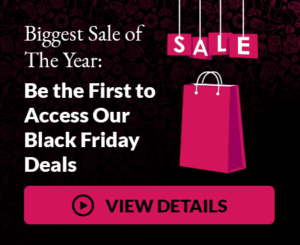 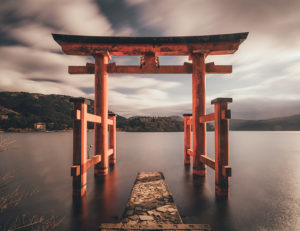 20 Beautiful Pictures of Japan to Inspire Your Travel Photography

Japan is one of the most breathtaking countries in the world. It's filled with bustling cities and nature. Both appeal to a wide variety of… 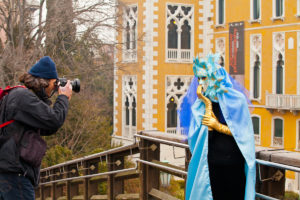 Ever wondered how those beautiful travel photographs in magazines came to be? They are usually the result of dedication, persistence and hard work. But before… 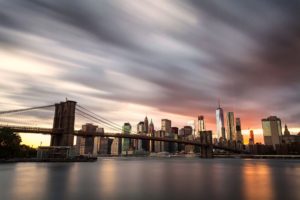 The 10 Best Places to Take Pictures in NYC

The Big Apple is an amazing place to take photos. There's so many places to take pictures in NYC though that you might feel overwhelmed.…
See all articles in Travel Photography