Henri Cartier Bresson was one of the most influential photographers of the 20th century. He is known for his unique style, which emphasized spontaneity and intuition over careful planning and composition. Here are six tips to help you capture photos with Henri Cartier-Bresson’s signature style.

1. Use “Figure-to-Ground” to Make Subjects Stand Out

For this, they need to be contrasting. You can achieve this by using black-and-white contrasts or tonal differences. The contrast stops the subject from melting into the background. It makes its shape and form look stronger.

This technique is a great way to make the subject more robust in the frame.

2. Find Repetition to Strengthen the Composition

Repetition is a great compositional technique to make an image more interesting.

For example, take Bresson’s image of the Bolshoi Ballet School. We see young ballerinas in the same position, standing behind each other. Their posture and dresses are almost the same. This makes the subject repetitive, and the ballet dancers look alike.

You will also notice they all have bows in their hair, even if placed differently. The closest ballerina looks like she was copied and pasted into different parts of the image.

If only one ballet dancer were in the photo, we wouldn’t spend so much time looking at the photograph. The repetition strengthens the impact of the image.

3. Include Shadows to Create Interest and Meaning

Shadows are essential in photography. Photography is all about painting with light. And you can’t have light without darkness.

Shadows can offer shapes, forms, and textures as an overlay in any given scene. They give us two scenes within one frame. In Bresson’s image below, the idea is no different. The shadow is the imprint of the top of a building, played out on the wall of the scene.

Notice the sleeping man in the picture. He is sleeping on a ledge of the closest building. Because of the shadows, it looks like he is asleep in a tower under the decorated roof. Shadows give various meanings to your photos, making them more interesting.

4. Use Diagonals and the Golden Triangle to Draw Attention

Henri-Cartier Bresson often used diagonals (the golden triangle) for composition. This technique is a mixture of the rule of thirds and diagonal lines.

Imagine a scene where the subject lies on a diagonal line across the image. Now imagine another line intersecting with it. The intersection is either one-third or two-thirds along the first line. This is the point where the interesting part of the image should be.

The diagonals draw the viewers’ eyes into the frame, and the intersection keeps it there. Look at the below image of two lovers on a train. The diagonal line lies across the woman, where their heads repose. It makes the image more interesting than only having the figures in the center of the frame.

5. Picture the Fibonacci Spiral for a Balanced Photo

It is human nature to crave balance. When an image becomes balanced, it lacks tension and gives a sense of harmony. The Fibonacci spiral offers this exact concept. It goes by many other names, such as the Golden Spiral, Phi Grid, or The Golden Ratio.

This concept bases itself on a sequence of numbers called the Fibonacci sequence. The ratio of 1:1.618, which, when divided, gives you an exponentially growing line. It looks like the spiral in our next image.

The Fibonacci Spiral appears throughout nature too. It is in nautilus shells, the twist of pinecones, or the arrangement of a sunflower’s seeds.

You don’t need to be a math expert to use this composition technique in your photography. You only need to learn the spiral and all eight positions the spiral can have in your images.

The most interesting parts of the scene should be at the intersection. Our eyes follow this fictitious line, landing at that intersection. You can best use this when the landscape offers the viewer some visual delight.

6. Watch for the Right Moment to Get the Perfect Shot

Lastly, we arrive at Bresson’s crowning achievement. The decisive moment had a significant influence on photography composition throughout history. It is less about framing your subject and more about when to capture a scene. Here, the power lies with the photographer.

Bresson’s image of a man jumping into a puddle is below. It gives a lot of information and creates a lot of questions. The photograph’s elements would not have been the same one second before or after the image was taken.

We are unsure if the puddle is shallow enough not to soak our subject thoroughly. But we do know that the man is brave enough to try. He might know something we don’t, as we find ourselves limited by our position and perspective.

A second too early, and we would have never known if the man intended to jump or not. So photography relies on what you capture in that second, not before or after. What makes a photographer is their ability to capture the right moment. 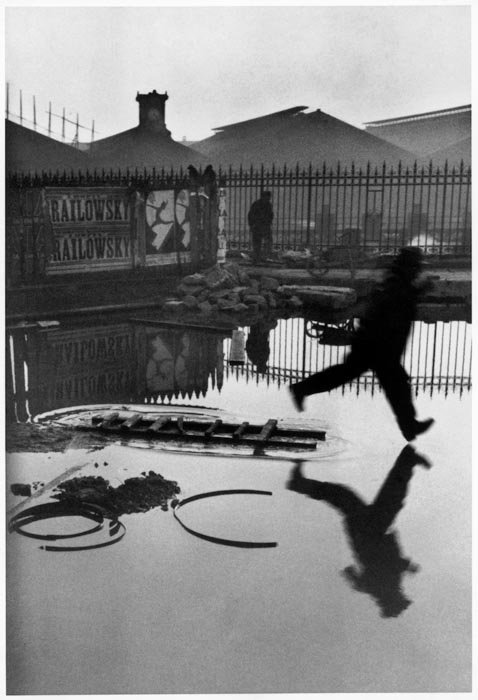 Why is Composition Difficult?

Composition techniques are difficult to master because you need to see things coherently. A photographer does not see a scene the same way as everybody else. It’s a skill you can improve. But it’s more complex than learning the technical aspects of photography.

Let’s say you find a perfect location but feel it misses something. If you have the technical knowledge, you can expose the shot correctly. Yet, your photos might look dull without creating an appealing composition.

This is one of the reasons we look towards the masters of photography. Their work is inspirational. And we can learn a lot from the way they composed their images.

You can adapt these composition techniques from Henri Cartier-Bresson to many different situations. The most important aspect of each is to practice and shoot whenever you have the opportunity.

Have a strong vision while you shoot. Observe your environment before exposing an image. First, search for composition techniques you can use to enhance your photo. Then you can look into the viewfinder and capture the scene.