When it comes to photography, there are few things more coveted than a rare masterpiece. And when that masterpiece is also the most expensive photo ever sold at auction, well, that just makes it all the more special.

So what is it that makes Rhein II so special? Why did it sell for such an incredible price? Read on to find out. 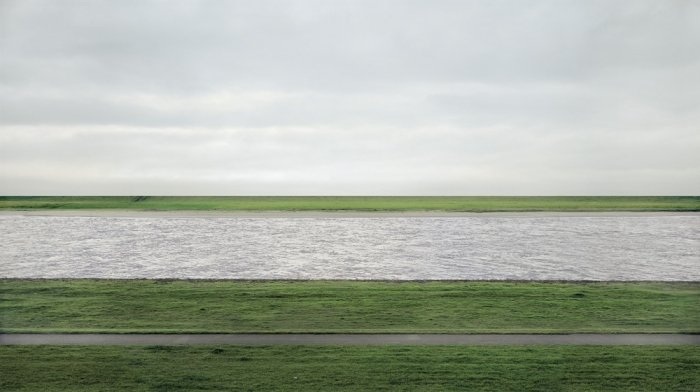 There are other factors involved in the price. The prestige of the artist and the value of their previous work have a role to play too. But I want to look at what makes this photo so good on its own.
If I could paint a Picasso right now, it wouldn’t be worth nearly as much as the same thing painted by Picasso himself. The value doesn’t depend entirely on the image itself but on the significance of the artist as well.
Andreas Gursky is probably the number one art photographer in the world right now. His status, combined with the rarity of the print (it’s the largest and first of only 6 prints), is what made someone spend the money that they did.
Is it worth it?
A photo is worth as much as someone is willing to pay for it so, for the new owner it was worth it but, for you and I, probably not.
Andreas Gursky has had a different photo previously ranked the world’s most expensive. It’s called ’99 Cent’ and it depicts a scene from a supermarket.
There were more visual elements making up that photo.
So Andreas is a very well established photographer with a history of highly priced photos. But I think that a lot of people looking at this photo are thinking, “I could take that”, so why so expensive?
Firstly, there is a very big difference between “I could take that” and “I did take that”. Anyone “could” but “did” requires the initial vision.
He had the required vision to see the image in the first place, followed by the further vision to fix it the way he wanted to.
Yes, this image, although shot in 1999, has been digitalized and photoshopped. Andreas took out the elements that were bothering him which left him with this very mesmerizing photo.
The first thing I noticed was that Gursky has seemingly cut the photo in half with the horizon. This is something I would usually steer away from.
Also, the sky isn’t all that interesting. I probably would have included less of it but I guess that’s one of the reasons that you look at the photo for so long.
It’s also a perfectly straight line. This is uncommon in nature – perhaps that was one of the elements that he photoshopped.
The photo is lacking any really strong visual weights and, with multiple horizontal lines, it looks balanced. The lines reinforce the feeling of strength and earth.
More than anything, the photo gives me a feeling of being very organized. The fact that the lines extend to the end of the frame makes it seem as though they could go on forever.
When you consider that this is in fact a photo of a river, that notion becomes a lot more significant.
Rivers don’t tend to flow in straight lines surrounded by even more straight lines. The photographer is making an observation, showing his feeling towards something and what exactly that feeling is, is up to you to decide.
For me, the river has a feeling of life to it but is being constrained by the straight geometric lines laid out by the modern man. It’s the life and nature of the river being constrained by a manmade footpath.
The colour looks desaturated. This may have been a result either of photoshop or the film that he was shooting on. The whole photo consists of two main colours: gray and green. This is reminiscent of black and white photography, where only two ‘colours’ are used.
The sequence in which the colours are used is also rather interesting. It’s not that common to see blocks of colour broken up like that (in photography) without a recurring sequence.
Gursky has broken some ‘rules’ of composition in the photo. He has done things that I wouldn’t have done because I personally don’t see it as good photography. This just goes to show that the rules are made to be broken.
Learning composition is one of the most important things you can do to improve your photography. When you start to abuse this and instead make photos that work for different reasons, you’re really onto something.
What really sells the photo for me is that it can’t help but evoke certain feelings when you look at it.
Whether it’s a feeling of militant-like repetitive regime, or a feeling of a great expansiveness, or perhaps even a feeling of emptiness, the image makes you feel something.
Gursky has managed to take a seemingly boring and uninteresting image and made us think and feel about it in a way that we usually wouldn’t.
I’m not saying that you or I couldn’t take that photo but, when it comes down to studying the photo, that’s irrelevant.
At this level of photography, it’s not about the composition of the photo but the feelings evoked from it. And f those feelings are strong enough for you – and you have the money – you may well have paid $4,338,500 for it too.
[ExpertPhotography is supported by readers. Product links on ExpertPhotography are referral links. If you use one of these and buy something we make a little bit of money. Need more info? See how it all works here.]

What Do You Think?

Leave a comment letting me know what you think makes the photo so great, how it makes you feel, and whether you could ever justify paying that much for a photo?
I’m very interested to know what everyone else is thinking.
Check out our new post on the 7 most expensive photographs ever sold.