You don’t need to go through the hassle of printing your model releases and carry around paper releases for your models to sign anymore. All you need is your smartphone to get a signature.
We’re here to show you seven of the best model release apps you can use today. 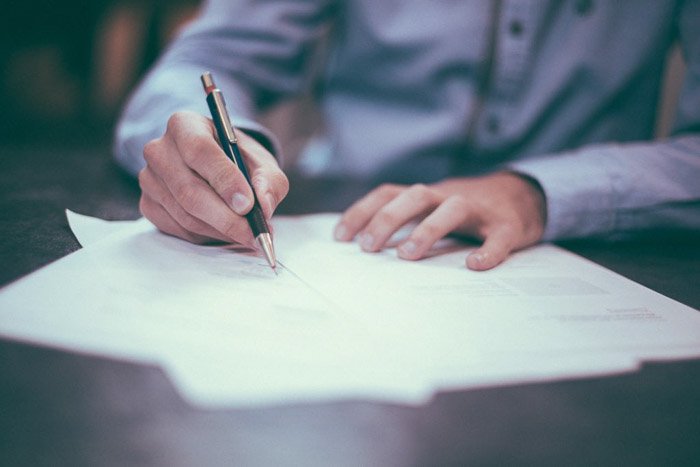 What is a Model Release App?

If you want to get into commercial photography, you’ll be hearing ‘model release’ a lot. But what is it exactly and why do you need it?
A model release offers proof that a person has given you permission to sell the images you produce. This document protects you from legal problems when using the photos commercial purposes.
There are different types of releases out there. First, there is the general model release for persons 18-years-old or older. Then, there’s the photo release form for minors for talents below 18-years-old. And finally, there’s the property release form for buildings and privately-owned places.
If you’ve been taking photos as a hobby for a while, you’re probably wondering: why do you need any proof of consent? Isn’t it enough confirmation that your models are willing to pose in front of the camera?
Well, people can change their minds later on and say you forced them to do the photo shoot. And if you don’t have any documentation that they agreed to work with you, they can sue you.
That’s why it makes sense to bring a model release form every time you shoot to protect yourself. It helps especially if you plan to make money from those pictures. Besides, most microstock agencies ask for them before you submit your work.
Before you start a photo shoot, have your model sign your photography release form first. Doing so ensures you agree to all the terms before they pose in front of the camera. You’ll also need a witness to sign the document to verify its authenticity.

With tons of features to offer, Model Releaser is among the most popular model release apps out there. It also has a well-organized user interface that makes it easy for you to find everything you need.
Among the best features of the Model Releaser is its ability to let you attach model photos to the forms. It eliminates the confusion especially if you’re working with dozens of models.
It has a model database which you can transfer via the cloud so you can view the files from any device. And it even has a calendar you can sync with your phone to remind you of your upcoming shoots.
Model Releaser has a free version, but to get the most out of it, you’ll have to buy one of the packages it offers. The first is the $3.99 Premium which lets you create and save model releases.
The second is the $7.99 professional package which allows you to backup files and changes theme/colors of your form.
And finally, there’s the Studio Package. It features Wi-Fi printing and customized model releases among other extras. 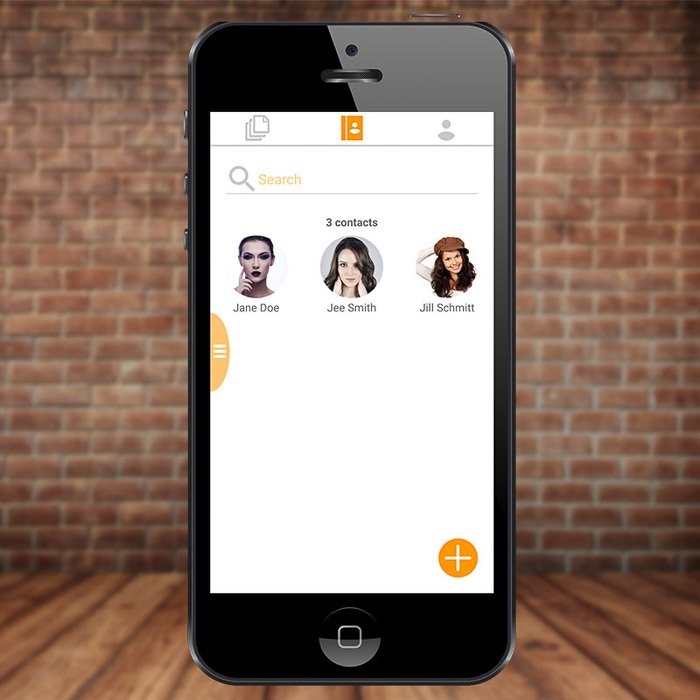 Listed among bestappsite.com’s “100 Best Apps of 2014,” Easy Release app is a leader in model releases.
Easy Release offers the usual features that most apps also have. But one element that makes it stand out is that it lets you create a multi-page release.
You’ll find this feature useful for big commercial shoots with plenty of legalese. And of course, you can always customize them, so they meet your needs.
Another feature that makes Easy Release superior is its auto-save feature. You don’t have to worry about manually transfering your files to cloud anymore since the app does it for you.
Even if you accidentally delete your data or lose your phone, you know you’ll always have a backup. 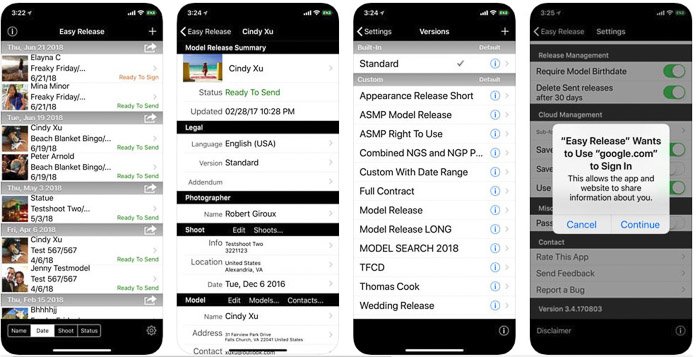 As a top stock photography agency, it’s not surprising that 500px has their own release app. Its convenience and effectiveness has made it the go-to platform for their contributors.
If you’re thinking of selling your photos to their platform, downloading their app is a must.
Unlike other apps, 500px has a rather plain platform and doesn’t offer as many features. All it offers is a template for a model release and another one for property.
But at the same time, its simple user interface makes it a favorite among many photographers. The experience feels like filling out a regular document but in a digital platform.
It even offers the same complete form you’ll find online. All you have to do is provide the information and the necessary signatures. With less clutter, you don’t have to spend too much time looking for the forms you want to fill.
This app is only available for iOS devices. 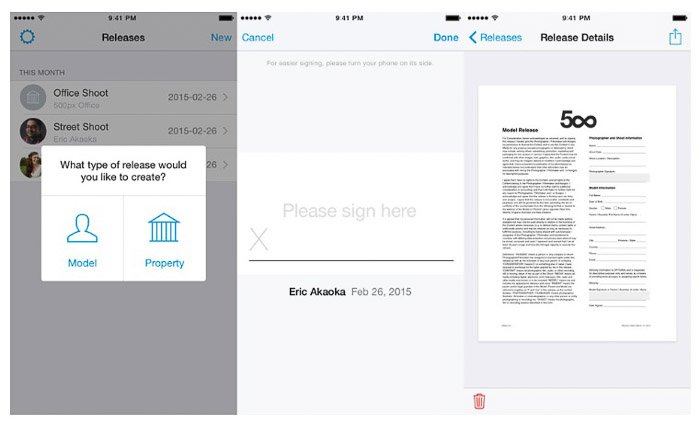 If you need a simple and hassle-free model release app, then Snapwire is for you. It doesn’t just have all the crucial tools other apps offer, but it’s also free to download and use.
Snapwire’s major selling point is the templates specifically made for microstock agencies. It offers forms for Getty Images, Shutterstock, Adobe Stock and more.
You can also save your information within the app, so you don’t have to fill out documents every time you do a shoot.
Snapwire supports major cloud services such as Google Drive and Dropbox. That means you can save and transfer files to other entities without any difficulty. Although other options also have this feature, it’s convenient to have especially for a free app.

One of the most popular model release apps for Android users is the Model Release Pro. Its intuitive interface allows you to fill out the forms in less than a minute.
Model Release Pro has buttons for Shutterstock, Adobe Stock, Getty Images, and more. All you have to do is tap the type of form you want, and it will pop up on the screen.
The only caveat is that you can’t create customized forms which can be a dealbreaker for most.
Regardless, if you take photos for the major stock agencies, then this is all that you need. The download is free. But in-app purchases are necessary to unlock all the features. 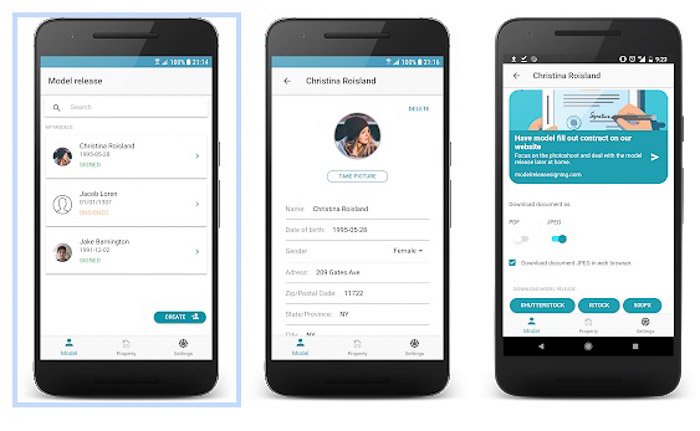 Another useful Android release form app is the Model Release X. Don’t let the simple interface fool you. It’s a powerful tool that can compete with the other major apps out there.
Model Release X allows you to import Google contacts to fill out the forms. It would save you a lot of time since you don’t have to type in all the information yourself, anymore.
With Model Release X, you also don’t need a separate release form for a minor. Just enter your young model’s birth date, and the app will include “Parent or Guardian” on the signature page for you.
You can try out the demo version of the app for free. But if you want to remove the VOID watermark on your PDFs, you’ll need to buy the full version for $9.99. 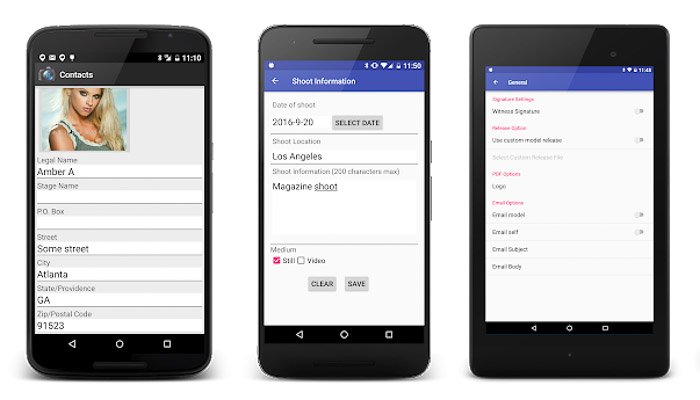 Adobe Acrobat is not a model release app per se. But it’s still a useful tool to convert paper forms into digital PDFs. You’ll find it useful especially if you have documents that you can’t customize with other apps.
The standard method most people use is to scan paper forms to digitize them. But what if you don’t have a scanner? With Adobe Acrobat’s Fill and Sign, all you have to do is take a photo of it with your camera.
The app will then turn it into a PDF which you can use to sign your documents on your screen. And since your file is now in digital form, you can save it online and send it to other people with ease.
Adobe Fill and Sign’s versatility should make you consider downloading it on top of a regular model release app. Besides, you’ll need it to open all of your PDF files, anyway.
After all, you can expect plenty of paperwork as you involve yourself with more commercial work.

Most of these apps have the same features. Choosing the right one for you is all a matter of figuring out if the forms would be compatible with your needs.
Thankfully, many of them also have demo versions so you can try them out before buying them.
They tend to cost more than other types of apps, so take your time to check everything before you pay.