The GoPro Max is not the usual incremental evolution of the famous GoPro action camera. Rather, it is a new interpretation of the action cam. It shares some of the looks and many of the features. But GoPro says that it is three cameras in one. And one of those three is the brand-new 360-degree capability.

So, does the GoPro Max deliver on its promise of not just being an exceptional action camera in the usual way, but also adding the wonders of 360-degree views? That’s what we hope to tell you in this review, so let’s go!

GoPro Max
Capture the most thrilling moments of your life with this 360-degree action camera, giving you an immersive experience.
Buy from Amazon
×
GoPro Max

Many of the specifications reign similar to GoPro’s other offerings, such as the Hero8 Black and Hero7, but have been greatly improved.

The GoPro Max Action Camera features 18 megapixels, 6k30 source video, 2x slow-motion capture, 1080p live streaming for all the social media mavens out there, a vibrant and responsive touch screen, 16-foot waterproofing, spherical HERO capture (for those delicious 360 shots), spherical audio via multiple microphones all over the camera, and new modes such as PowerPano.

Keeping true to the GoPro promise of small but powerful, the GoPro Max is tiny and portable. Sized at 69mm tall and 64mm wide, this guy is small and inconspicuous still (despite being a tiny bit larger than the Hero8).

In terms of feel, the Max seems to be built out of the same material as other GoPros. It definitely has a familiar feel and handling to it. 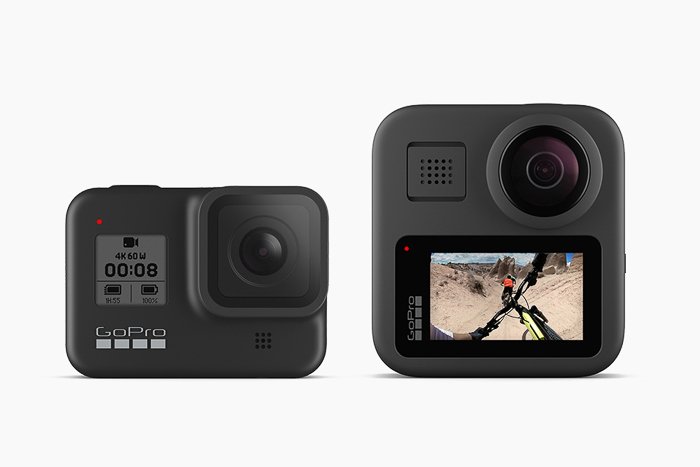 The design of the lenses themselves allows you to easily add protective transparent lens caps. These lenses are not removable as in other GoPro versions so keeping them safe is key.

That being said, the Max is shockproof and waterproof, rated at 16 feet underwater.

The added color touchscreen is vibrant, large, and easy to use. This makes quick adjustments while engaging in an extracurricular activity easier. And for those obsessed with aesthetics like I am, it’s a much more pleasant experience.

The bottom of the nifty camera features the same mounting system as the Hero 8. It has small little legs that pop right into various GoPro accessories and can be folded away when not needed.

The card slot is now a single MicroSD card, rather than a dual SD. 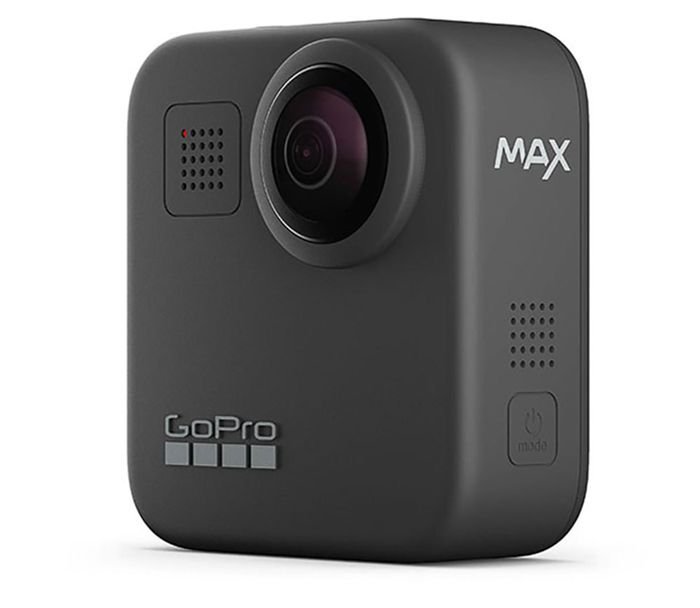 The Max is chock full of fun features, and additions that make it different from other GoPro models.

For starters, the lens itself has been upgraded. GoPro added a single-lens Hero mode which mimics the original GoPro a wee bit. Multiple lens modes are now available, including the Max SuperView which is an ultra-wide-angle view. There is also a PowerPano which creates a really eye-catching panorama shot at a 270-degree angle. All of these lenses are also distortion-free. There is a built-in horizon levelling feature in the camera itself. So no need to use the application!

The Max HyperSmooth video stabilization system is much more powerful than its predecessors. It’s able to smooth down footage that would otherwise feature some bumpiness in earlier models. Great for the mountain bikers!

The audio system is very impressive in the GoPro Max. This model adds a shotgun microphone in 6 different points around the camera. This creates a full 360 directional audio experience.

Of course, the 360-degree footage capability is one of the biggest selling points. And the Max has keyframing built into the mobile phone application to reframe the view from 360 footage. This is a huge aid in creating shots that would otherwise be impossible. 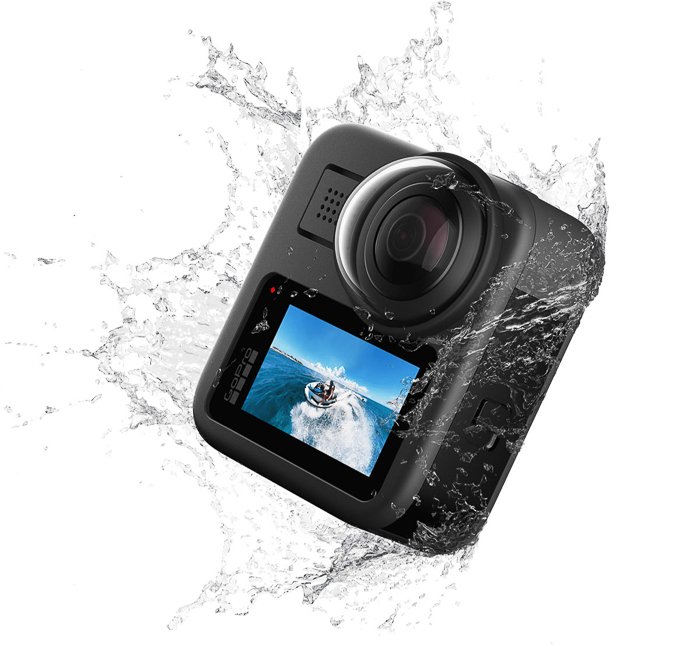 The camera can be voice-controlled with 12 different commands, allowing hands-free use.

Finally, you can now live stream to your favourite social media accounts in 1080p rather than the previous 720p!

On the downside, some features have been removed. As the GoPro Max Action Camera is focused on video rather than photo, a lot of photography features have been scrapped from the design. This includes the removal of burst mode with still shots, no more Night mode, and no more RAW still capture.

I am a stills photographer, so my primary objectives are cool still images (despite the GoPro being best known for video). You have to keep in mind that these small action cameras cannot compare to professional-grade DSLR or mirrorless cameras. Therefore, keeping perspective is key.

With this in mind, the image quality is lovely out of the GoPro Max. It’s higher quality than your cell phone and the various modes can tone the images quite nicely. There is quite limited compression and the lenses are as distortion-free as you can get with the fact that they are wide angles.

The high dynamic range is not so intense that the images look like video game screens. It’s HDR is just enough to bring a real pop and wow factor to your images.

Another fun fact, you can even shoot vertically for Instagram Stories format.

I’m a GoPro newb who has never really used the product much myself. But even I was able to figure out this camera easily at a tradeshow.

The menu and touchscreen are very user friendly and intuitive, there is no gimmick or difficulty about it. You can see exactly what you’re filming in real-time! There are physical buttons on the camera as well, such as the shutter and the power/mode button.

The app adds a slew of new capabilities to the camera and makes it even easier to operate. Anyone can pick this up and use it! 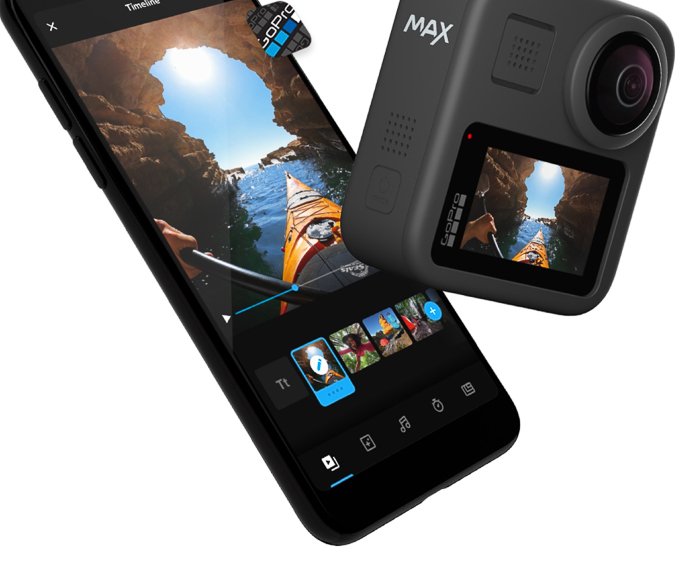 Who Is the GoPro Max Action Camera for?

Anyone who enjoys the quality, build, and usability of GoPro will be pretty enthused with the Max.

Content creators, YouTube stars, Instagram-savvy folks, and adventurers are all key target audiences for this particular camera. Even the layman user who wants a fun action camera to play with will find enjoyment out of the Max.

At $499, this is one of the more expensive cameras that GoPro has to offer. However, this camera does have more features than the other models and two lenses rather than one.

For vloggers, the selfie view is incredibly useful, so it’s worth paying a wee bit more for. As such, the features do tend to justify the steeper price.

In conclusion, if the features of the GoPro Max entice you, it is well worth the price tag. Although on the more expensive side for GoPro, the durability of the Max is granted to last you a good chunk of time.

The unique variety of built-in lenses and 360 footage capability will capture some eye-catching scenes. And it can breathe new life into everyday city life.

The front camera is excellent for vloggers. Your popular YouTube views may even help the camera pay for itself!

GoPro Max
Capture the most thrilling moments of your life with this 360-degree action camera, giving you an immersive experience.
Buy from Amazon
×
GoPro Max