Prom is one of those events that you document in a young person’s life, right there with high school graduation or senior photos.
Prom pictures are full of emotion, both for the teen and their parents.
Here are 10 tips to help you make both teens and parents happy and capture some great prom photos. 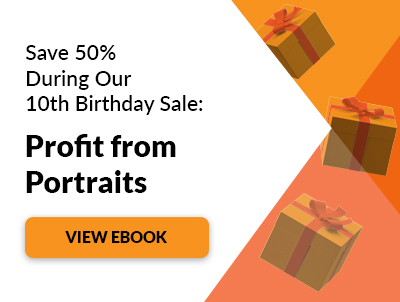 Teens are at a stage where they are very aware of their outer image. This means that sometimes they can feel a little intimidated by the camera.
Take this into account and take photos that keep the mood light and natural.
Have the teens talk with each other before posing them. This can create natural conversation and give you the opportunity to capture some cute candid shots.

If you notice that the session is getting a bit stale, opt for a quick break. Photograph the in-between moments. This is when teens tend to be the most relaxed and natural.
This way, you’re able to capture them as they are during this right of passage event.
A break also keeps the session from getting stagnant, boring, or awkward.

9. Zone In on the Details

Prom is one of those events where teens make detailed decisions over each aspect of the evening.
The choices that they have made can include anything from their wardrobe, shoes, transportation, to flowers for corsages and boutonnieres.

Teens like to feel heard and seen. Photographing these details is crucial to this. It will show appreciation for the time and effort that they put into making the night important and meaningful. 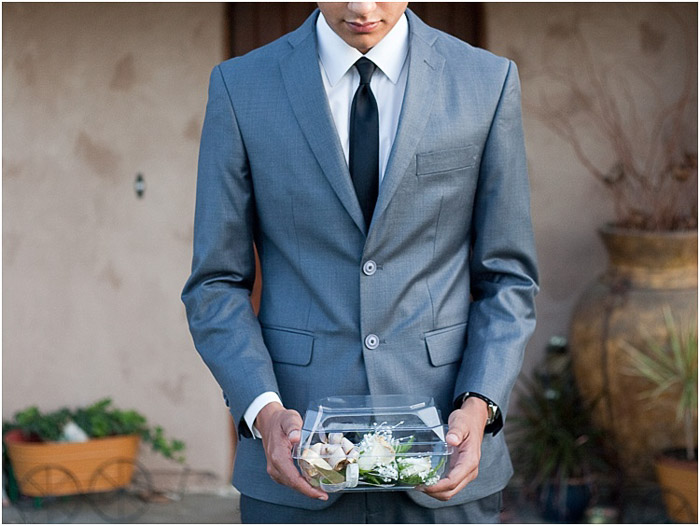 Ask the teens before the session if they have decided to do something special as they arrive or take off.
This is also important to capture because it will add to the story of their prom night experience.

Take photos of each person with different focal lengths. One up close, another mid-length, and another full length.

Try to choose a background that will allow you to photograph each teen with these three focal lengths. That way, all three photos match in style and lighting. 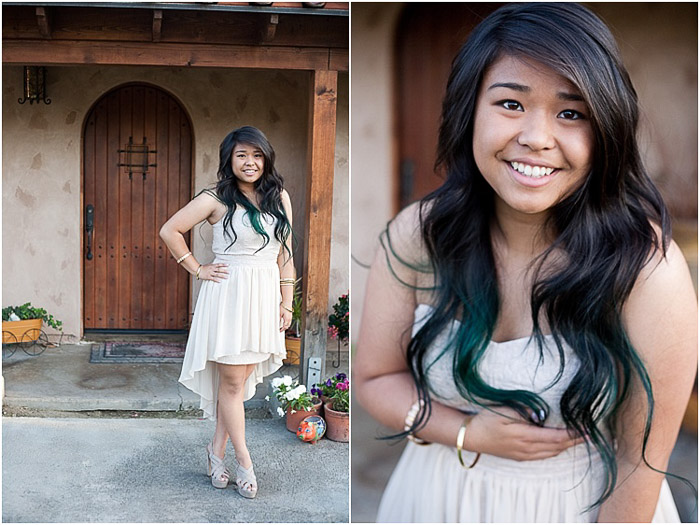 Try scheduling the individual prom photos in-between the group or couple photos. This can help break up the session so that it doesn’t get boring.
It can also give the other teens a break and time to relax between portraits. Many times, it’s a great time to check makeup and adjustments.
Make sure that each person has their full wardrobe on including florals. This way the final portrait isn’t missing any important detail of their wardrobe.

7. How Much Time Should You Schedule for a Prom Photo Shoot

Prom photos need a bit of time so that you are able to capture the emotions, wardrobe, and details of the whole evening. Especially if you are photographing more than one couple.
You will also give the teens time during the session to take breaks, enjoy the excitement, and make adjustments or fix details. This can make all the difference in the final photos as they won’t look so stiff. 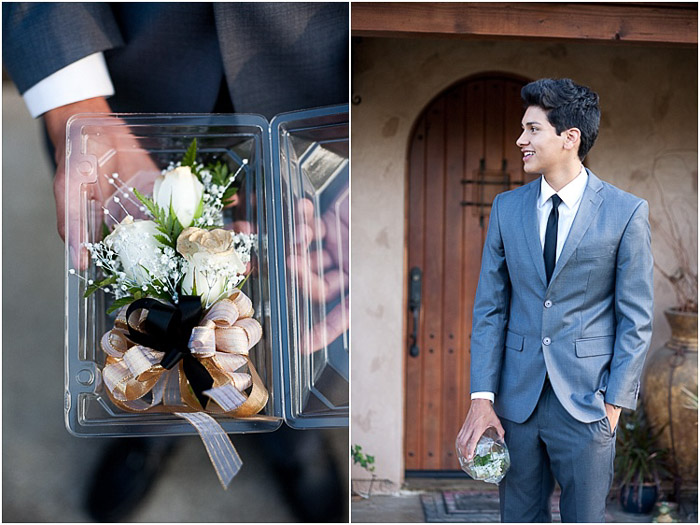 Schedule the prom photos at least an hour and a half before the teens leave for prom.
For groups, schedule the session at least two hours in advance. This way you’ll have enough time for individuals, couples, and group photos.

Flash can be useful especially if you have to photograph the prom photos indoors. But flash can cause sheer fabrics to come out shiny with the added pop of light.
Some fabrics that are layered or see through may not come out right if you use flash.

If you have to use your flash, try bouncing the light off a white ceiling or adjacent wall.
Using your flash tilted at a 65-degree angle and backward can also help fill in without being too harsh.
Using your flash in manual mode can help you control the power of its output. You can get the desired amount of light without it causing too many problems.
It won’t create too much light on the fabrics or overexpose your images. 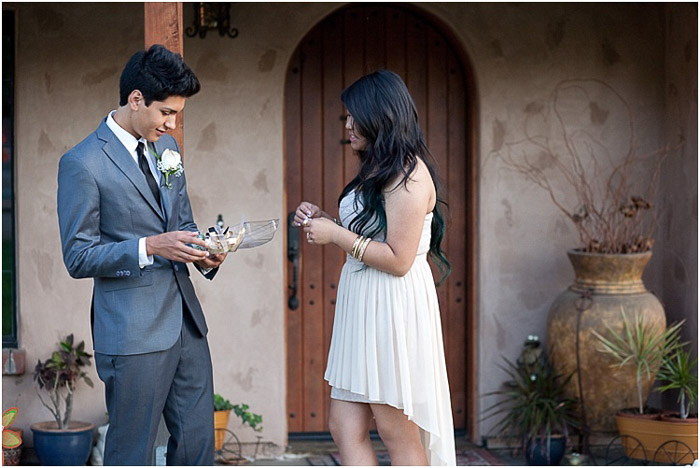 The best option would be to use your flash off-camera on a flash stand. You’ll be able to control where the light is coming from and how close or far away you need it to be in order to light the whole scene.
This is especially important for group photos where more teens are involved.

5. How to Pose for Prom Photos

When you are posing couples, try to keep the poses light. Not all teens who go to prom together are necessarily dating. It can get awkward fast if you try to pose the couples to reflect more than they are.
Try to pose the couples close together with their arms above the shoulders or lightly around the waist.
Capture natural posing, for example, when the teens are putting on their corsage or boutonniere.
Photograph all the in-between moments as well. This means the awkward laughs, the expressions and all the other fun poses. Even conversations where they are being really expressive.
Capturing a natural smile when they’re not paying attention is much better than a crisp, nervous expression.

Another pose that can loosen the stiffness and break the ice is to have the prom couple walking. They can walk toward the camera or depending on the location, walk away from the camera.
You can also pose the couple dancing and having fun. This can look really sweet.
Don’t force poses that are clearly uncomfortable for the teens. During this time in their lives, they are very aware of how awkward dating and social situations can be. So make sure to be sensitive to their emotions.
They won’t want to look back to their prom shoot and cringe. Nor will the family members paying for the portraits enjoy that.
You can also use the location to pose the couple or individuals. Have them sit on steps, or stand with one arm on a shoulder while the other has their hands on their hips.
This makes the pose more friendly and less engagement-style.

Posing groups can get tricky but try getting one group photo of all the prom couples posed together. Then have fun by mixing it up.
Ask the group to go in for a group huddle or hug. This can bring about lots of laughs and un-posed fun.
Don’t forget to get photos of smaller clusters in addition to the big group photos. For example, just the girls or two who are best friends. Do this for the boys too.

Teens are really excited to enjoy themselves at prom. This also means that more often than not, they aren’t too concerned with spending lots of time taking photos.
Make sure to work quickly and have your locations scouted before the session. That way you can move through each set of photos quickly. 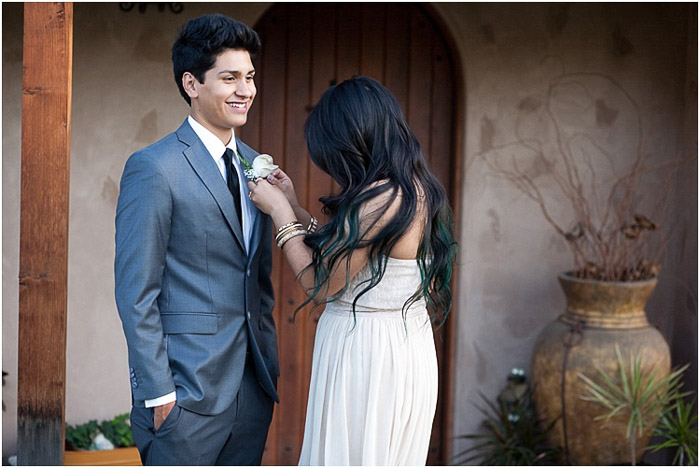 Have two or three poses in mind ahead of time. You’ll be able to pose quickly without missing all of the in-between moments either.
Giving the teens breaks when you’re working with another couple or individual can also help keep things relaxed.
You can also play music to get the mood set and keep the excitement up.

3. What Props to Use

Using props can make the prom session even more fun! Use streamers or confetti pops to add to the excitement will not only be fun for the couples but also fun to photograph!
You can also use signs that read “Prom 2018” or something that goes with the prom theme at the teens’ school. 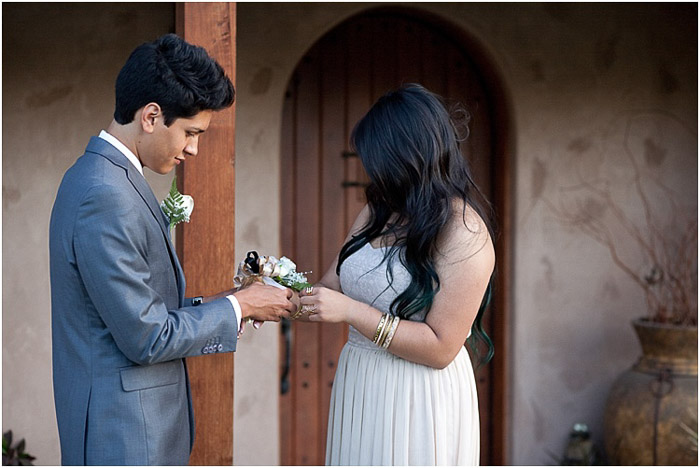 You’ll also find that some teens pull together to rent a car or special transportation to arrive in style to prom.
You can use this car, limousine, etc. as a background or prop for some of the photos.

2. Give Parents Time to Document the Event as Well 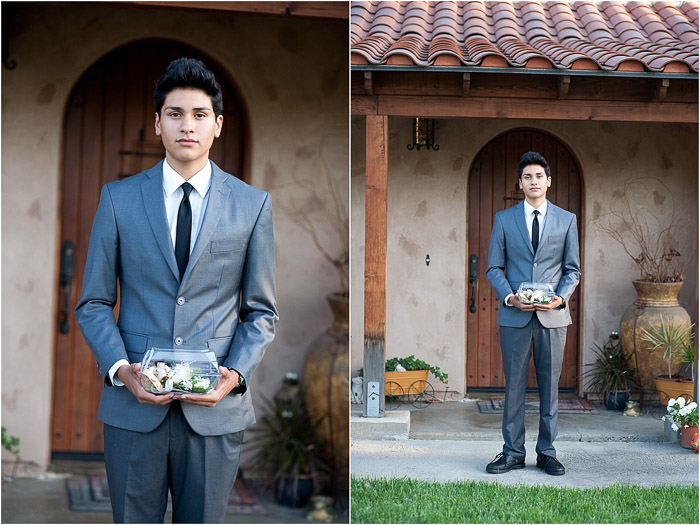 If you have a chance, get a photo of the parents with their child both individually and with their date.
Some may not be willing and that’s okay too. But don’t miss the opportunity by not asking.

1. Ask the Teens If They Want Anything Special

Before you wrap up the prom photos, ask the teens if there is anything that they wish for you to photograph.
Teens can feel like the photos are more for their parents. Asking them if they would like a particular photo gives them the chance to direct their own prom photo session experience.

Maybe they want one of them inside the limo peeking through the sunroof. Or maybe they saw a photo that they’d like to try with their friends and then post on social media.
This is a great way to give them photos that they will also be excited to see and share with their friends!
Including teens into the session experience is a great way to create more referrals and to give them something that perhaps you didn’t think of in terms of poses, photos, or ideas.

Prom photos aren’t just for parents. Giving the teens the best prom portrait experience can mean working quickly and taking lots of candids to really capture the emotion and excitement of this fun evening.
The most important tip for prom photos is to keep things light and fun. Both teens and parents will appreciate the fun experience. 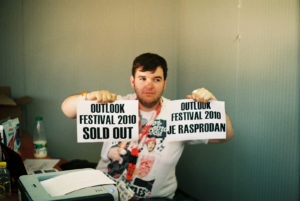 How to Use Window Light for Portraits

Window light is an excellent, free light source. It can achieve the same effects as much bigger, more expensive lighting equipment. A large window is… 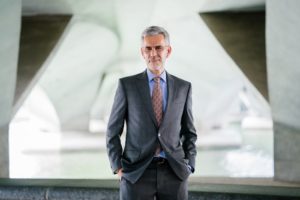 A Photographers Guide to the Best Male Poses

Most posing tutorials focus on the female form, and there isn't that much information available on how to properly pose men in a photo. And even…