Is mirrorless going to be the industry dominant? We don’t know. What we do know is that the largest camera brands in the world are all taking a massive plunge into the mirrorless camera world!

Whether or not this new technology takes over, it has revolutionized how we take photographs. Canon is no exception to this rule.

Canon made a big splash in early 2019 with their announcement of the year’s forthcoming mirrorless RF lenses. The incredible optical advancements will make you drool in anticipation.

Here’s our review of the upcoming Canon RF lenses. 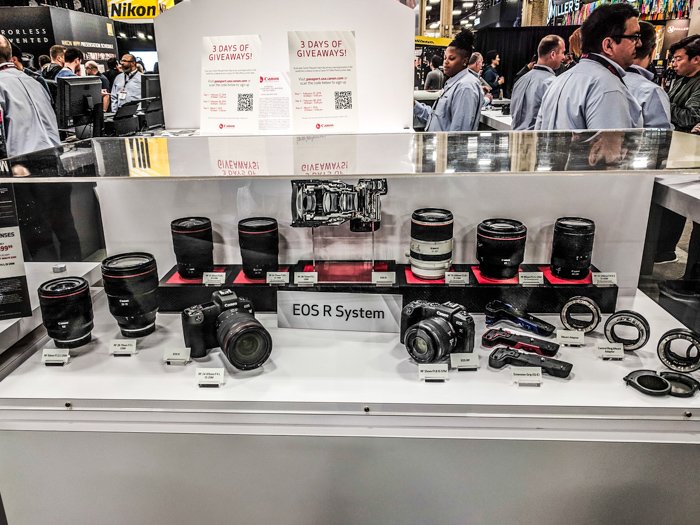 These are all excellent models, essentially a similar difference between the Canon Rebel series and those of their higher grade models.

The RF lens series is designed exclusively for Canon’s full frame mirrorless line. That line has a completely different mount than the M series.

The RP is more a prosumer-level model at 26 megapixels. It enjoys professional features in an intuitive user-friendly interface.

The R is a professionally driven 30+ megapixel mirrorless model.

Both of these cameras feature state-of-the-art advancements, autofocus reliability, 4K video capability, and so much more.

The RF line of lenses aims to bring out the absolute best in these nifty camera body characteristics. 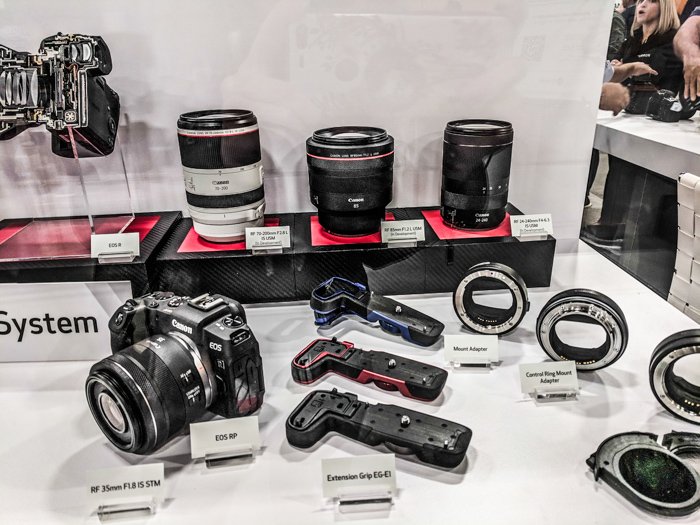 All of the Canon RF lenses in the lineup (current and upcoming) will enjoy these key features. The first (and one that I am quite partial to) is the addition of a control ring on the lens barrel.

Pair this with the fact that the full frame mirrorless cameras now display lens information right in the viewfinder. This makes it easy to confirm the lens’s focal length without looking away from the subject at hand.

These two allow you to take photographs without looking away from your subject!

As well as this, certain high end Canon RF lenses feature optical image stabilization technology. This is designed to work in conjunction with the EOS R and EOS RP cameras.

When image stabilization communicates between the lens mechanical functions and the camera body’s, there is little you can’t accomplish. 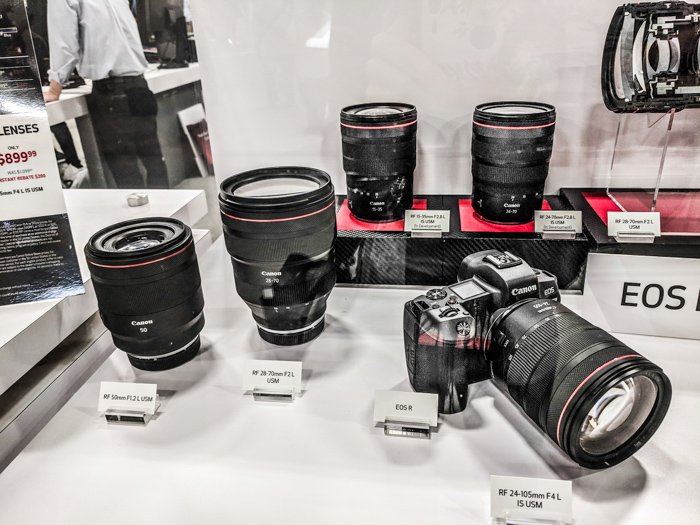 What may have partially warded users off of the full frame mirrorless cameras was the lack of available optics for these models.

Canon’s full-frame mirrorless cameras are really quite new additions to the company. There simply isn’t a large selection of glass to accompany the bodies.

Canon is running ahead of the race to remedy this problem. They unveiled a release lineup of five brand new lenses for the RF mount. Several of these are focal lengths that a lot of photographers will enjoy. 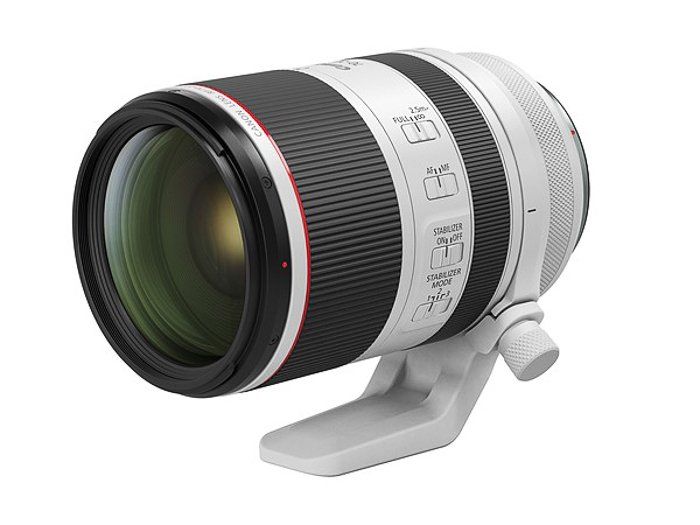 When I saw the prototype model at the WPPI conference and convention in Las Vegas in February, I was blown away.

The 70-200mm F/2.8 focal length and aperture combination is one of the most, if not the most, beloved lenses ever.

The lightest telephoto lens that still delivers incredible quality and workhorse properties. The 70-200mm has been capturing everything from sports to weddings for many years.

With the brand new RF mount, Canon was able to do something that was previously achievable with this particular version of the famous lens: make the lens short, small, and lightweight.

I would happily exchange my now-bulky Canon L 70-200mm lens for this one! This revolutionary design is due to the width of the brand new RF mount (alongside some trade secrets, of course).

As well as that, this lens will be utilizing Canon’s brand new NANO USM technology. NANO USM is a new type of ultrasonic motor. It is engineered to help deliver high-speed, smooth, precise and near-silent operation, plus full time manual focus you can switch to easily.

The RF 24–105mm F/4 L IS USM (already available for sale) was the first lens to utilize NANO USM. It is repeatedly mentioned to be the fastest autofocus of the lineup as a result.

You couldn’t ask for better from a lens used for sports and action photography. 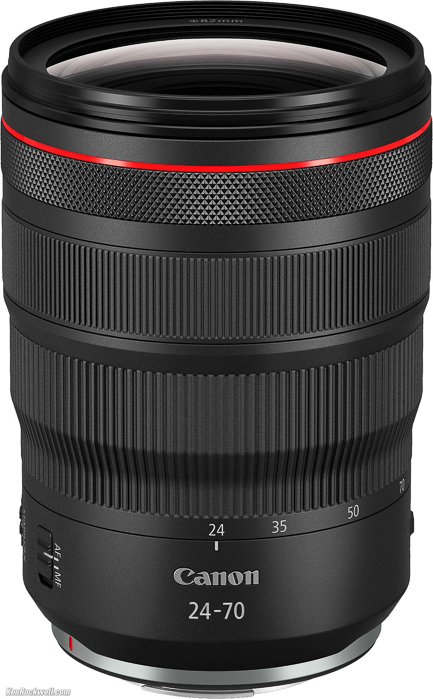 This one is fondly known as the “walk around lens” by professionals and hobbyists alike. The 24-70mm lens is the staple of any photography kit!

It would be odd for Canon to not eventually release a version of this lens for the RF mount cameras.

Unfortunately this lens is not as impressively small as the 70-200mm. It’s actually a bit on the bulky side. But the inclusion of this focal range made me much more comfortable with the R and RP cameras.

A notable difference between this model and the comparable SLR model is the inclusion of an image stabilization system within the lens. The SLR versions lacked this and that was frustrating to say the least.

The image stabilization system here is state of the art and sure to impress. Much like the previously mentioned telephoto lens, this one will also utilize NANO USM technology. 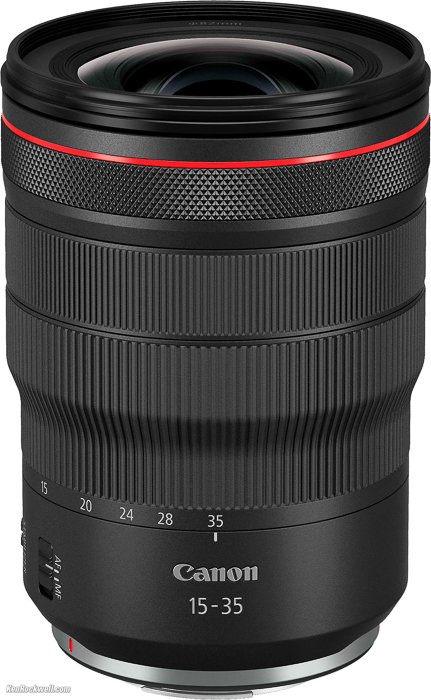 I own a 16-35mm F/2.8 L lens from Canon for my DSLRs. Seeing a 15mm in front was interesting! You’d be surprised how much that one millimeter difference makes in your image (for the better).

Most photographers don’t have many lenses beyond these three staples actually.

This lens looks almost exactly like the 24-70mm lens. It’ll be interesting to see the two hanging out in the same camera bag.

Much like the previous two, this lens will have a Nano USM motor. It finally receives image stabilization, too. 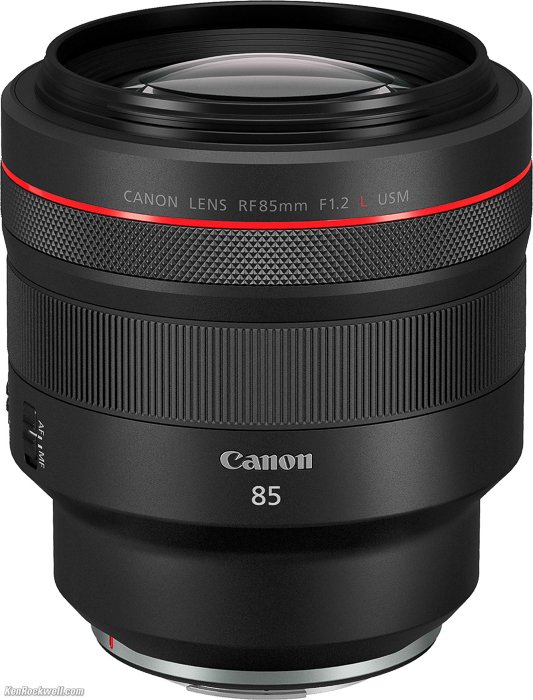 When doing some follow-up research on the RF lenses after my experience with them at the WPPI trade show, I found something interesting about the 85mm lens.

Canon is actually going to release two versions of this same lens. One with the inclusion of a new feature called DS and one without.

DS stands for ‘Defocus Smoothing’. It promises improved bokeh, compared with the standard version. We will comment further on this feature once we have some lenses to compare!

Otherwise, much in the same vein as the release of the RF 50mm F/1.2 lens, it would have been a big mistake not to also have the 85mm F/1.2 version available.

This particular lens in the DSLR mount is a big favorite. And it has the shallowest depth of field of most of Canon’s competitors. This lens is by far one of my favorites.

This lens is fairly big, but so is its comparable version. This makes sense as the wide aperture needs plenty of space to function.

This lens does not feature the NANO USM. It is far too large and heavy for its inclusion. The traditional USM motor is present and works fine (as can be seen in the original version of this lens). 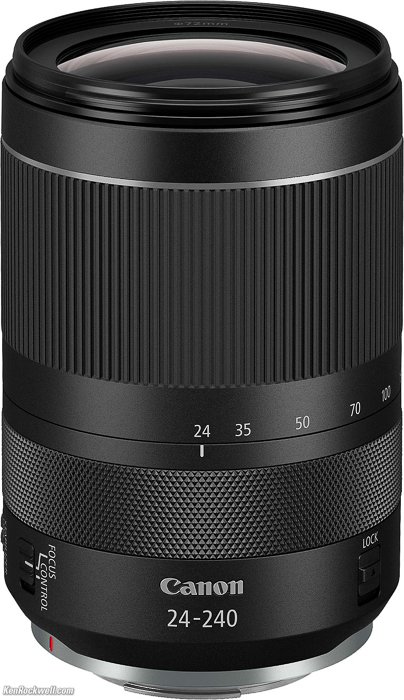 The final announcement was that of the RF 24-240mm F/4-6.3 IS USM zoom lens. This is not an L glass lens. It is aimed less at professionals and more at consumers and prosumers. The expected price will likely reflect this.

This lens is designed as a do-everything travel zoom. It has a 10x zoom capability, similar to the already available RF 24–105mm F/4 L IS USM.

RF Lenses Already on the Market

There are four lenses available right now for the RF system. These are great options to hold one over while awaiting the aforementioned five (six if you count the two different 85mm versions)! 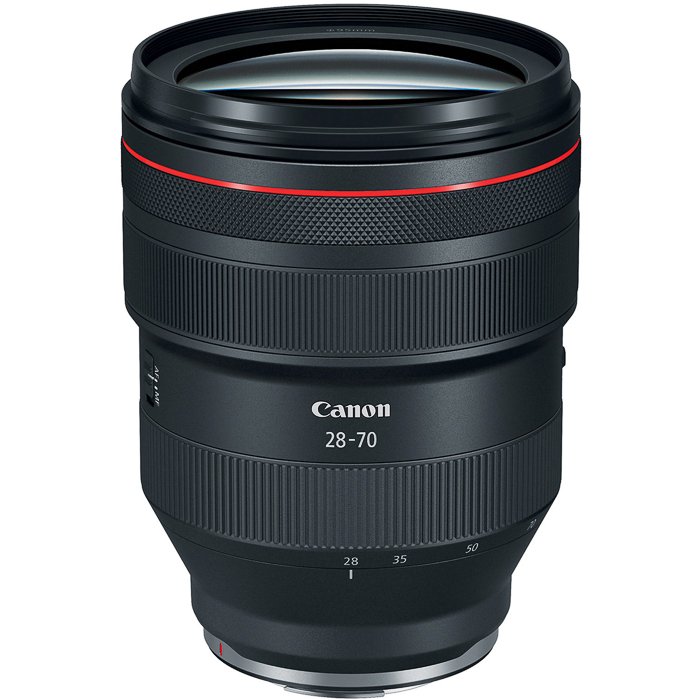 Similar to the 24-70mm range, the 28-70mm is another excellent walk around lens. This model has the added perk of being an F/2 wide aperture rather than an F/2.8.

The F/2 is a great perk for shallow depth of field lovers (like myself) and those that photograph in dimly lit conditions (also like myself).

Paired with the L series optics, this is a brilliant choice for a wide range of subjects.

A fantastic added bonus to this lens is that it features corner-to-corner sharpness despite the shallow depth of field. Wherever your subject is positioned, you can rest assured that the sharpness will be intact.

This lens also has vibration shock resistance in the lens barrel. This helps it maintain focus and settings even in turbulent situations. This lens is also weather sealed with the glass being fluorine coated. 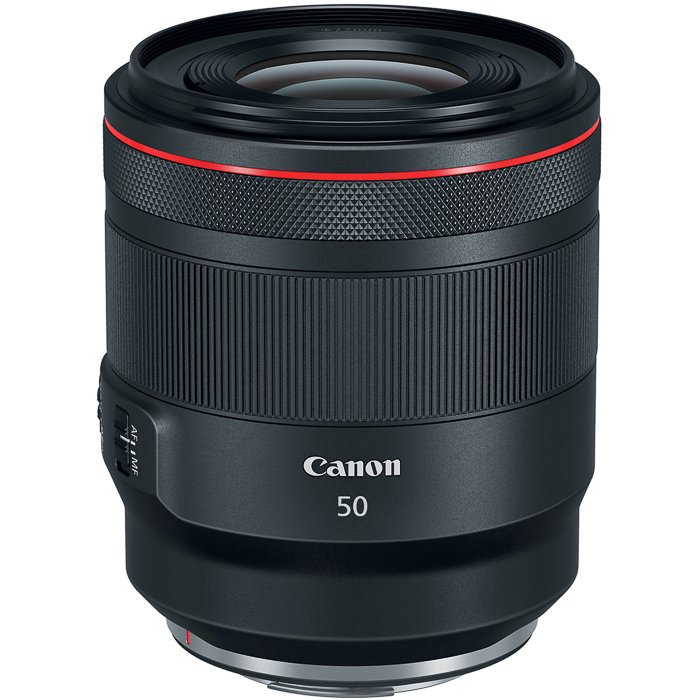 This model is my absolute favorite in the EF mount versions. I pair it with all of my full frame Canon DSLR bodies!

I was very excited to hear about this brilliant fixed lens for the Canon RF mount cameras. The inclusion and availability of this native lens in the lineup is actually what encouraged me to give the R camera a shot!

The RF 50mm F/1.2 L USM has an incredible wide aperture with circular blades to make your bokeh fantasies come to life. Added to this is a very close focusing distance. No location is too narrow for great pictures.

The nifty fifty focal length is superb for a very wide array of subjects. It is very close to the human eye, which makes the focal length lack a learning curve like other focal lengths.

The edge-to-edge focus is another great feature to this F/1.2 lens, something that is often lacking from super wide apertures.

There is little to no chromatic aberration or flaring issues, due to the glass being brilliantly coated and calibrated.

A really cool feature in this particular model is its great communication with the camera body. 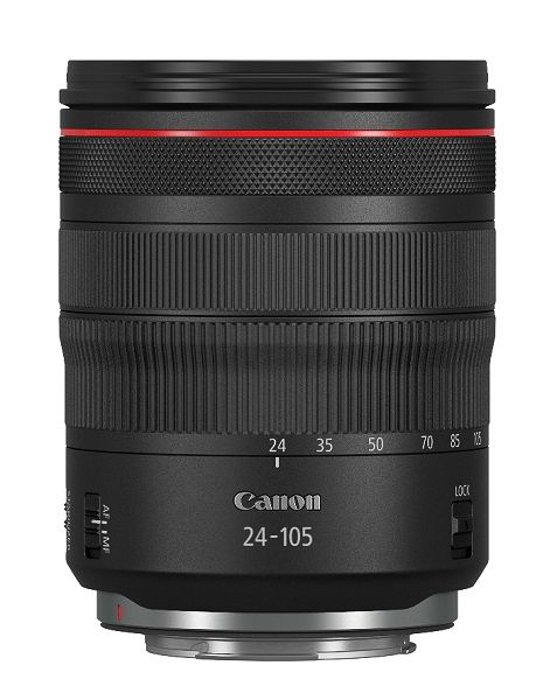 The 24-105mm is a fantastic zoom lens for the traveling photographer, able to capture landscapes all the way to faraway critters on the mountain tops.

The f/4 aperture may not be as wide as the 2.8s and lower numbers, but still lets in a great amount of light and has a lovely depth of field.

The 5-stop Image Stabilization system included in this model allows for powerful performance while being handheld and in low light.

The size of this lens is nice and compact for what it is. It’s easy to toss into any bag before you head out on the trail.

This is the first lens in the lineup (that is currently released) to feature Canon’s brand new NANO USM technology, which paved the way for other lenses to incorporate this feature.

As a direct result, nearly all reviews cite this particular lens as the most accurate focus of the entire RF line. 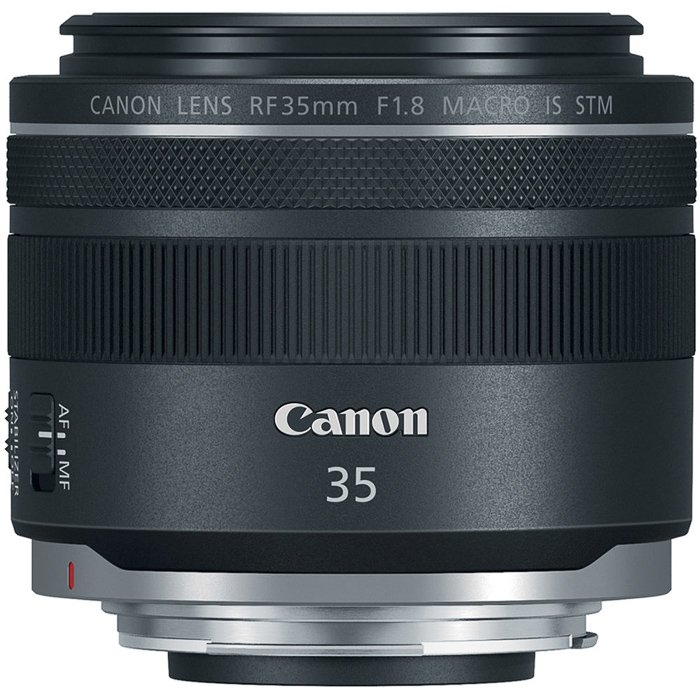 Next to the 50mm, the 35mm is one of the most popular focal lengths out there. It would have been a shame for the RF series to not have one of these wide angle beauties!

The RF 35mm f/1.8 Macro IS STM lens may not be a part of the L series, but that doesn’t make it something to look past. This lens is compact and versatile and has a superbly close focusing distance of 0.56 feet.

It features the same image stabilization system as some of the L glass, allowing for great handheld use.

You really won’t have to wait too long to have the lens lineup of your dreams!

For more great reviews, why not check our recent posts on the Sigma 70-200mm f/2.8 DG OS HSM Sports lens or Profoto A1! 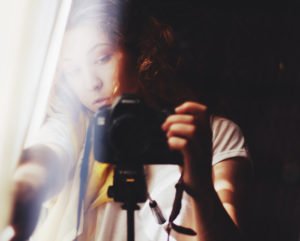 Photography Style: What Is It and How Can You Find Your Own 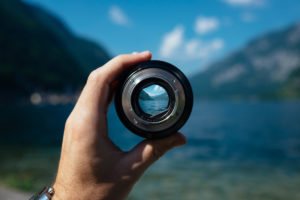 What Are Spherical and Aspherical Lenses?

Do your photos look soft towards the edges? Your lens might suffer from spherical aberration. The solution is simple. Use an aspherical lens to improve… 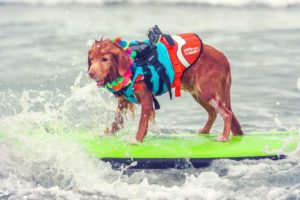 What Aperture to Use for Pet Photography

In pet photography, there are lots of different kinds of apertures you can use to capture images. There's the more journalistic approach with candid images…
See all articles in Beginner Photography