You can use foreground, middleground, and background to add depth and dimension to the image. These are often used in landscape photography. But they are also useful in other genres of photography.

Depth and dimension in any image add more interest in the eyes of the viewer. It makes them pause to take in different elements and how they work within the context of the frame.

Here’s how to use foreground, middleground, and background for better images. 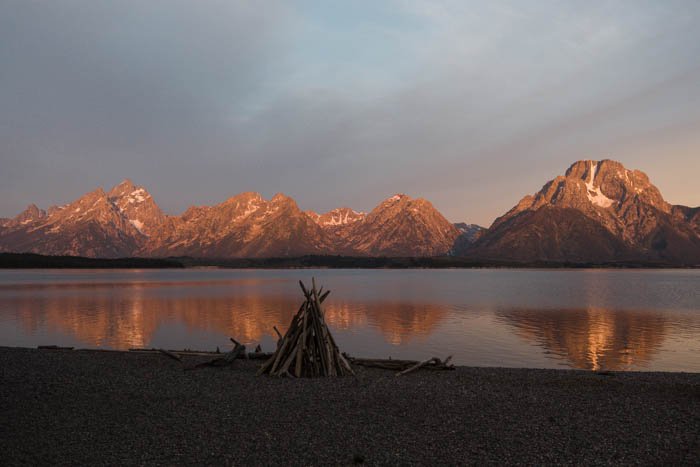 What Are Foreground, Middleground, and Background?

This might seem simple when it comes to scenes in real life which are often 3-dimensional. It gets a little tricky when you think about a photograph. Photos essentially compress all these elements into a flat 2-dimensional image. 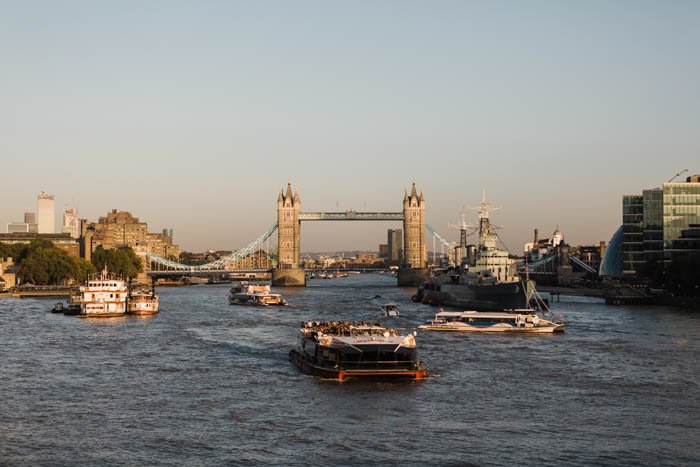 In the above image, the boat closer to the front of the frame is considered foreground. The boats behind this one are considered middle ground. The London Bridge and buildings behind it would be the background.

You can try putting the main subject in the middleground area and add elements or objects in the frame to act as the foreground and background. This can make an image more compelling and eye-catching. 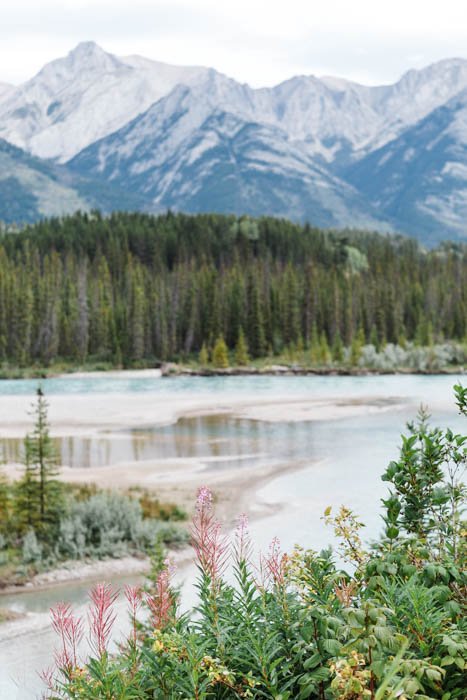 In the above image, the pink flowers closer to the viewer are considered foreground. Can you almost imagine peeling off this layer to see what is behind it?

The water and the trees behind the stream are considered middleground. Peel those back and you can see the foothills of the mountains.

The mountains act as the background. Peel back each layer of the mountains to see the entire range of hills.

On the reverse, you can imagine how adding each element to a blank canvas builds up layers. Think of how it adds depth to the whole image by way of background, middleground, and foreground elements.

How to Use Foreground, Middle Ground, and Background in an Image?

In an ideal situation, it would be great if the frame has something eye-catching in all three areas. This is not always possible. Especially when you are out and about photographing in the field or even in landscape photos.

You might find two out of the three elements easily. More often than not, we find images that have a strong background and foreground or background and middleground.

You might feel that these two elements are strong enough to carry the image.

You can use this technique with other photography rules too. Here’s how to use them to improve your photography composition.

1. Use This Technique With the Rule of Thirds

The rule of thirds works by dividing the frame into nine equal sections by a set of vertical and horizontal lines across the image. It says you should place the most important part of your image – the subject – on one of the spots where the lines meet. If you do this, then your composition is strong.

The rule of thirds adds an element of interest by ensuring that the subject is not always in the center of the frame.

By combining the rule of thirds with the concept of a distinct foreground, middleground, and background, you can further strengthen the composition of the image. 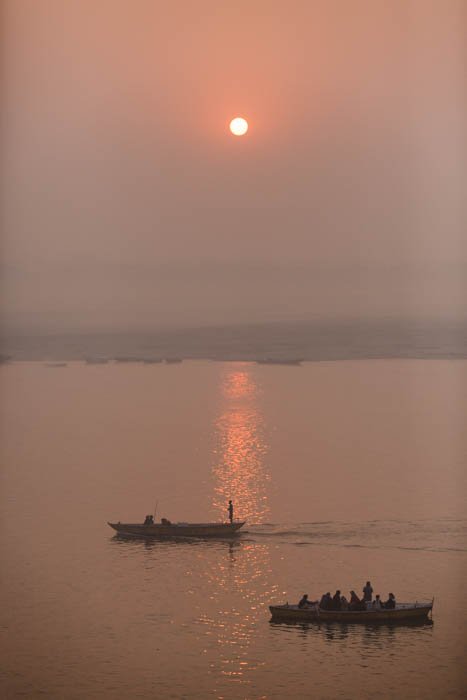 This is one of my favorite images of all time. Early morning sunrise over the ghats of Varanasi and the boats and well as the sun both are using the rule of thirds.

2. Use This Technique Leading Lines

The goal of using leading lines in an image is to help the viewer by drawing the focus gradually to the main subject.

Sometimes photographers use leading lines like roads, poles, or even buildings. These direct the eyes of the viewer to the main subject.

In other instances, the leading lines are more figurative, such as road signs or building signs. It could be a secondary subject that is used to draw the viewer towards the main subject in the frame. 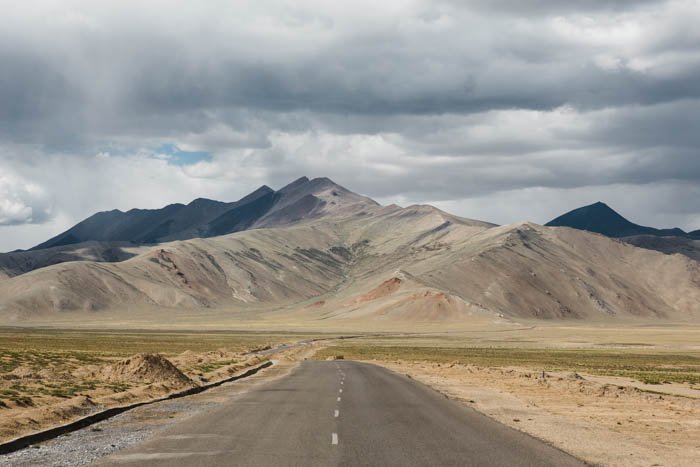 The most common leading lines are roads. These can naturally draw the eye to the main subject in the middleground. Here the middleground and the background are the same (i.e. the layers of the mountains).

3. Use This Technique With Creative Framing

Creative framing is a simple photographic technique. It helps you define the subject and elevate its relative importance in the image.

Frames serve to close the frame by preventing the viewer’s gaze from exiting the image. Framing elements are all around us. All it takes is a little careful observation and use of perspective.

Architectural elements, nature, color, textures, light and shadows, reflections, people, and objects are great ways to add depth and layers to your images. They can bring out a clear separation of the three different regions within the image. 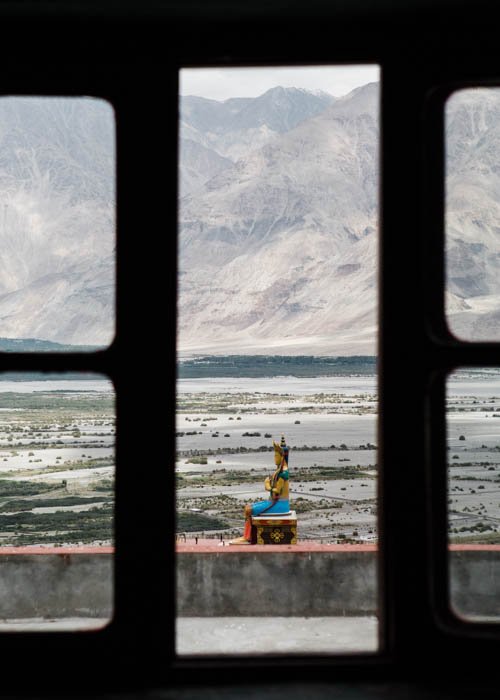 In the image above, the creative framing of the window acts as a foreground element. It draws the eye to the giant Buddha statue and the vast mountains in the background.

Most landscape photographers will always photograph at narrow apertures of at least f/8 and beyond.

Using a narrow aperture technique allows for all elements in the frame to be in focus and sharp. The distinct layers can be seen.

But rules are meant to be broken. Sometimes it is okay to shoot landscapes wide open. You can still get an image that has distinct layers albeit somewhat blurred out.

The bokeh effect of the background and foreground with an in-focus middleground has its own charm. And it still achieves the effect of distinct layers in an image. 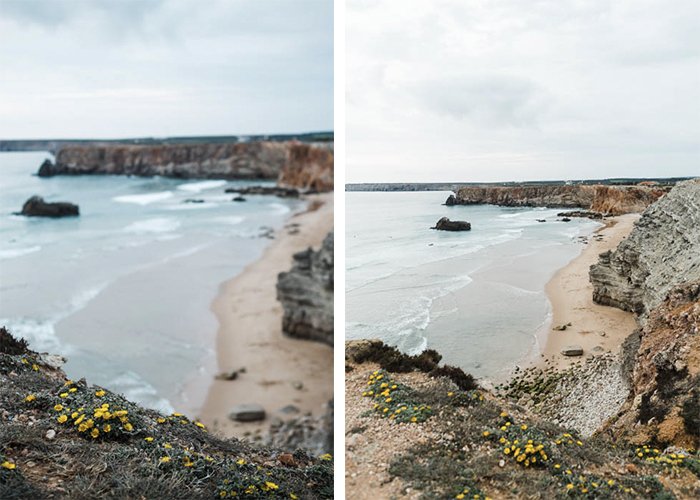 The image on the left was created with a wide aperture. The foreground flowers are in focus and the rest of the image is blurry.

The image on the right uses a narrow aperture. The middleground and background are in focus and the foreground (the flowers) are blurry.

How to Achieve a Layered Look in Post-Production?

Sometimes the technical and the creative ways of achieving the layered look of a foreground, middleground, and background does not always work out as you had hoped. For example, if you are photographing in mixed lighting situations—harsh light and shadows or even in low light situations—just before sunrise or sunset.

You can still achieve a distinct foreground, middleground, and background effect in your images. You’ll need to take individual photos (bracketing images) and combining them in post-production.

I am a big proponent of getting images correct straight out of the camera. But sometimes things are not under your control. Bracketing is a good way to achieve a distinct foreground, middleground, and background in your images. 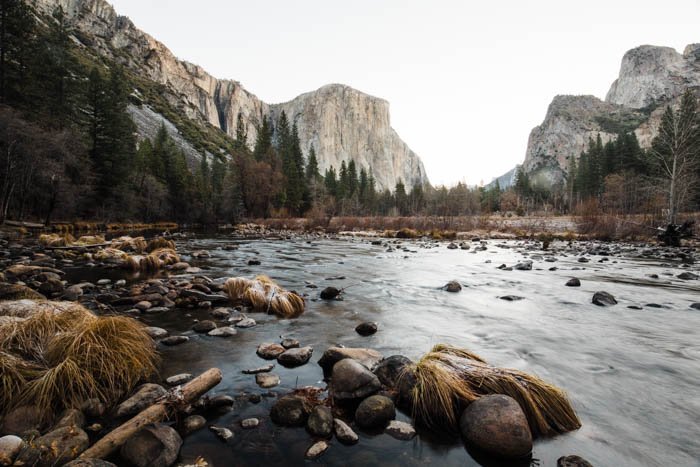 The image above is a merged image of the famous Half Dome in Yosemite National Park at sunrise. Because it was close to sunrise, it was really dark and I was not able to get both the foreground and the background in focus in camera.

Merging or stacking images can be done in Lightroom or Photoshop.

Here are the steps to do it in Lightroom.

1) Select all the images that you would like to merge.
2) Choose menu option Photo > Photo Merge > HDR.
3) Depending on the number of images you have chosen, it might take a few minutes.
4) In the HDR Merge Preview dialog, you can choose to apply Auto Align and Auto Settings on the images.
Auto Align straightens the images in case there is slight movement from shot to shot. If you have shot the images on a tripod, this might not apply. Auto Settings corrects the images automatically. But my personal preference is to leave this off. I like to color and tone correct images based on my editing choice.

It follows the same principle of having distinct layers or elements that make up the foreground, middleground, and background in a given image.

Understanding the difference between foreground, middleground, and background elements in photography is a great way to add interest to your images.

Look at images from some of your favorite photographers or even artists like painters. Take note of how they use layers in their imagery to create depth and interest.

This is a great way to train your creative eye to know what to look for in a scene even before you take a single shot. And we all know that images that have depth are much more interesting. And they’ll hold the attention of the viewer longer.

Check out our Intuitive Composition e-book to perfectly compose your images every time!