Throughout the history of the camera, there are a few cheap film cameras that gain a special status. Either they house some special feature, an interesting setting range, or simply, have a great shutter sound.

We aren’t talking about the box brownie or the original Leica. Firstly, they wouldn’t cost less than $100. We are looking toward vintage cameras that have cult status, that you can still find today 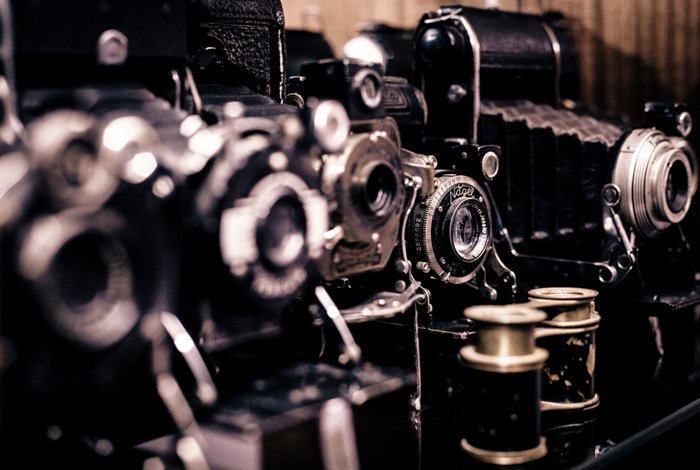 When we think about classic film cameras we wish we owned, many of us will stare off into the distance. Our eyes glaze over as we imagine another world where our everyday shooter was a Leica M6 rangefinder camera.

Unfortunately, the reality is harsh. The camera body alone costs upwards of $1,000.

Although the Leica may remain a pipe dream for years to come, I’m here with some good news. You can own a huge range of classic film cameras for less than $100!

Sure, brands such as Leica are famous for their quality and prestige, but so are many of the cameras on this list. Some of the sharpest images I’ve ever captured have been on a film camera that cost me less than $100.

In no particular order, let’s have a look at some of these vintage cameras now.

I love my Olympus Pen. The thing that makes this vintage camera so unique is that it’s a half frame camera. That means that each photo only fills half a frame, so you can fit 72 photos onto a single roll of film!

It also means that when you hold the camera in landscape orientation, you’re actually taking a portrait photo. 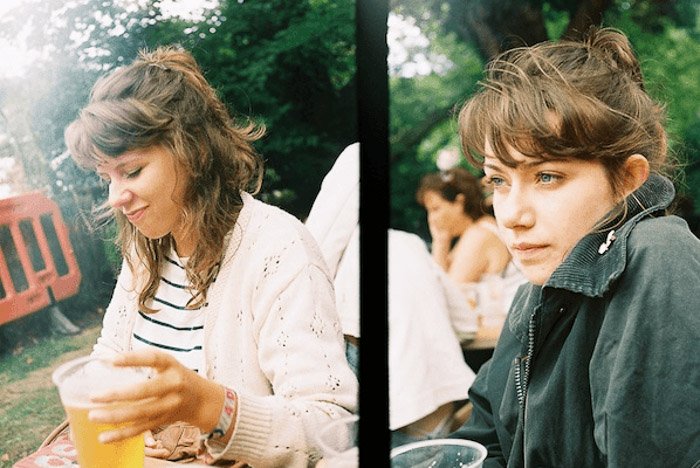 It’s a 35 mm camera that was produced from 1959 to the beginning of the ’80s, and it’s named Pen because of its size. Olympus thought it would be as portable as a pen… which it almost is! There are tons of different models of Pen available, even an SLR camera version, and digital camera versions too. 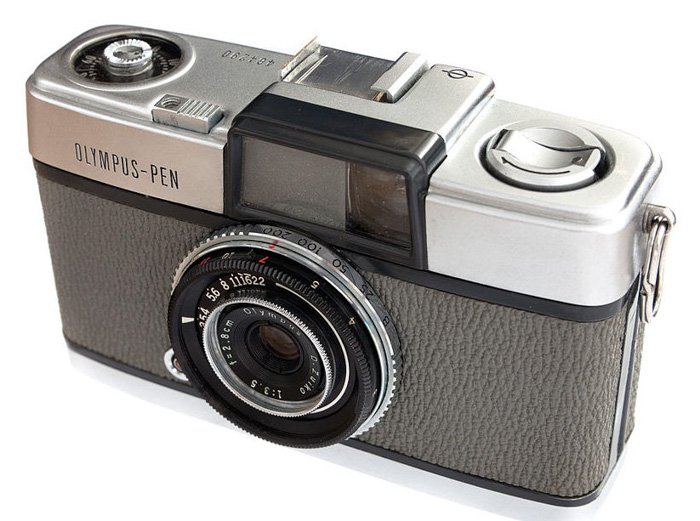 The Canon AE-1 was produced by Canon for nearly 10 years, which sounds a bit absurd when you consider our throwaway culture these days. But that’s just down to how good and popular this camera was.

This is Canon’s first affordable TTL (Through The Lens metering) camera, which added autoexposure modes as well as shutter-speed priority, which we’re all familiar with today.

Because of the low cost, huge advertising campaign, and added features, it became one of the most popular cameras of the time.

It sold over 1 million units! You would expect this from one of the best, vintage cameras. For a Canon film camera, this should be at the top of your list. 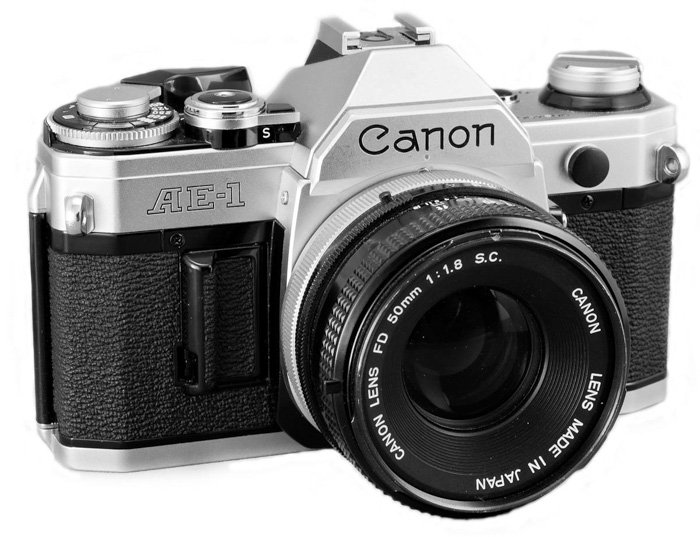 When the Rollei 35 was released in 1966, it was the smallest 35 mm camera on the market. Even today it remains the second smallest in compact cameras.

Like many film cameras, they were produced for a very long time so there’s a wide variety of models on the market. Something you’ll want to look out for is light leaks, as they can be quite common in older cameras.

Here’s a photo I took on mine recently: 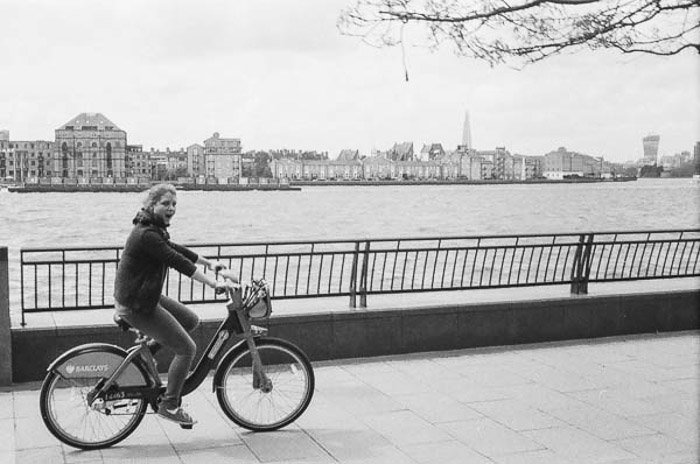 Something interesting about this is it’s such a compact camera, the fixed lens “folds” into the vintage camera. And the hotshoe is on the bottom as there’s no space on top. Check out this video I made of the one I own: 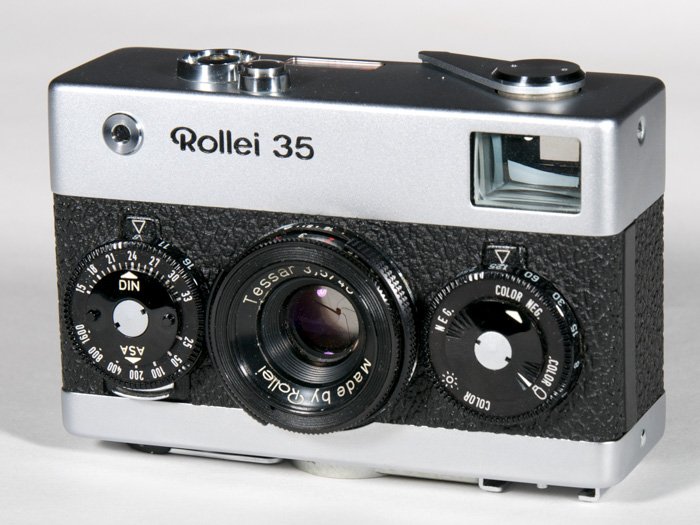 When it was released in 1972, the Olympus OM-1 was a change of pace in the SLR world—a smaller, lighter, and quieter 35 mm camera among big and bulky peers.

This mechanical camera was Olympus’s conscious step towards making pro-level cameras that were more compact and user-friendly.

Some of the features included were mirror lock-up, a self-timer, a through-the-lens meter, and depth of field preview (via a button on the lens). The slimmed-down design was a hit and the vintage camera is considered a classic today.

These were very popular cameras with students. That’s because they were a great camera to learn on, having just enough features to provide flexibility and control without too many confusing extras.

Plus they were sturdy cameras that lasted for ages. It continued to be manufactured for 15 years with some variations such as the OM-1MD and OM-1n being produced over the course of that time. 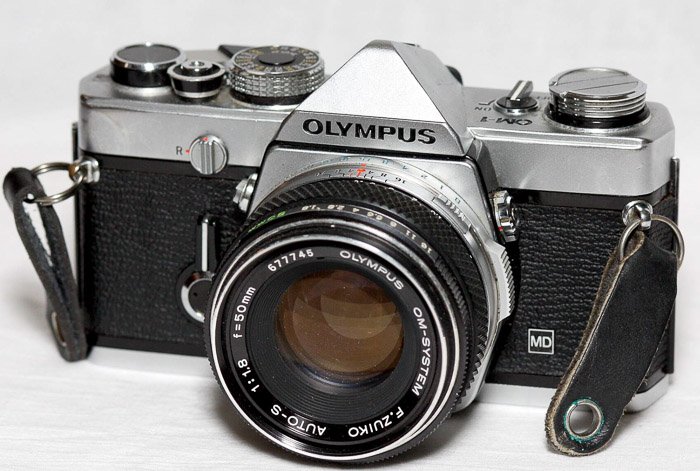 If you were impressed by the sales of the Canon AE-1, then get a load of this! The K1000’s extraordinary longevity makes it a historically significant camera.

The K1000’s inexpensive simplicity was a great virtue and earned it unrivaled popularity as a basic but sturdy workhorse. And it eventually sold over three million units.

Super easy to get your hands on still, and very well made too. This vintage camera should be at the top of anyone’s list. 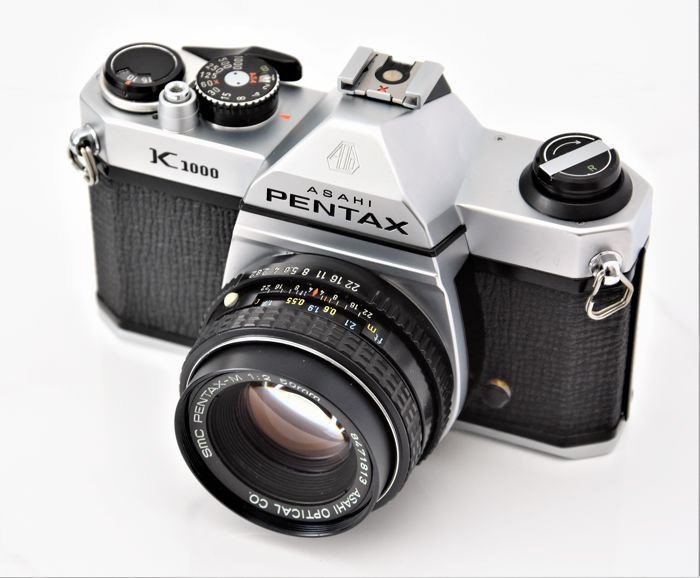 Okay, so this one may be stretching the $100 budget ever so slightly. But there are always bargains to be had on eBay. The Nikon F3 succeeded the Nikon F and the F2. These two models were already famous for extreme ruggedness and durability.

It was a very popular camera, and you’ll still find people shooting with them today. Just like Canon EOS film cameras, the lenses of newer Nikon’s will still fit on these old models’ camera body.

A perfect sought after vintage camera. As far as Nikon film cameras go, you can’t go wrong with the F3. 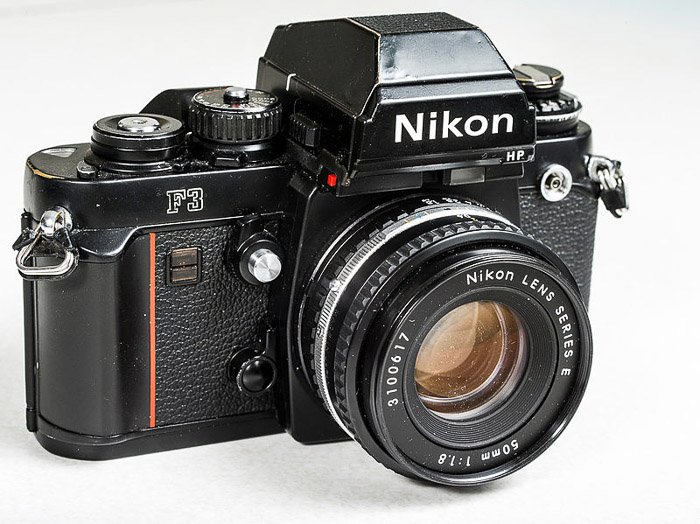 Fun fact for you—Minolta is an acronym for “Mechanism, Instruments, Optics, and Lenses by Tashima.” This Japanese brand is one of my favorite vintage camera brands that takes film.
This is a camera close to my heart, and one that I’ve owned two of.

The first one was dropped and damaged the light meter, so I replaced it while waiting for it to be repaired. It was first brought into production in 1966, and was produced for 10 years, with only very minor changes.

The easy-to-use light meter in the viewfinder makes very easy, and the pin-sharp lenses make for some spectacular images. I recommend the 35 mm f/1.7. 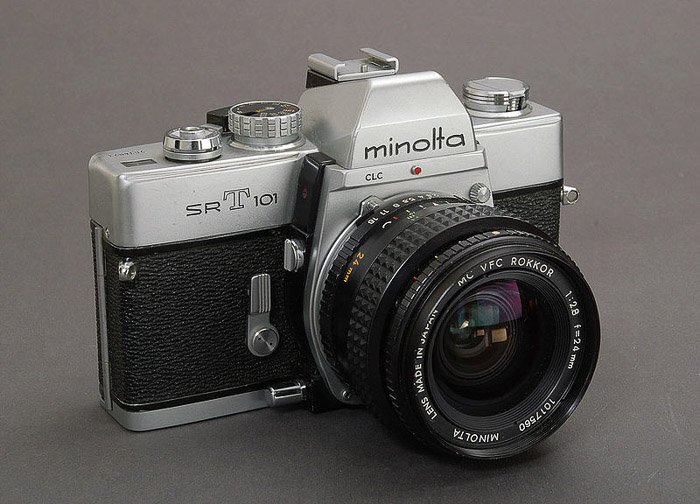 This camera was the first to have a viewfinder LED digital data display, instead of the traditional but delicate galvanometer needle pointer, which made for much easier and more accurate exposures.
It’s a 35 mm SLR with TTL metering.

And as you set aperture or shutter speed, LEDs would glow in one or two of seven positions, indicating whether the was correct or not. A vintage camera that surpasses most. Not bad for under $100. 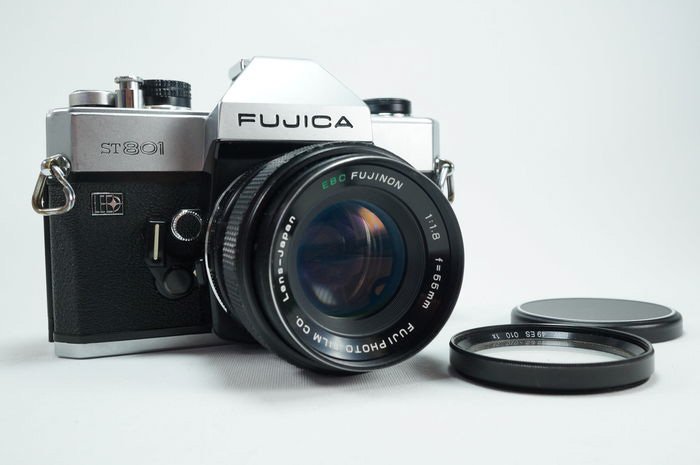 The Diana is a classic cheap toy camera of the 1960s. Made in China, they were very popular in the UK and US. They’re made entirely from plastic, which meant that most were given away as prizes, or sold for nominal sums.

It’s had a revival in recent years and Lomography has made a resurgence especially in street photography. And film photography has become more popular overall.

The Dianas you’ll see on the market today are likely reproductions, but that’s not necessarily a bad thing. It houses 120 film, which is a little harder to develop. With the newer models, you can get 35 mm backs, or simply buy a Diana mini instead.

It just goes to show how much fun you can have with a bit of cheap plastic! It still makes a helluva great vintage camera. 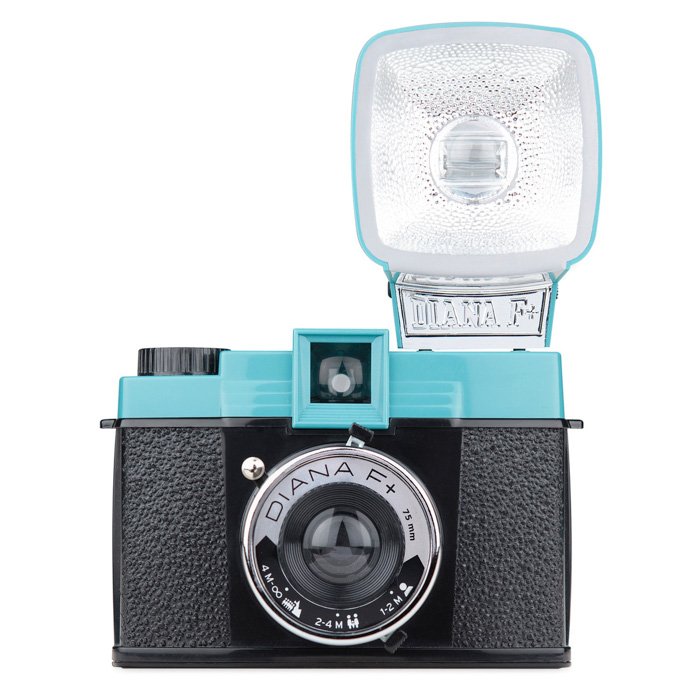 Thanks to The Impossible Project (now Polaroid Originals) film for Polaroid cameras once again being manufactured. You hardly need me to explain what makes Polaroid so special. We all know them for producing hand-shake-induced instant pictures.

What makes the SX-70 so special though is the fact that it folds flat. This is no easy feat for an instant SLR film camera. And well, just look at that vintage camera design! 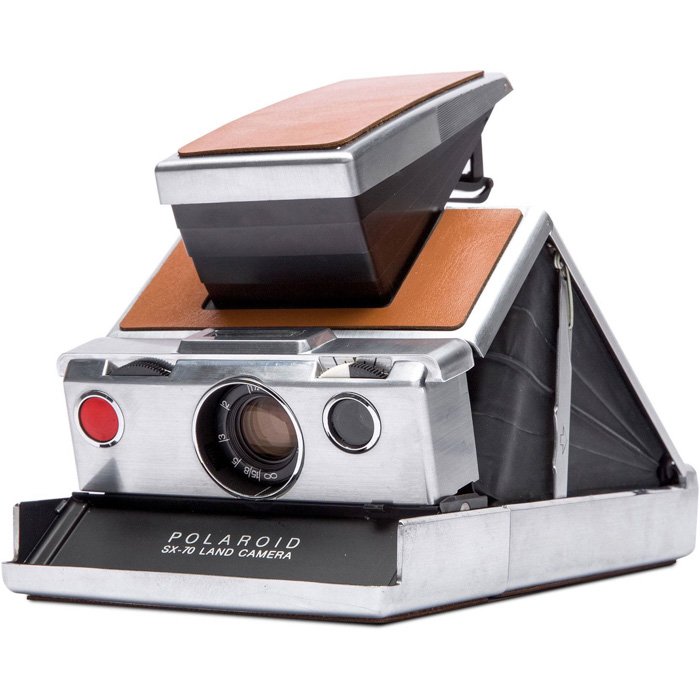 Just because a camera is old doesn’t mean you can’t still have fun with it. And just because it’s under $100 doesn’t mean it won’t take great photos! These cheap film cameras are all proof of that.

Check out our Photography for Beginners course to make the most of these film cameras from the past!