These are 10 film cameras that are widely respected and much loved by the film photography community. There are plenty of other cameras that I could add to this list, but 10 is more than enough for most people’s camera collections.
I get into the habit of buying too many, and then only using my favorites, so trust me, 10 is enough. The list is also narrowed down by format, because although I’d love to put a polaroid camera on there, it’s near impossible to find film for them!
If you’d like to learn more about film photography, click here, or here.
[ExpertPhotography is supported by readers. Product links on ExpertPhotography are referral links. If you use one of these and buy something we make a little bit of money. Need more info? See how it all works here.]

When I was putting this list together, I was trying to decide between the Olympus Pen, Trip, and OM-10, all of which are excellent and notable cameras. I decided on the Olympus Pen though because of its unique format.
It takes 35mm film, but it will take 72 exposures on a single roll of 36 exposures. How? It’s half frame. You point the camera at a landscape, and it takes a portrait photo, taking up just half of the frame.
It was the first half frame camera produced in Japan and was considered portable, hence the name, Pen. 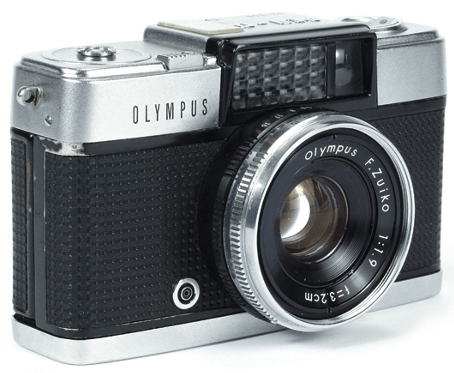 There are many different versions of this camera, the majority of which are rangefinders (remember to take the lens cap off!), but there are also some SLR versions called the Pen F. These cameras are great fun and one that I’ve owned for a couple years now.
They’re so legendary in fact, that you’re probably familiar with the digital reproduction

, even if it doesn’t stay true to the original half-frame format. 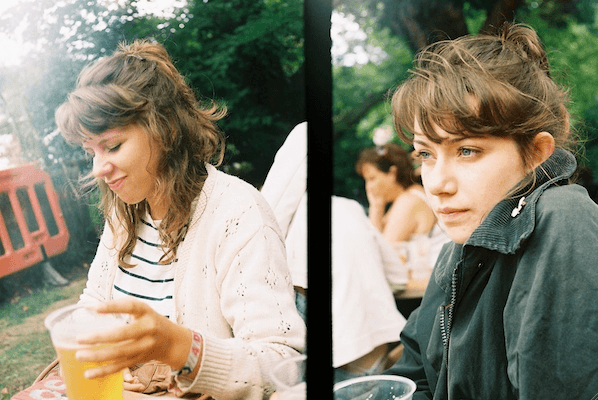 The Nikon F first appeared in 1959, as Nikon’s first SLR camera. It marked a change of direction for the company, moving away from rangefinders, into what they saw as the future; SLR.
A huge range of lenses soon became available, as well as accessories, such as remotes, flashes, bulk film magazines, scientific attachments, and even a polaroid back.
The camera has a good reputation of being well made, reliable and easy to use, with a wide range of high quality lenses. It’s really the lenses that sell any camera for me, and with the bayonet mount on the Nikon F, the selection was (and still is) vast. 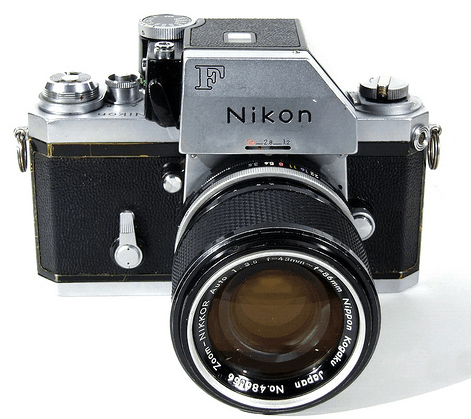 The Canon AE-1 was produced by Canon for nearly 10 years, which sounds a bit absurd when you consider our throwaway culture these days, but that’s just down to how good, and how popular this camera was.
Originally produced much later than the Nikon above, in 1976, it was Canon’s first affordable TTL (Through The Lens metering) cameras, which added autoexposure modes as well as shutter-speed priority, which we’re all familiar with today.
Because of the low cost, and added features, it became one of the most popular cameras of the time. This means it’s not hard to find them today. 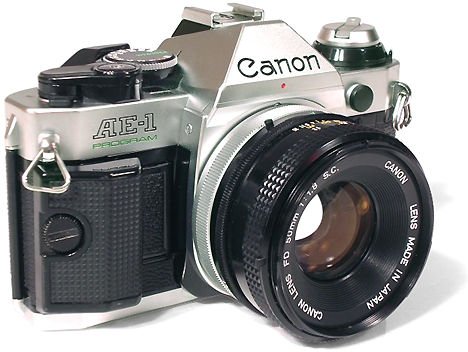 With the exception of the shape, this was a completely new camera for Hasselblad. It changed how the camera worked with a new shutter which would allow flashes to sync at all shutter speeds.
The whole idea with Hasselblad is that it’s interchangeable, and with 6 different lenses, 4 film backs, and 4 viewfinders, there were plenty of options available.
The 500 series was first introduced in 1957, but it wasn’t replaced until the 500C/M came into production in 1970, bringing with it an interchangeable focusing screen and an improved automatic back.
Hasselblad are synonymous with quality and they make some of the most expensive cameras available today, in digital format. There’s even a few Hasselblads in space still from the Apollo missions.
Trusted for their quality, they were popular in their day, and coveted now, only slightly harder to use. They take 120 film, which only takes 12-16 exposures on a roll, and development can be expensive and annoying. 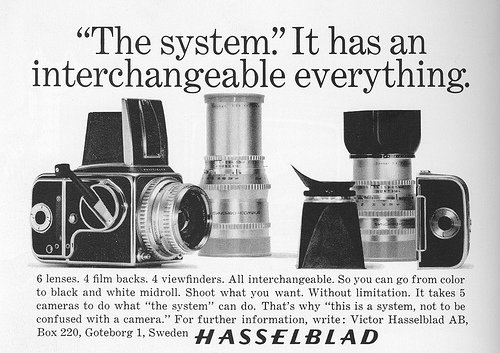 If you’re looking for bells and whistles, then look somewhere else. This camera was aimed towards the amateur photographer market, and it was first introduced in 1976. It continued to be manufactured for over 20 years, even though it was out of date by the time it was released. Why?
Because there was no program mode, nor aperture or shutter priority, or even a self-timer, mirror lock-up, or DoF preview. These were very popular cameras with students because they were cheap, a great way to learn, and lasted for ages.
There’s plenty around, so finding one shouldn’t be a problem. 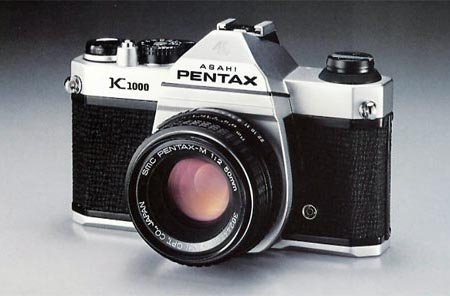 Compared to the other cameras on this list, it’s nowhere near as famous but has a real wow-factor in my books. It’s a panorama camera which takes 35mm film, which works by swinging the lens from one side of the camera to the other.
If you follow the actor Jeff Bridges, then you may be aware that he’s an avid photographer who uses one himself. He even published a book full of photos

in 2004.
They’re good fun, and cost between $500-1000 on eBay. Their 150-degree viewing angle makes for some awe-inspiring photos, even if the camera itself is a little hard to use. 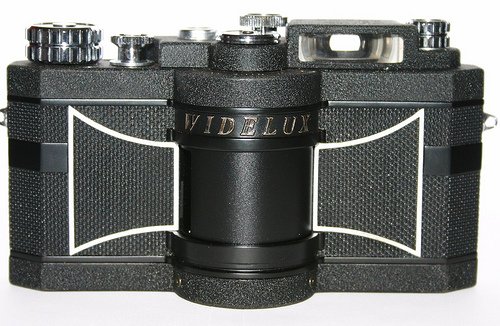 With the regeneration of film photography and iPhone apps that mimic the same effect, such as Hipstamatic and Instagram, Holga has taken on a whole new lease of life, along with a very similar rival camera, the Diana

.
Both are part of the Lomography movement, using cheap plastic lenses and film to produce some very interesting effects. Like the Hasselblad, it uses medium format 120 film, which is annoying to get developed, but there’s also a 35mm version available now.
The cheap manufacturing produces vignetting, light leaks and blurs, which has helped people to fall in love with the nature of film photography again. 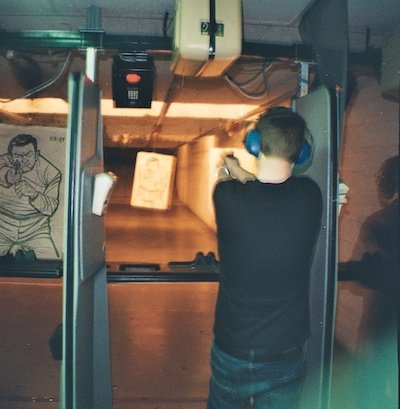 What can I say about the Leica M4? It’s an absolute classic and a symbol of quality for film photographers everywhere. But it ain’t cheap. It was first introduced in 1967, it’s a rangefinder camera with a home in every good, self-respecting photographer’s collection.
The name Leica alone is synonymous with quality, but the M4 makes the name much more notable. The camera continued to be produced until 1975, but the market for Leica’s has such high demand. With not too many people really wanting to sell theirs, you’re looking at around $2000 for one. 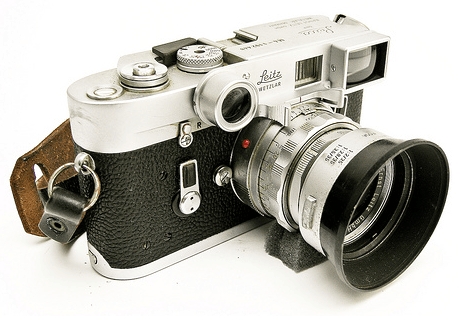 The Rolleiflx E TLR (Twin Lens Reflex) is very different in design to most modern cameras because it requires you to look straight down towards the ground and into the camera, to see a projection of the image.
Two lenses are used, the first is used to capture the image onto film, and the second is used to display the image to the photographer.
This particular model was first produced around 1956, and looks like a typical grandpa camera, with its old styling and Zeiss lenses. Look for the 2.8 models, which incorporated an f/2.8 aperture, which allowed for more light into the lens. A true must-have. 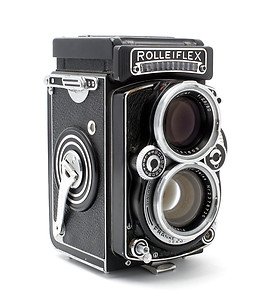 This is a camera close to my heart, and one that I’ve owned two of. The first one was dropped and damaged the light meter, so I replaced it while waiting for it to be repaired.
It was first brought into production in 1966 and was produced for 10 years, with only very minor changes. The easy-to-use light meter in the viewfinder makes very easy. And the pin sharp lenses make for some spectacular images.
I recommend the 35mm f/1.7. I honestly can’t recommend this camera enough. 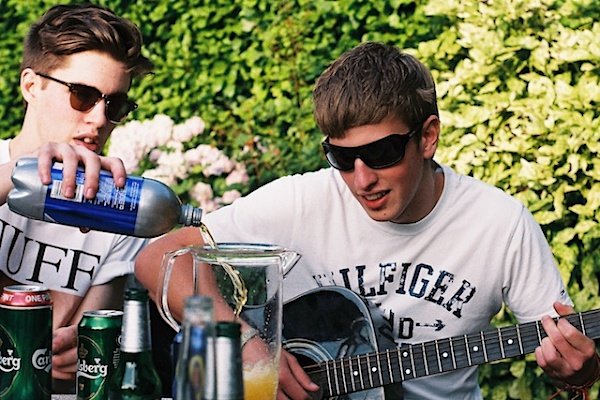