If you find the exposure triangle confusing, you’re not alone!

This article will cover how to control exposure in digital photography. I’ll talk through the three settings that make up the exposure triangle: aperture, shutter speed, and ISO. You will be able to understand how these settings interact with each other. 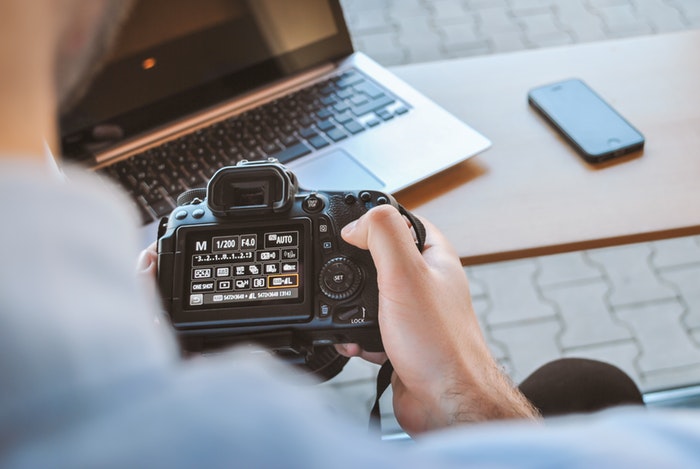 Light on the sensor is what makes the image. Too much light and our photo will be over-exposed. Too little light and the image is too dark.

Photographers can control aperture, shutter speed, and ISO independently in manual mode. Or, we can choose one setting and ask the camera to adjust the others to keep exposure balanced. An example of this would be the Aperture Priority function.

Changing one setting can alter all of the others. It’s the interaction between settings that can be confusing.

I prefer to think of the exposure triangle as a Venn diagram. The settings have some independence, but also overlap. 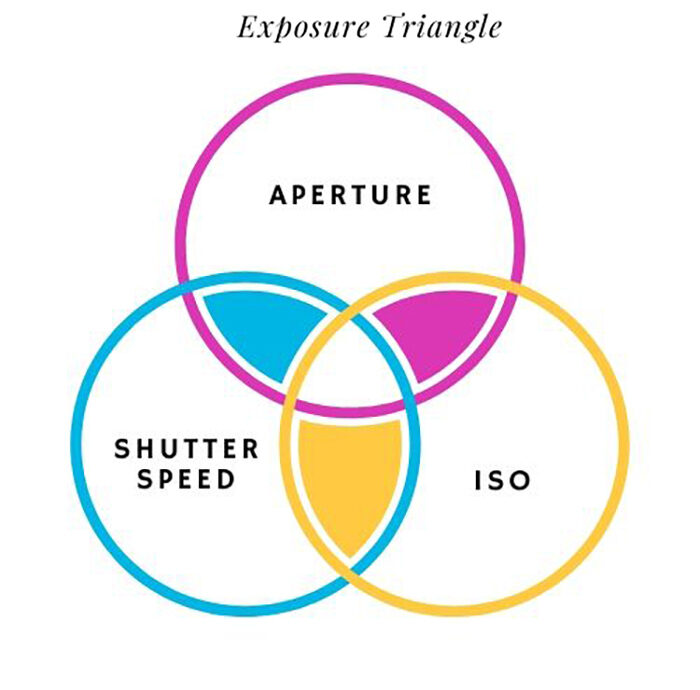 When you press the shutter button to take a photo, the camera opens up a hole inside the lens. The hole lets light hit the sensor. How much light falls on the sensor depends on how big the opening is. A large hole will let in lots of light. A small hole limits the amount of light.

We often want our camera’s aperture to work like the pupils in our eyes. In bright light, our pupils become small to limit the amount of light that we see. In the dim light, our pupils get large to let in as much light as possible and increase how much we can see.

In photography, we refer to the size of the opening as “aperture” (from a Latin word meaning “opening”). Aperture is also referred to as f-stop. 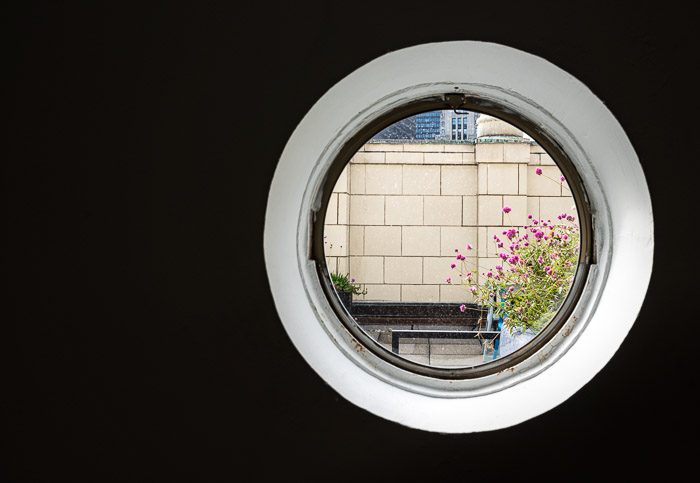 Control Focus With Depth of Field

Many variables affect how much of a scene is in focus. In terms of aperture, f2.8 will generally have a shallower depth of field than a smaller aperture like f16. More of the scene will be in focus at f16, but f2.8 might give me a beautifully blurred background (bokeh). See our article “6 Tips for Choosing Shallow vs Deep Depth of Field” for more information.

Here are two photos of a sunflower taken within seconds of each other. The only setting I changed was the aperture. I took the first photo with an aperture of f2.8, the second with f11. Notice how the focus changes. 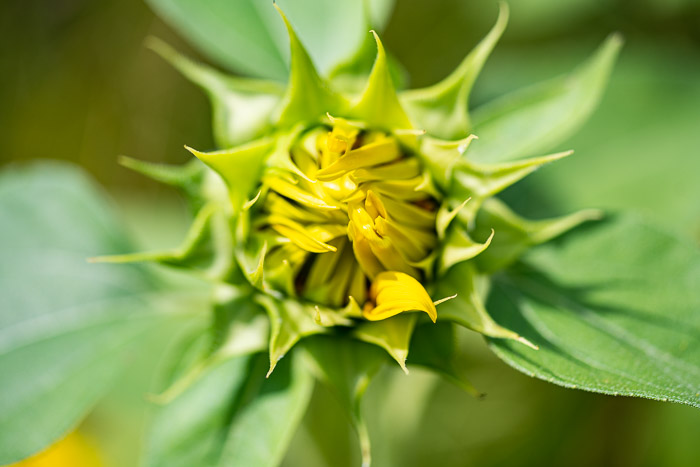 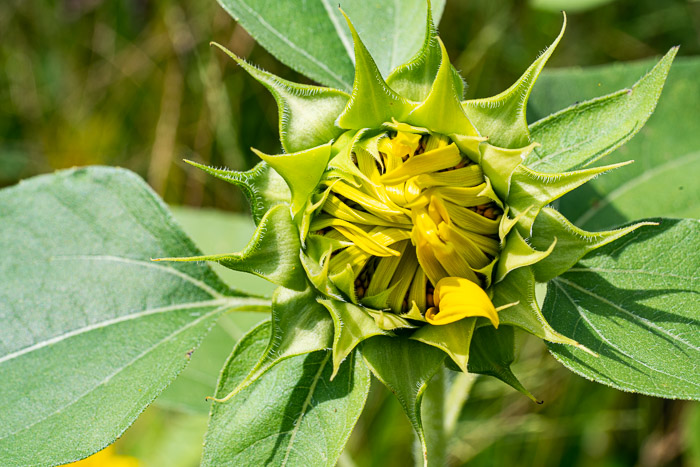 I often shoot in Aperture Priority mode. You may find this option labelled with an A or an AV on your camera. I set the aperture because I want to control how much of the photo is in focus. Sometimes, I want a blurred background, and sometimes I want everything sharp. In Aperture Priority mode, my camera chooses the best shutter speed to balance the exposure.

But here’s the problem and the reason I need to understand the exposure triangle.

In a landscape scene, for instance, I set my aperture set at f16 to get the widest depth of field. I want everything in front of my camera to be in focus. But the opening in my lens at f16 is quite small and won’t let much light strike my sensor. At dusk or on a stormy day, this might be a problem because the sun isn’t providing much light. I need to get more light into my sensor.

Luckily, I have two other settings that determine how much light I let into my camera. Let’s talk about shutter speed next.

What Is Shutter Speed?

If I want more light, I leave the shutter open longer.

More light is good, right? But if I leave my sensor open too long on a sunny day, my image will be so over-exposed that I’ll ruin the photo.

In dim conditions, I want to gather as much light as possible into my camera. I can choose a large aperture (lower-numbered f-stop) and leave my shutter open for a long time.

Let me return to the landscape problem I set up earlier. I will show you how changing the shutter speed let me keep my small aperture.

I photographed the Smokey Mountains at sunset. My aperture is set at f16 to keep everything in focus. Notice how the exposure changes as I leave my shutter open longer.

There is no real limit for how long I can leave the shutter open. Most cameras have a built-in, 30-second time limit in the menu settings. But this time limit can be extended by putting the camera into “bulb” mode. Bulb mode lets me manually control the amount of time my shutter is open using an external remote control to trigger the shutter button.

Opening my shutter for these long exposures means setting up my camera on a tripod.

There is a limit to how slow the shutter speed can be when holding the camera. I naturally move a little bit. This motion will show in the image at a slow shutter speed.
Some photographers are very steady and can handhold at 1/10th of a second. But most people are more comfortable at faster shutter speed.

When hand-holding, the general rule of thumb is to use the focal length of your lens to set the minimum shutter speed. For instance, if I’m using a 50mm lens, I should set my shutter speed faster than 1/50th of a second.

In reality, minimum shutter speed varies from person to person. With advances in camera stabilization, I can reliably use a slower shutter speed when I’m hand holding my camera.

Shutter speed determines how much light hits my sensor. It can also freeze or blur motion.

I sometimes shoot in Shutter Priority mode. This mode lets me choose whether I want to freeze motion or capture motion blur. This option may be labelled with an S or a TV on your camera. My camera will choose the best aperture to balance the exposure.

Let me add to the landscape problem I talked about above. If I’m taking a photograph of a landscape at dusk AND the scene includes moving wildlife, I can’t just lengthen my shutter speed to get more light. I want a small aperture to get everything in focus, AND I want a fast shutter speed to capture the animal.

I’ve got one more setting I can change to help me get a bit more light.

ISO adjusts the sensitivity of my sensor.

Photographers refer to ISO with a system of numbers. The lowest default on most digital cameras is ISO 50 or 100. My current camera has a maximum ISO of 102,400.

If I choose a higher-numbered ISO, my sensor becomes more sensitive to light.

With film cameras, the sensitivity of the film changed rather than the camera sensor. Photographers loaded the film with an ISO of 100 into their cameras. If they wanted more light sensitivity, they changed the film in their cameras to ISO of 200 or 400.

Digital photography has made ISO much more flexible and usable. With a turn of a dial or a quick trip to my camera’s menu, I can change the ISO from picture to picture.

In this way, ISO interacts with aperture and shutter speed to balance the exposure. If I need more light, I can increase ISO to make my sensor more sensitive to the light coming into the camera.

Let’s return to my landscape problem. If I’m photographing wildlife at dusk or dawn, I want my shutter speed to be fast enough to freeze motion (faster than 1/500th of a second). But fast shutter speeds don’t allow much light to hit my sensor and at dusk, I won’t have a lot of natural light.

To let in more light, I can increase the aperture, but this will also narrow my depth of field. I may not be able to get as much of the animal in focus as I’d like. Increasing the ISO gives me another option.

When to Use Auto ISO

I often use auto ISO in changeable lighting conditions. In auto ISO, my camera will choose the best ISO to create a balanced exposure, given the aperture and shutter speed settings.

My camera allows me to set a maximum ISO. I often choose ISO 5000. I do this because there is a limit to how high of an ISO I want my camera to choose.

Setting the ISO to Avoid Grain

There is a trade-off that limits how high I set my ISO.

As ISO increases, so does grain in my image. If I set my ISO too high, I get a very bright picture that has lots of visible dots. The dots are called “grain”. I want a clear image rather than one with lots of grain.

Fortunately, with each generation of digital camera, ISO performance increases. This means I can set my ISO higher with little or no perceptible grain. I can also use post-processing tools like Lightroom to take out some of the grain introduced by high ISOs.

Most modern digital cameras can handle ISO 800 to 1600 with little or no perceptible grain.

If I have plenty of light or if my camera is on a tripod, I set my ISO at 100. This setting gives me the clearest image. If I need more light, I increase my ISO to make my sensor more sensitive.

In dim conditions, I want to let as much light in as possible. This means setting a large aperture (small number), a slow shutter speed, and a higher ISO. Example settings might be f2.8, 30 seconds, ISO 5000.

In bright conditions, I want to limit how much light gets into my camera. This means setting a small aperture (large number), a fast shutter speed, and a lower ISO. Example settings might be f22, 1/2000th of a second, ISO 100.

But other factors affect my choices. Aperture also controls the depth of field (focus). Shutter speed affects whether the motion is frozen or blurred. High ISOs introduce grain into the image.

The example settings given above are extreme. Each scene needs an optimal combination of settings. With three ways to control exposure, I don’t have to rely on one setting to get a well-exposed image.

It is the combination of settings and how they interact that makes the exposure triangle.

Try out our quick capture cheat sheets to brush up on all the essential photography concepts! 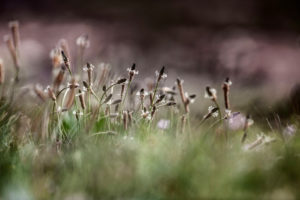 What is Focal Length? (And Why it Matters in Photography!)

One of the most important aspects, when you buy a lens, is the focal length. This lets you know how close you need to be… 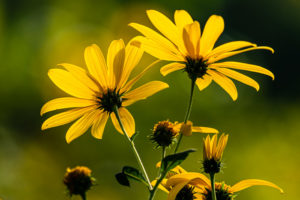 What Is Shallow Depth of Field (And How to Use It!)

We spend a lot of time as photographers trying to get our images in focus. When an image comes out blurry, we hit the delete…

We know it isn’t always easy to stay motivated with photography. And even if you are motivated, it can be difficult to find the information…
See all articles in Photography Cheat Sheets