Fireworks are essentially streaks of light that are moving in the dark. But how to photograph fireworks for best results?

Firework photography isn’t an easy task to master. And it often results in blurry shots and inaccurate exposures.

So how do photographers snap those amazing images you see online? With the right gear, the proper settings, a few shooting tricks, and some patience.

This guide on how to photograph fireworks will help you take your fireworks images from everyday to awesome. 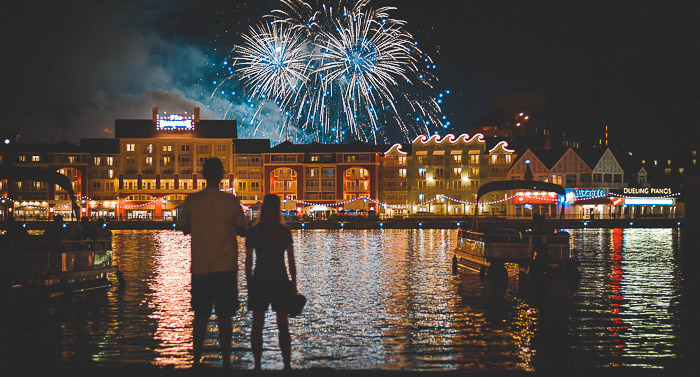 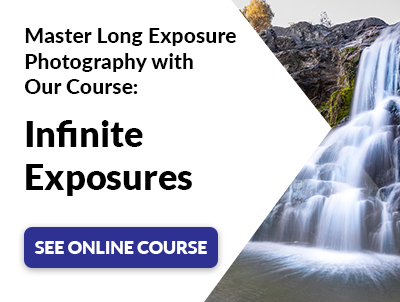 What Gear Do You Need To Photograph Fireworks?

A fireworks display is spectacular to watch. But photographing them without the right gear or proper techniques is anything but. Your fireworks photographs won’t be anywhere near dazzling.

So how do you take pictures of fireworks with a DSLR?

You don’t need a specialised camera for photographing fireworks. The smaller camera accessories can make all the difference. But, what lens is the best for fireworks? There is no one particular lens best suited for firework photography.

Those are the essentials, but there are a few more things that can make the experience a bit more comfortable: 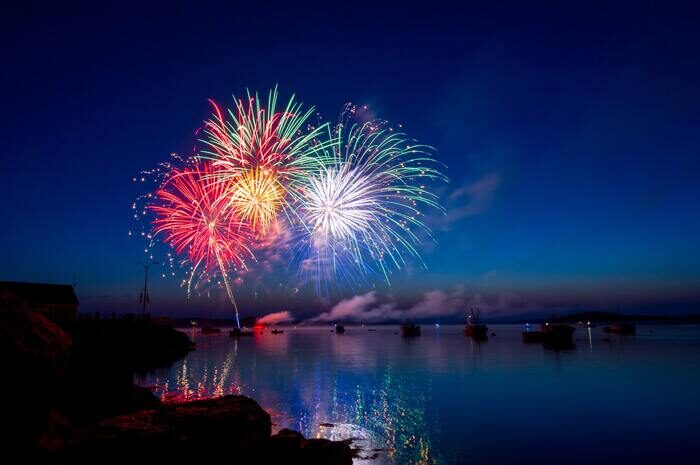 How Do I Photograph Fireworks?

The first thing is to plan ahead on when the fireworks are taking place. The Fourth of July and New Years are the two best examples.

Plan to arrive at least half an hour before the show is scheduled to start. Spend that extra time scoping out locations while there’s a little bit of light left.

Also, use this time to set up your camera settings. Also, think about your prime or zoom lens’ focal length. This will decide where you should place yourself.

Identify where the fireworks will be launching from. Then imagine what the composition would look like ahead of time at different potential locations.

Look for neat features that would add interest to the scene. These include a reflection of water or fireworks over a cityscape.

These are things that will strengthen the composition. You should also look out for potential pitfalls. These would be power lines in the way or tall trees obstructing the view. 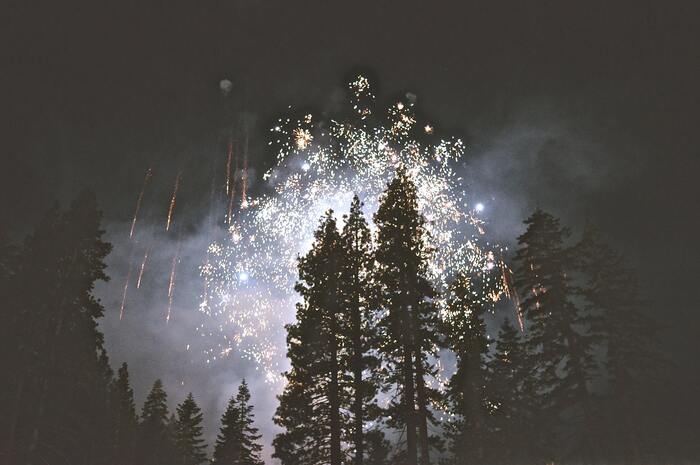 Fireworks photography is an extension of the long exposure technique. This means that a tripod is a must. Especially if you want to capture an environment under the fireworks shots.

Once you’ve spotted your composition, set up the tripod for that view. Whether it is a Nikon or Canon DSLR or one of the mirrorless cameras, having a tripod is one of the best photography tips.

But if you don’t have one, how do you take pictures of fireworks without a tripod? In that case, find a steady location where you can place your camera so it can sit still for long exposures. This can be a table, a platform, or a wall.

Another option is to hold your camera. But how do you take pictures of handheld fireworks?

You would have to set your shutter speed to at least 1/20th of a second. Try shooting when there are many fireworks bursting in quick succession. This will increase the chances of getting a good shot.

Tripod or not, consider using a cable release for your shutter to minimise camera shake. Failing that, use a self-timer. The important part is gaining the best vantage point to capture the firework photographs. 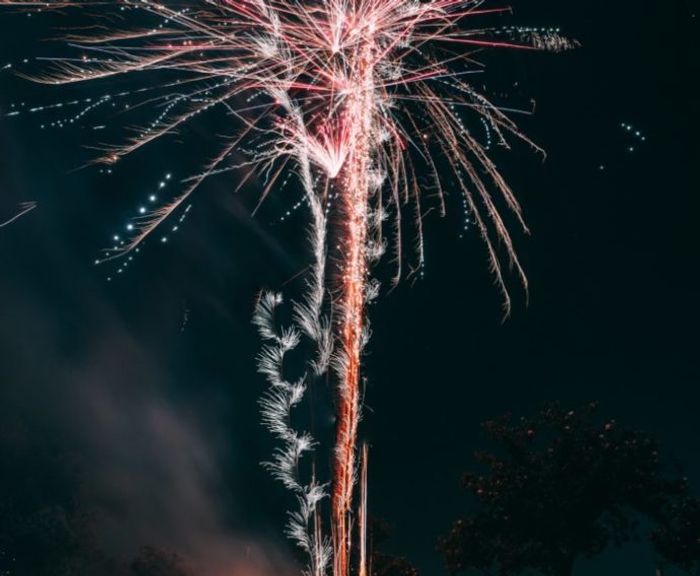 An important question is, what settings should I use to photograph fireworks?

Some fireworks are quick bursts. Others maintain an impressive streak across the sky for several seconds.

The trick to getting the firework’s entire movement across the sky is to shoot in Bulb Mode. Don’t use a preset shutter speed.

In ‘Bulb’ Mode, you control the shutter speeds by holding down the shutter release. The camera continues recording until you let go of that button. The in-camera ‘Bulb’ setting makes it possible to shoot fireworks without knowing how long that next burst is going to last.

You are using a long shutter speed and fireworks are actually pretty bright. So you should start with the lowest ISO available on your camera. A low ISO is typically ISO 100 or 200.

The exact exposure values are going to vary. This is based on whether there are any other lights in the scene and how many fireworks bursts are going off at once.

Start with an aperture of f/11. As you shoot, check your exposure and adjust as needed. Choose a larger f-number (a smaller opening) if the shots are too light.

You can include several fireworks or choose a smaller f-number (a wider aperture) if the shots are too dark.

For the most control in post, change the file type to RAW. But remember to stick with JPEG if you don’t plan to edit the images.

Note: While shooting in manual mode is best, some compact cameras have a fireworks mode. If you don’t have manual modes, try shooting in the fireworks scene mode. You’ll still need a tripod, but you won’t need to manually set the exposure and focus (steps three and four). 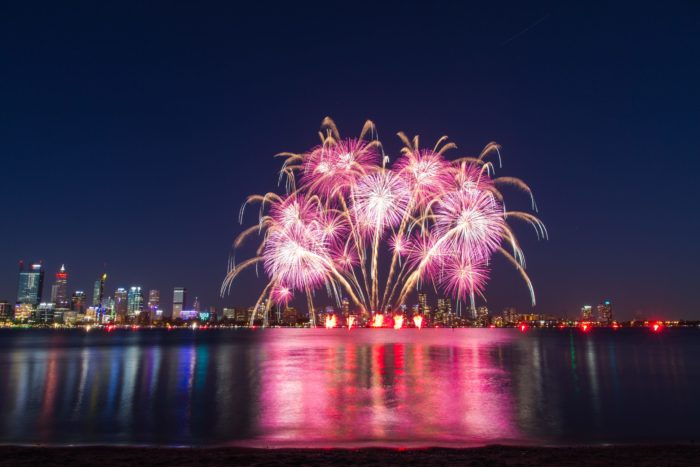 Photographing fireworks requires manual focus, but it’s not as tough to master as it sounds.

Turn your camera to manual focus. Then adjust the focus dial on the lens until the distance meter shows the infinity symbol.

Since the fireworks are far away and you aren’t using a very narrow depth of field, this works most of the time.

But, once the fireworks start, be sure to preview your first shot and zoom in. If the fireworks are a bit soft, you may need to pull the focus back in a bit closer. 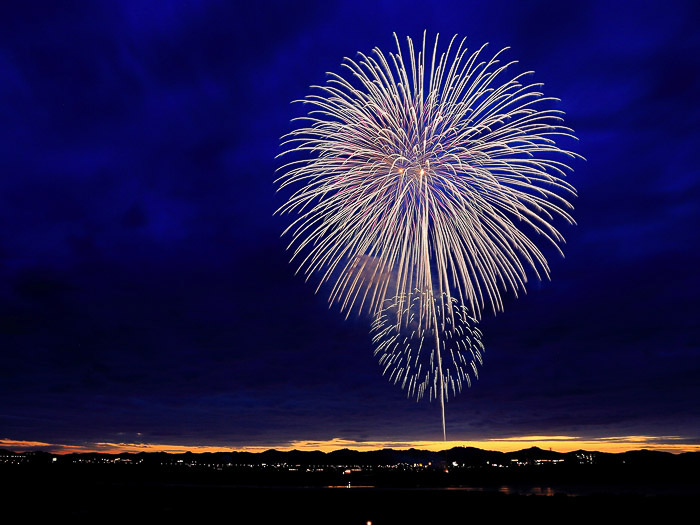 If you have a remote release, make sure to use it for shooting. Many newer cameras have WiFi, which also allows you to use your smartphone as a release.

You’ll get sharper results with a remote release, but I’ve shot many fireworks shows without one. Move your hand as little as possible while holding the shutter release.

Shooting fireworks photography is about timing. I release the shot as soon as I hear the screech that indicates the firework is on its way up into the sky. 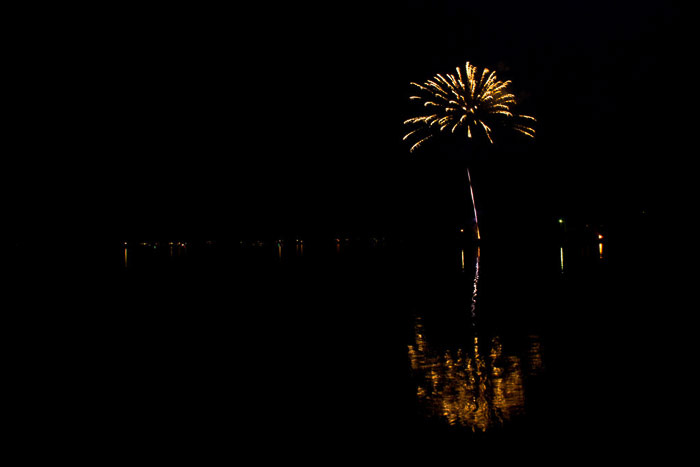 Even after shooting fireworks every summer for the past few years, I usually don’t get it perfect on the first shot. To make sure I’m starting out with good camera settings, I do the following:

Checking the photograph is important when you first start the shoot. Don’t check every shot. You’ll take your eyes off the sky and miss another opportunity. But check back ever so often.

If the fireworks show starts at dusk, you may lose some light. You’ll need to brighten up your aperture to account for the low-light.

Fireworks shows tend to last long. This gives you plenty of chances to capture great shots and get some variety. This length will help you to set the aperture and exposure time correctly. 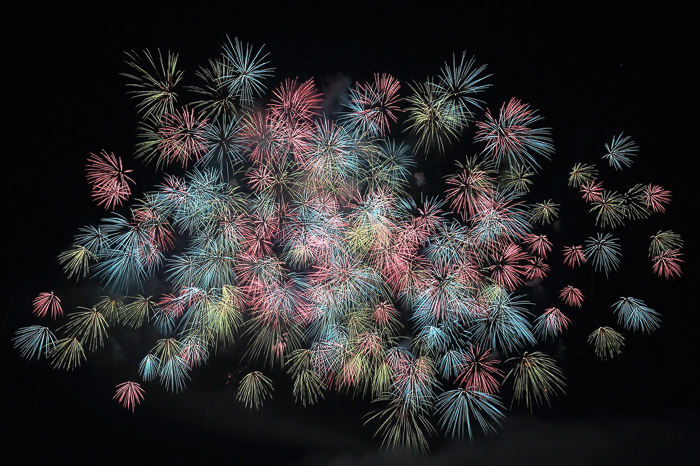 After you’ve got several fireworks photos you’re happy with, try for some variety. Switch between a wide-angle view and a close-up of the sky by zooming or swapping lenses.

For longer firework shows, try moving to another viewing spot. Make sure you’re still respecting other spectators as you move!

If your exposure was just right for a single firework burst, use a narrower aperture. You should get an accurate exposure with the extra light coming in from multiple bursts.

Most firework shows are long enough to allow you to get several different shots. By the show’s finale, I’m usually ready to put the camera down. And I can watch the rest of the show without looking through a viewfinder.

At that point, I’ve already gotten quite a few shots. Plus the number of fireworks exploding at once in the finale makes it tougher to get a good exposure. It also leaves the sky filled with more smoke.

However, if you want to photograph the finale, stop that aperture down even further. 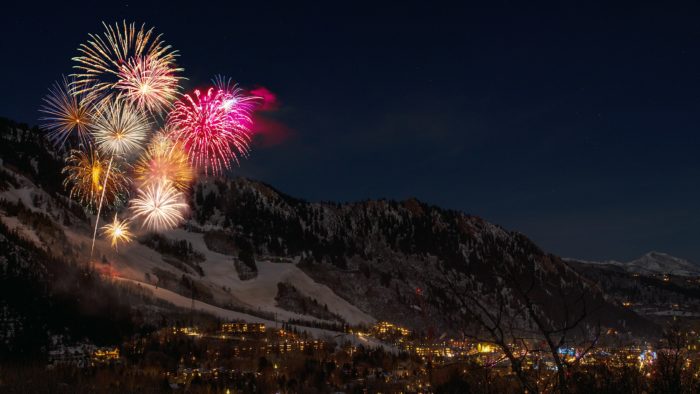 Shooting in RAW gives you complete control over the way the final photograph looks. Open up those fireworks show photos in your favourite photo editor, and start post-processing.

Fireworks shots can benefit from a contrast adjustment. I do that by controlling the individual exposure channels first. Start by pulling up the highlights and whites. Then pull down the shadows and blacks to darken the sky and surrounding scenery.

I might also pull the highlights down. This helps to minimise the smoke created by the fireworks.

If the shot still needs a boost, use the contrast adjustment. It’s best to create contrast by adjusting highlights, whites, shadows and blacks first.

Bring out the colours by tweaking the saturation and vibrance. Watch any surrounding landscape for odd hues—saturation is very easy to overdo.

Finally, make sure to sharpen the image before finishing up. A RAW file doesn’t get the same sharpening treatment that a JPEG automatically receives. 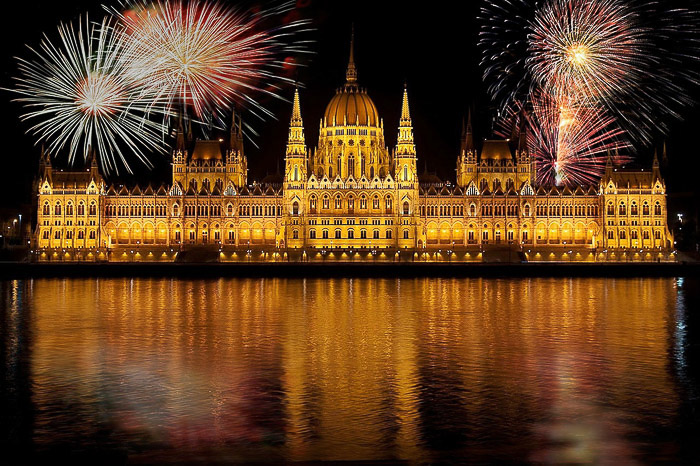 Photographing a fireworks display is either a difficult disappointment to learn from or a fun challenge to try.

With this guide to keep in mind, you’ll be able to capture fireworks shots that are as dazzling as the actual show.

We also have a great article on how to photograph fire or when to use different shutter speeds to check out next! 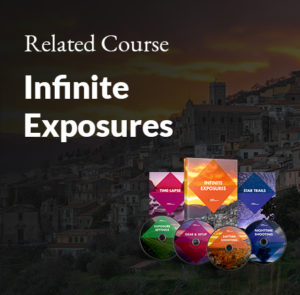 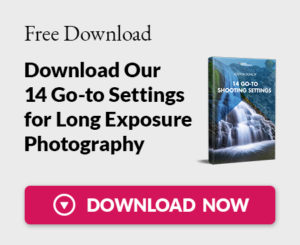 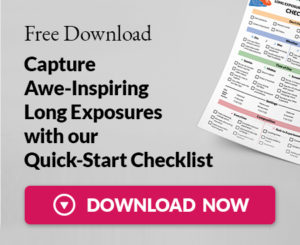 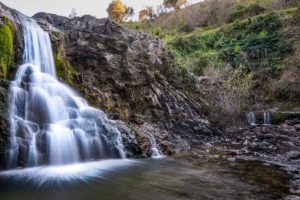 How to Use Photo Stacking for Daytime Long Exposures

Have you ever tried photographing dreamy landscapes in the daytime with smooth clouds? Then you know the challenges of getting the money shot with just… 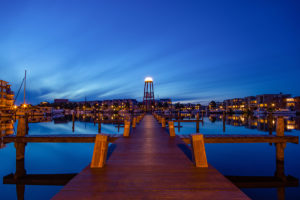 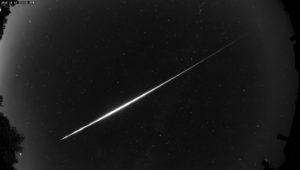 How to Photograph a Meteor Shower

Photographing the night sky is not only about the Moon, planets, stars, deep sky objects or the Milky Way. Comets and meteors are also some…
See all articles in Long Exposure