We can learn a great deal from the rules, ideas and concepts of the photographers we hold in high regard.

The best place to start is with quotes from famous photographers about what makes a good photograph.

What Makes a Good Photograph?

Competitions care more about the content of an image. Not whether it follows photography rules. Just look at some of this year’s winners.

The subject matter is either something we are not used to (think Salgado’s work of the mine). Or it’s a moment in time captured through special techniques.

The world’s ten most iconic images look at subjects of historical value.

Some people say that an image with a sharp focus, a correct balance of light and that follows compositional rules is a good image. It might be true. 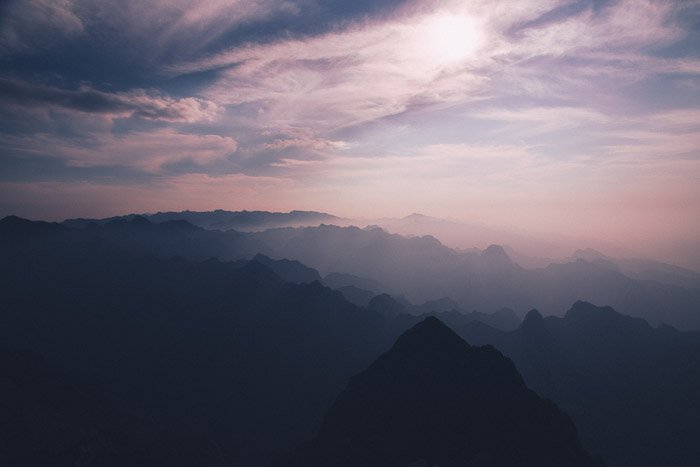 Without interest, it also sounds beyond boring. And you’re using generic guidelines like everyone else. This means your image gets lost in the tide.

Sharp focus isn’t necessary to win awards, competitions and Pulitzer prizes. Stories created by using emotional or interesting content stand out. And for this to happen, there needs to be a relationship between you and the scene or subject.

The idea comes down to personal attribution. I know what I like, and what I think is a good photograph. You will have a completely different idea.

I may look at the technical skills and the fleeting connection. But you may look at composition and flow.

There is no formula for what makes a good image. Different people like different images. Who the image is for and what it portrays can be the tipping point.

A portrait of a person that shows them as they are can be a good photograph, even if it’s not what the subject may want to see. 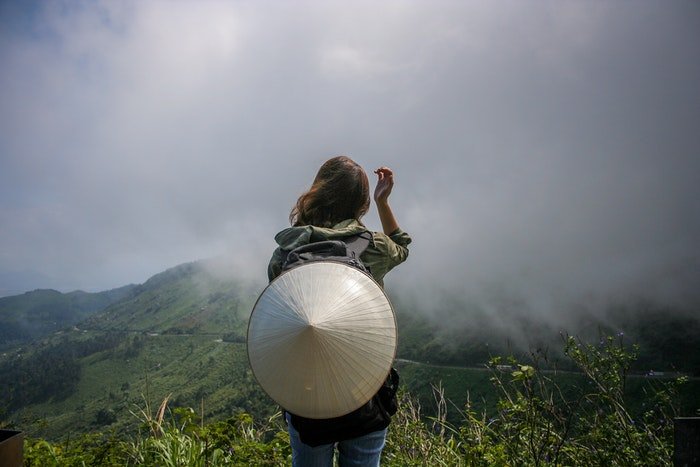 Let’s turn to the experts now, and see what they have to say.

“If your pictures aren’t good enough, you’re not close enough.”

Capa is one of the world’s most famous photojournalist. His quote screams that you are too far away. You need to get closer, both physically and mentally.

Create a connection with your subject, even if it is confrontational. 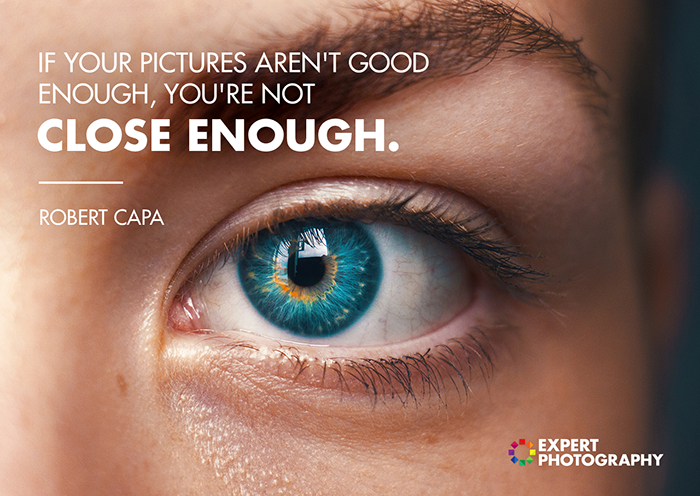 “A thing that you see in my pictures is that I was not afraid to fall in love with these people.”

Leibovitz photographed several celebrities during her career. She took the iconic photo of John Lennon and Yoko Ono just hours before the rockstar was shot.

Her quote makes it obvious that a good photographer has to love their subject to create outstanding pictures. 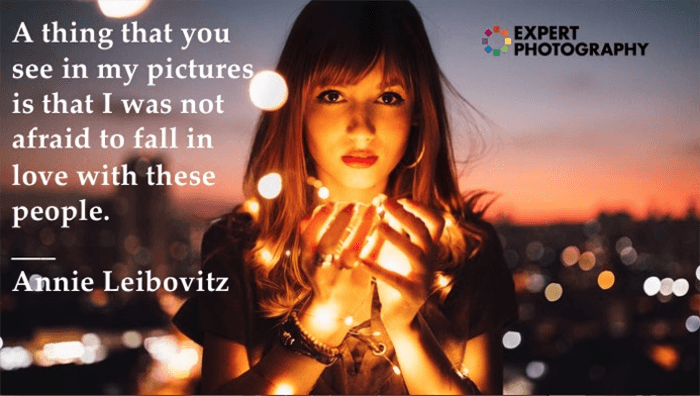 “There are always two people in every picture: the photographer and the viewer.”

Adams was the photographer behind the epic black and white landscapes of America’s national parks. His quote is about what he sees and captures. And about the interpretation from the viewer who glances at the final image. 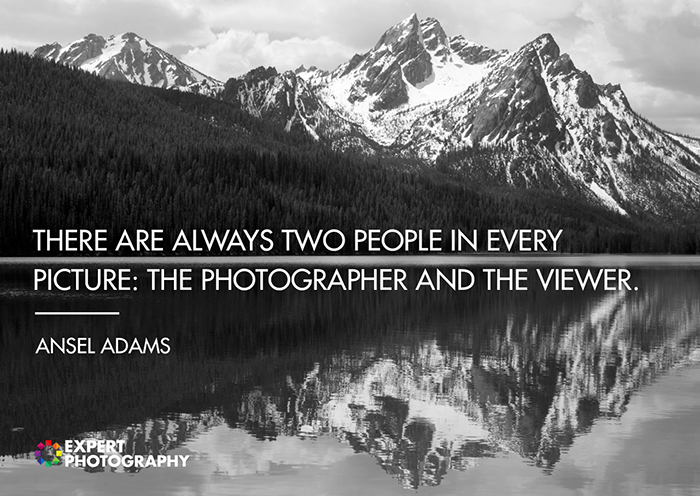 “To me, photography must suggest, not insist or explain.“

Brassaï is the Hungarian/French street photographer we all know and love. Here, he explains that we can’t give out an exact explanation of the image, just the impression.

Viewers bring their own vision when understanding your image. 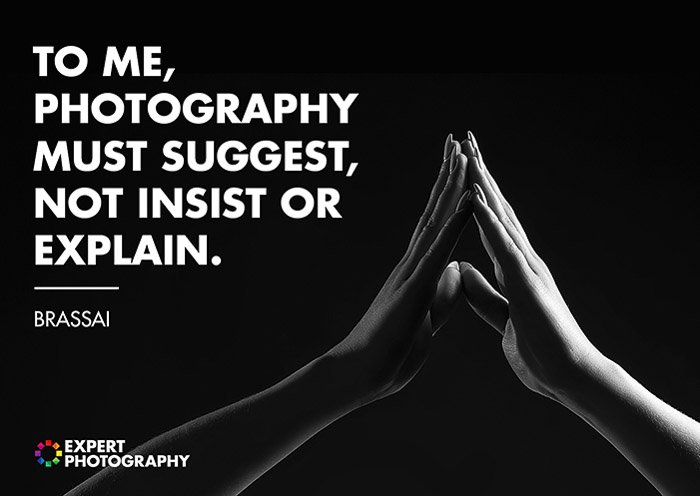 Diane Arbus was an American photographer whose work was featured in recognized magazines. She photographed subjects who stood on the fringe of society. She worked with strippers, dwarves, carnival performers and nudists.

She didn’t objectify her subjects but befriended them. Diane photographed her models in their familiar settings: at home, in a park, on the street or at work.

Her quote highlights how photography should happen without getting into the spotlight. A good photographer stays almost invisible and manages to capture their subjects in a natural way. 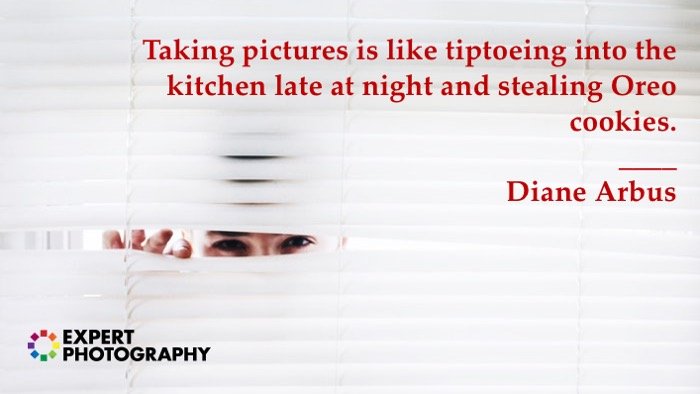 “The picture is not made by the photographer, the picture is more good or less good in function of the relationship that you have with the people you photograph.”

It’s the relationship between the photographer and the subject that makes an image. Not composition or other factors. 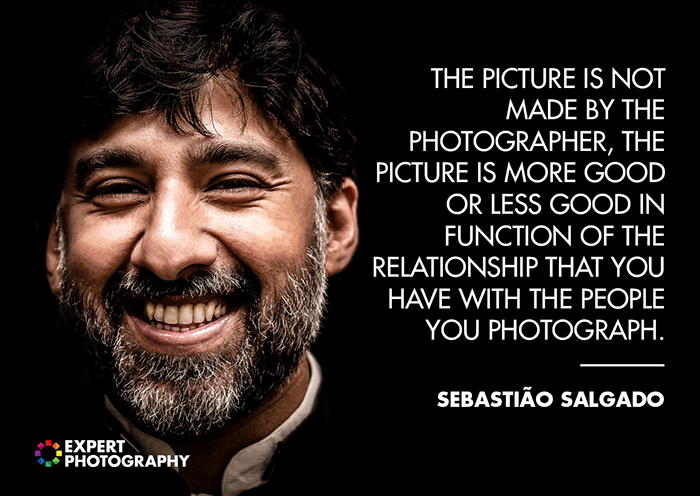 Henri gives us a moment of truth. He states that we need to pass this specific number to start creating something good.

The number is figurative, but still, hard work, time and practise make a good photo. 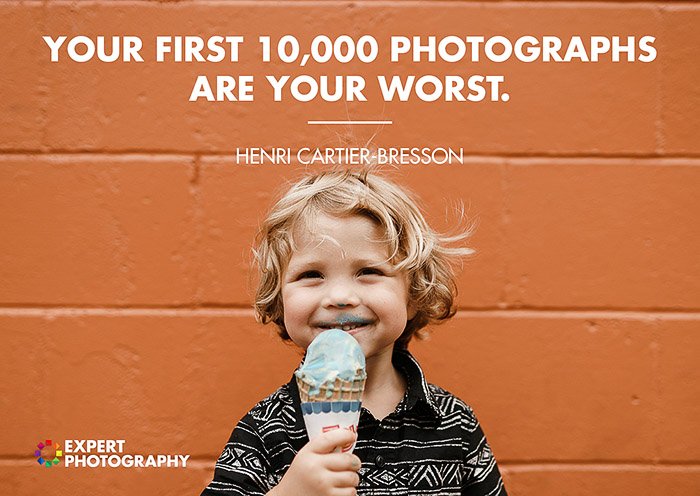 “I like to photograph anyone before they know what their best angles are.”

Ellen is a German photographer and director who worked as a fashion model for ten years before she started to take pictures.

She puts a great emphasis on empowering women in her photographs. Her work appeared in magazines such as Vogue, Vanity Fair and her pictures were also used for album covers.

Ellen never forces her models to do anything. But she gives them roles to play so that they feel empowered.

Her quote explains how a good photographer can take the best shots when the model feels natural and forgets about the camera. 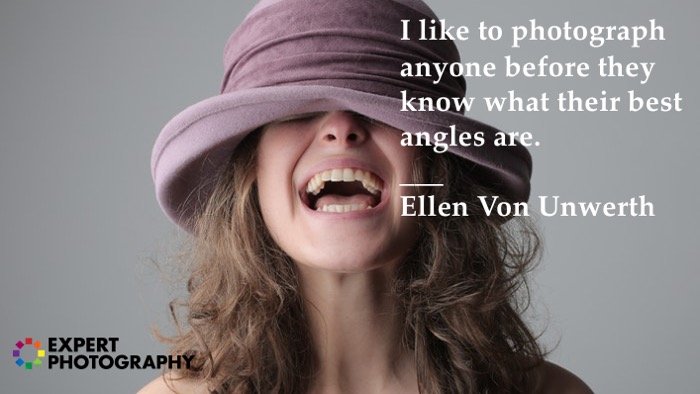 “All photographs are accurate. None of them is the truth.“

No image tells the truth. The complete truth, anyway. Think about it. An image taken by you fits your own interpretation, at any given time, from any given angle.

It shows a slice of truth to you, whereas the viewers will see it differently.
Knowing this can help you capture a scene in a different light, showing you a slew of possibilities. 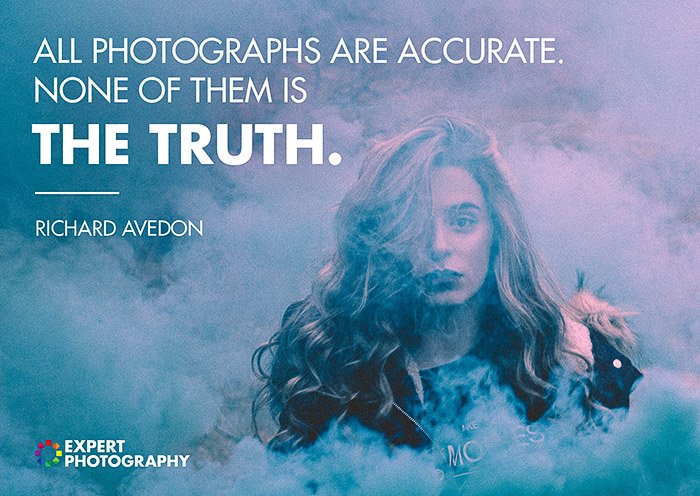 “Photography for me is not looking, it’s feeling. If you can’t feel what you’re looking at, then you’re never going to get others to feel anything when they look at your pictures.”

If you don’t feel anything, you can’t expect others to. By using feeling, you create images that come from a deeper idea of yourself.

You put more of yourself in the image, which makes it important and stronger.
It also helps with the storytelling, an important aspect of good photography. 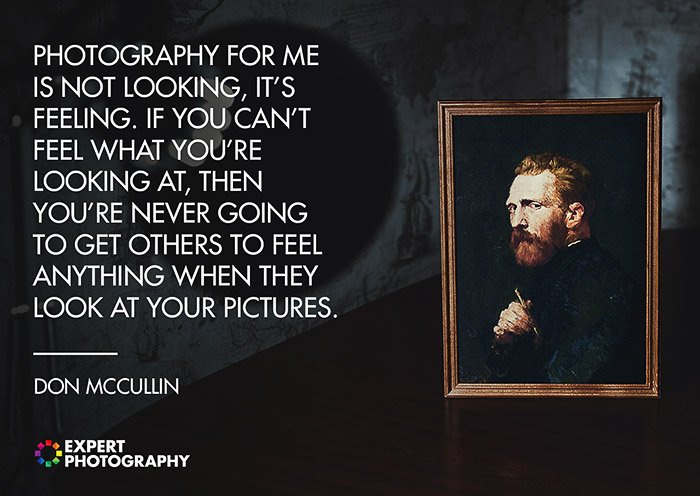 “Beauty can be seen in all things, seeing and composing the beauty is what separates the snapshot from the photograph.”

Matt is a landscape and commercial photographer from Dorset, England. He focuses on working outdoors and took photos in several challenging environments. He has more than 36 000 Instagram followers.

His quote explains that everyone can spot the obvious beauty in the world. But good photographers also spot the hidden features, and they pay attention to thorough composition. 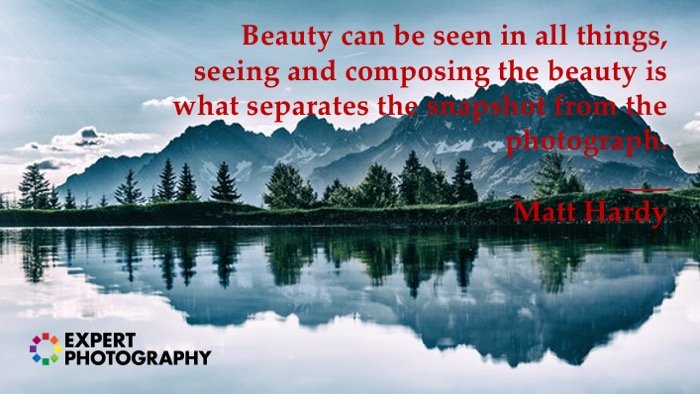 “A good photograph is one that communicates a fact, touches the heart and leaves the viewer a changed person for having seen it. It is, in a word, effective.”

Capturing images that communicate to the viewers will be considered a good photograph. The viewer might be able to relate through personal experience.

It could even challenge their perspective. Either way, the image sticks in their head. Good doesn’t mean perfect, happy or even nice. 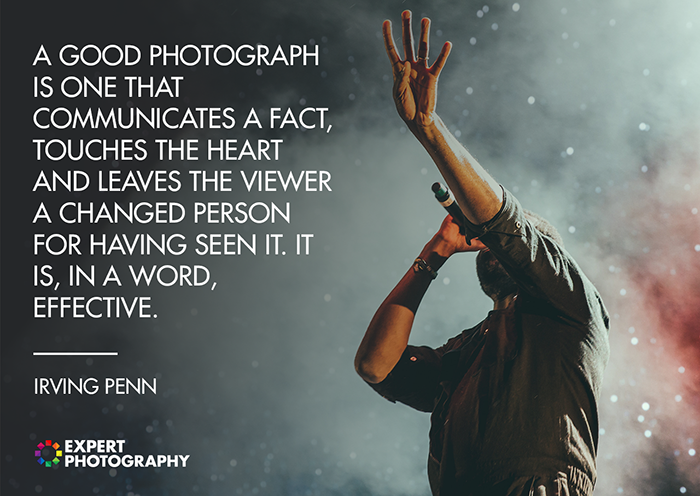 “What I like about photographs is that they capture a moment that’s gone forever, impossible to reproduce.”

His quote describes that a good photo captures something that cannot be reproduced. A good photographer looks for new and unique moments. Instead of copying other’s settings. 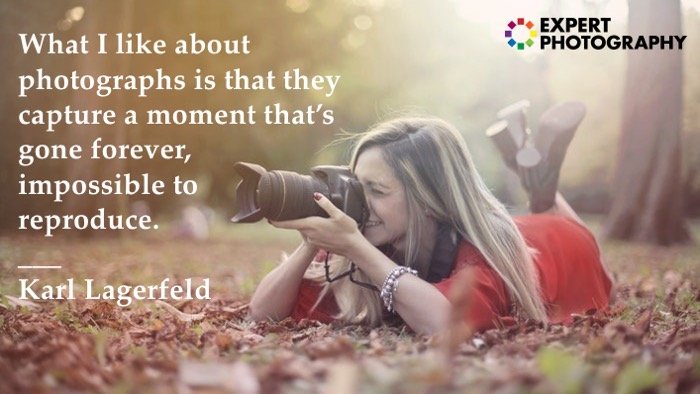 The people in front of your camera are more important than the actual image. The relationship you have is what creates the posture, the expression – the portrait. Just firing off shutter releases says nothing, and you’ll get nothing from it. 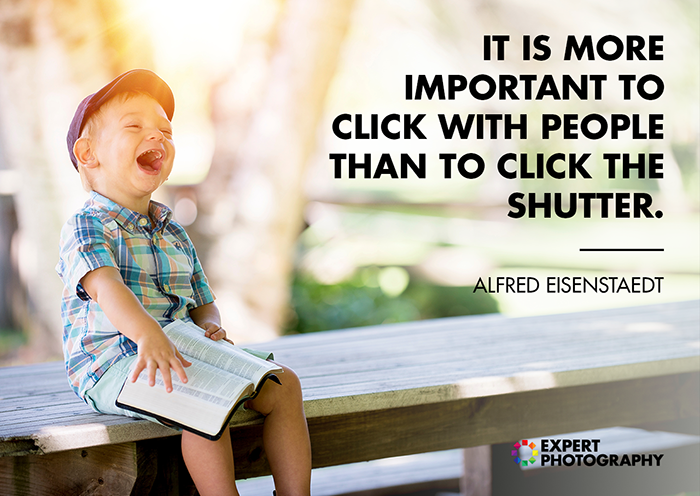 “Photographs open doors into the past, but they also allow a look into the future.”

Sally is an American photographer who is famous for photos of young children and landscapes.

Her photography collections featuring young children brought her great success. But they were also controversial because of the dark topics they tap into.

Sally’s quote is describing her children photographs very well. It highlights that a good photograph tells a story that started in the past and continues in the future. When we look at a picture and it makes us think, we know it has a deeper meaning. 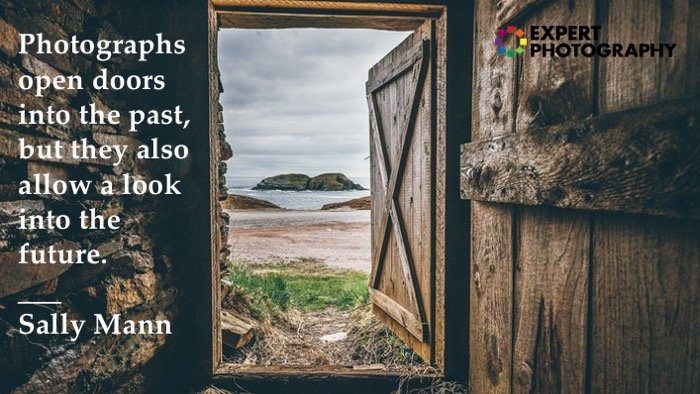 “Nowadays, with digital printing, it’s easy to make everything perfect, which is not always a good idea. Sometimes the mistakes are really what make a piece.”

Cindy is an American artist who is one of the most influential photographers. Two of her images are among The 10 Most Expensive Photographs in the World.

She often photographs herself and plays the role of the director, make-up artist, model and stylist. Her work has a great influence on contemporary art.

Her quote claims that a good photograph doesn’t have to be perfect. Edited and staged photos won’t be as honest and meaningful as pictures with a little imperfection. 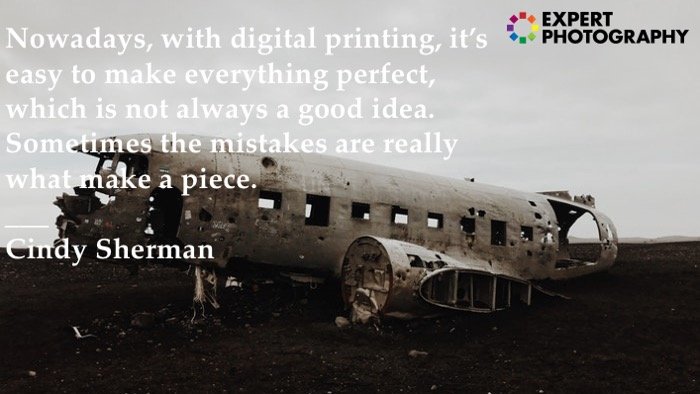 “If you want to be a better photographer, stand in front of more interesting stuff” – Jim Richardson

The most basic and truthful quote comes from Jim Richardson. He is saying your scene or setting control your image. On a basic level, it is a simple truth.

And it puts the power of creating a good photograph in your hands. After all, you are the one who decides what counts as interesting. 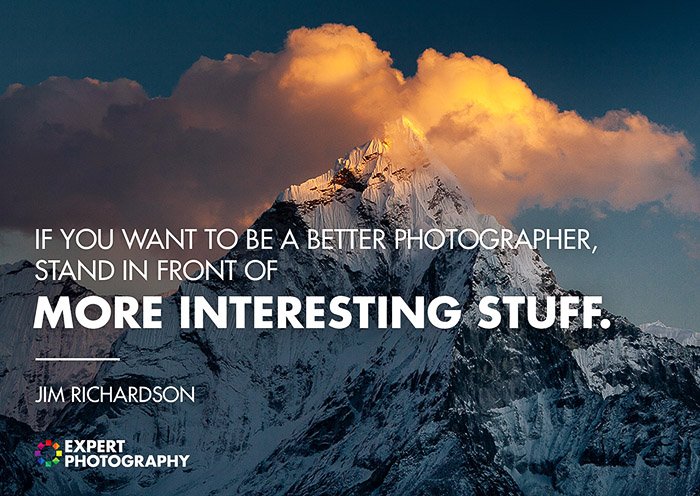 Looking for tips to improve your photography skills? Don’t miss out on our Quick Capture Cheat Sheets!