Do you want to capture amazing wildlife images? This is the article for you.
We’ll take you through the most important dos and don’ts of wildlife photography. Everything you need to know to start improving your nature images.
These rules apply whether you are photographing in the wilderness or your own backyard so check them out. 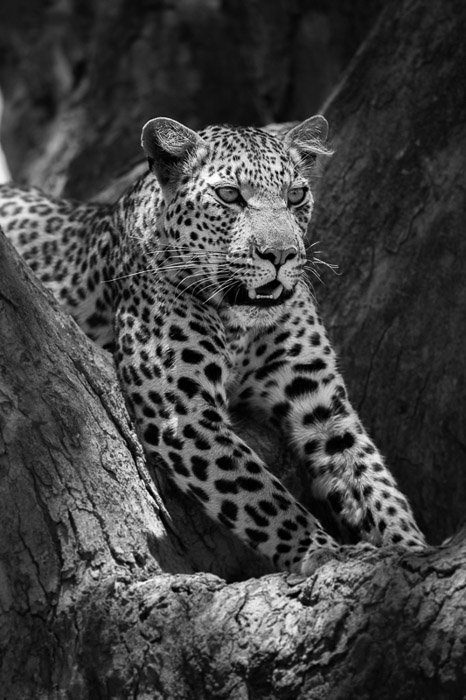 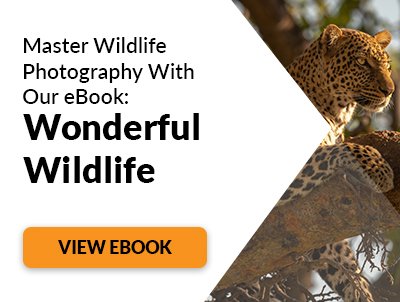 11. Do Research Animal Behaviour Before You Photograph

Famous wildlife photographer Paul Nicklen claims he spends months researching. He studies his target species or region before he ever heads to the field or clicks his shutter.
This is an extreme example, of course. But knowing the natural history of the animals you want to photograph is crucial. And it will pay off when it comes to your photography (and your safety!).
Say you want to photograph your local migrant birds. You should know what time of year those birds are present, and what their habitat is. You might even want to know what they sound like so you can better find them in the field.
Animals have different behavioural patterns depending on the season. Knowing the approximate location they will be found in given months will help you to find them sooner.
So yeah, definitely DO your research. 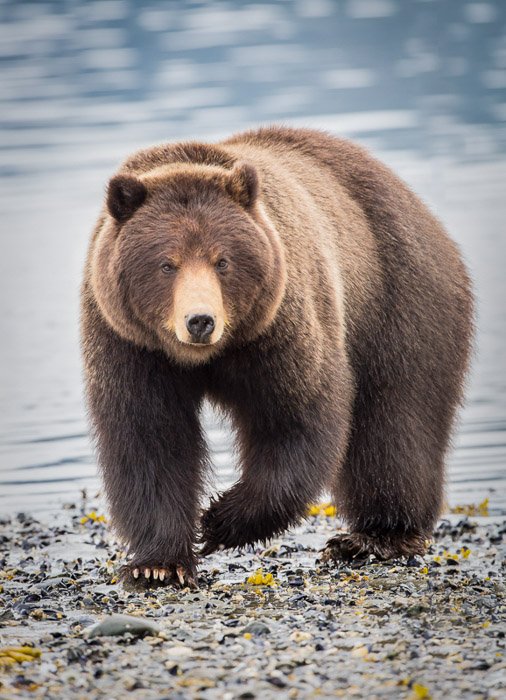 That Time My Client and I Stumbled on a Mama Bear

I was walking through tall grass near the coast in Alaska’s Katmai National Park with a participant in one of my photo tours. I had a long lens over my shoulder, attached to a tripod. My eyes were scanning the meadow, looking for our photographic quarry – Katmai’s famous Brown Bears.
It wasn’t hard to find them. There were almost 20 bears scattered around the enormous field.
Then, I glanced in front of us, where, through the thick grass, I caught sight of a brownish fur. I grabbed my client by the arm and whispered “Stop!”
A female brown bear and two cubs were napping in the grass.
I realized with a sudden jolt how close we’d come to quite literally stumbling onto a bear and her cubs. We backed off a few paces, well out of her personal space, and settled in to make a few images.
The bears of Katmai are tolerant of humans, to an extent. They will allow photographers and bear-viewers to be in much closer proximity than bears elsewhere in Alaska and the world.
But you need to understand their behavior. If you don’t, you at least need to travel with someone who does.
This is why you DO need to do your research and understand the species you are photographing. 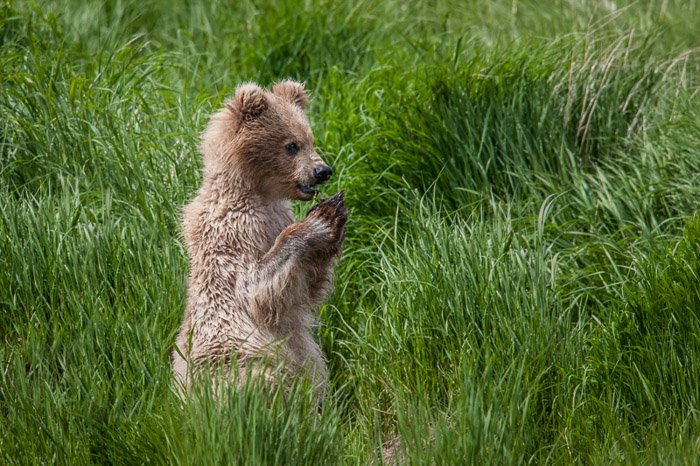 10. Don’t Rely Only on Your Telephoto Lens

A good long lens is a super important part of any wildlife photographers’s kit, but it should never be the only part. When I first got a high quality telephoto, it almost never came off my camera.
As a result, I made image after image at exactly the same focal length. Even when the animal was very close to the camera.
After a while, I realized the images were getting monotonous.
After a while, I started embracing other lenses. Mid-length telephotos and even wide angles. Now, I embrace the opportunity to use a variety of focal lengths. And my images have improved as a result. 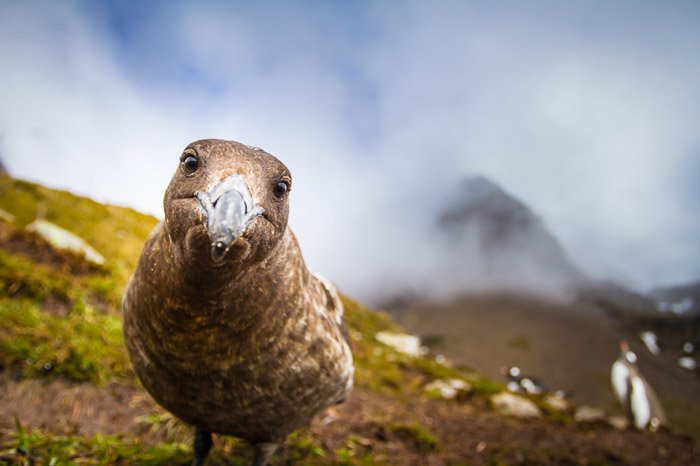 9. Do Keep the Animals’ Welfare in Mind

The price of high quality lenses has come down in recent years. Wildlife photography is no longer the pursuit of the professional or the wealthy. It’s become an affordable hobby. Which, overall, I’d say is a good thing.
It increases awareness of wildlife worldwide. And it generates interest in conservation of wild animals and wild places.
But, it also comes at a cost. So much enthusiasm for wildlife photography can impact the animals themselves.
With the interest comes a responsibility to the animals. The well-being of the wildlife is more important than the image we are trying to create. Period. 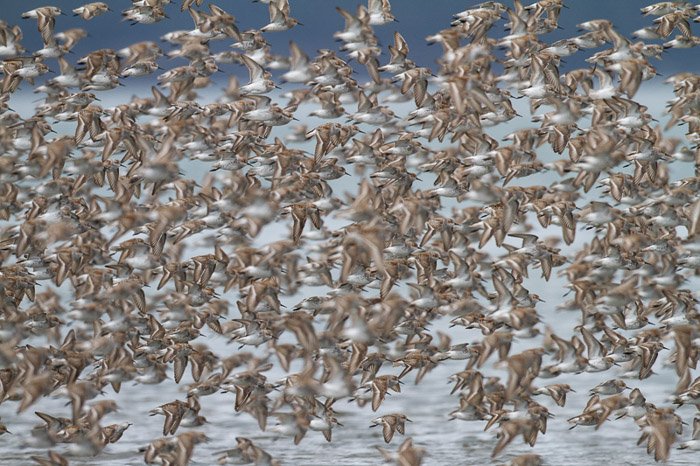 8. Don’t Expect Wildlife Photography to Be a Quick Process

I can think of no single piece of advice more important in wildlife photography than being patient. Good wildlife images aren’t easy to get.
I’ve already noted the importance of putting the well-being of the animals ahead of your images.
That doesn’t mean you can’t get close. Or that you can’t create the dramatic image you want. But it does mean you can’t rush it.
Plan your shoot, be patient, and approach the image you want to create as a problem to be solved.
Think about camera placement, how to get where you need to be, the lighting, and the activity of the animal. All this takes time.
So be patient. 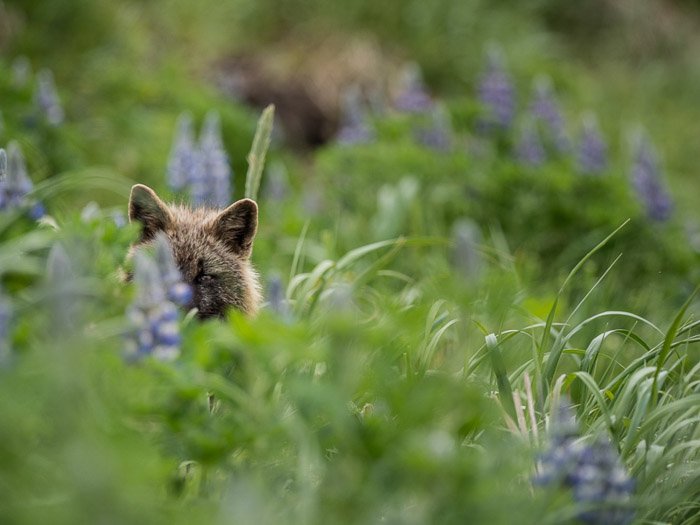 7. Do Remember to Respect Other Photographers

I’ve seen wildlife photographers with big lenses break the rules of national parks, wildlife refuges, or disrespect other users. Over and over and over again.
Last autumn, I watched a photographer approach dangerously close to a large bull moose in Denali National Park. He put himself right in between a couple of buses loaded with tourists also eager to see the moose.
Not only was he acting disrespectful of the moose, but also to all his fellow visitors.
Be mindful not only of your impact on the wildlife, but also on the experience of other users.
In short, don’t be that guy. 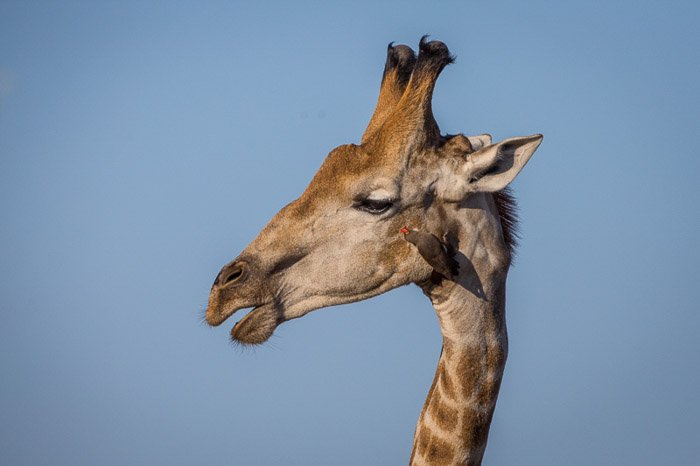 Show animals interacting with one another or their surroundings. Even if it’s something seemingly benign.
This will make for a more interesting, exciting, or compelling photo than a simple standing portrait.
Making this kind of image takes a lot of time and effort. You have to be out there when the action happens. This is where knowing the animal’s habits comes in handy. 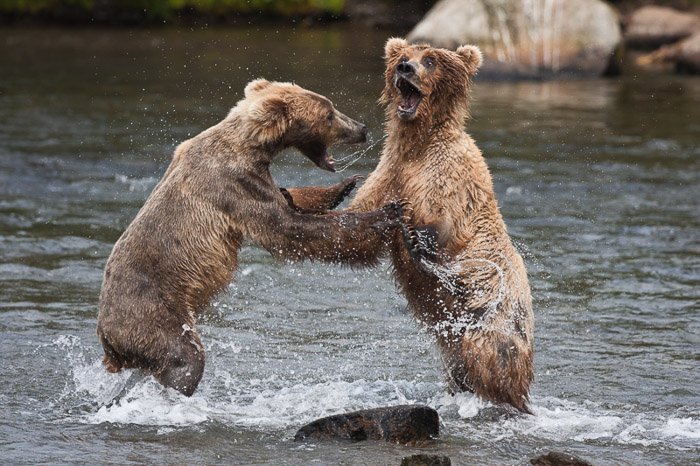 5. Do Take Pictures of Animals Being Silly – It Will Draw Attention

Animals, like humans, do silly and funny things from time to time. Catching something funny will make an otherwise boring image, something special.
Even a poorly lit image, showing humorous behavior of animals will draw attention.
Take these images of a beaver. In the first he appears to be blowing me a raspberry while in the second he is laughing at me. Beavers are jerks. 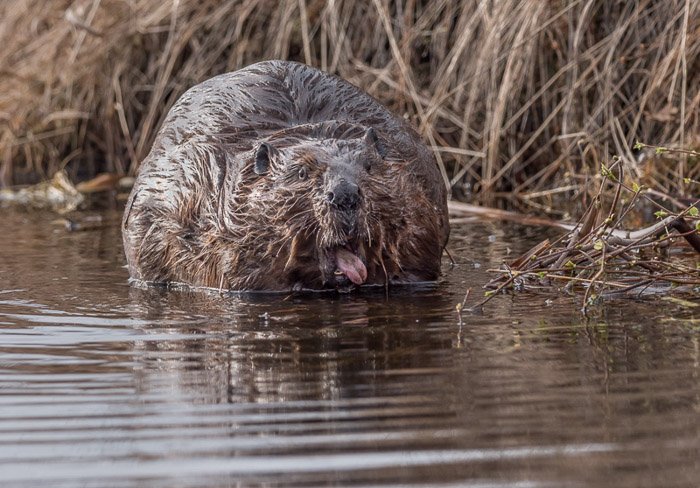 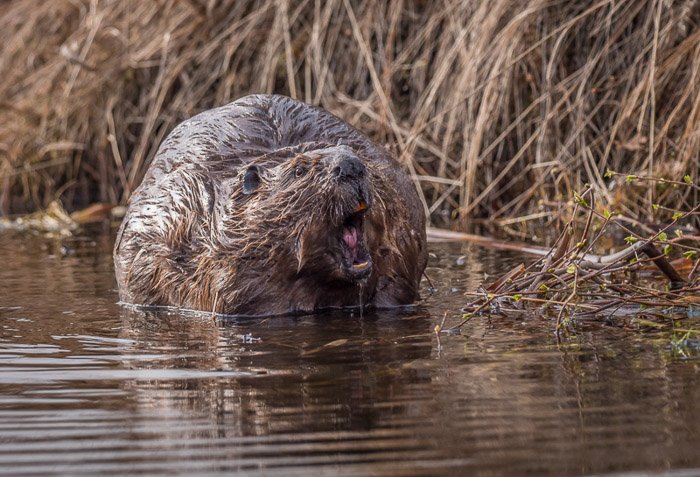 4. Don’t Forget to Get Eye Level With Your Subject

Or even lower. This adds a level of intimacy you won’t find from a standing position.
Take a look at any series of bird photographs. Those with a low, or eye-level perspective will almost always be more compelling than those made from a standing position.
This is a tough one for new photographers to embrace, because it requires some work. You’ve got to be willing to get down in the mud on your hands and knees (or even lay down in the mud). You won’t find that perspective otherwise.
It’s tough, it’s messy. It’s necessary. Do it. 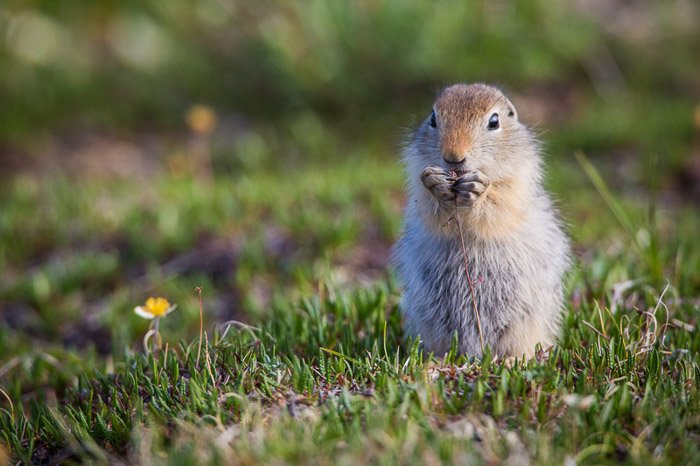 There are occasional exceptions. But most wildlife images look best when the eye of the animal is in focus.
When you look at an image, whether it’s a portrait of a human, or a picture of a wild lion, the entry point is the eyes. It’s the first thing we look at.
If those are out of focus, even just a bit, it throws off our perception of the image.
Unless you have a good reason not to, focus on the eye. 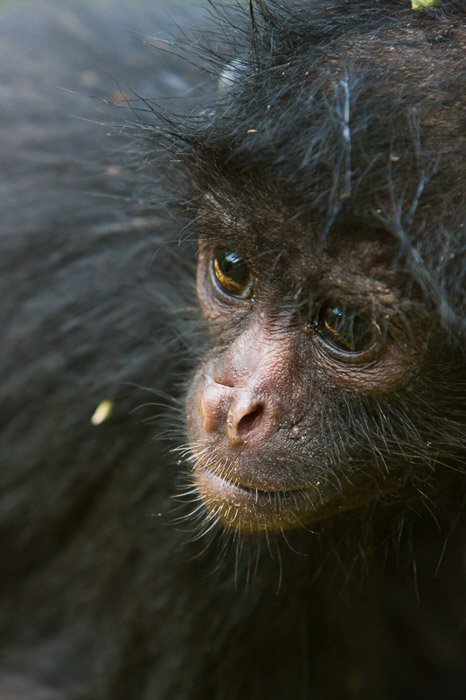 2. Don’t Forget to Include the Surroundings

This applies to all wildlife photographers, particularly beginners. Most want to get very close to the animal and make up-close portraits. There is definitely a place for this kind of image.
But I often find them less interesting than a well-composed shot that shows the environment and habitat as well as the animal itself. These kinds of images are more descriptive. They will frequently tell a more compelling story than a simple portrait.
Remember to go beyond the portrait shot and tell a bigger story. 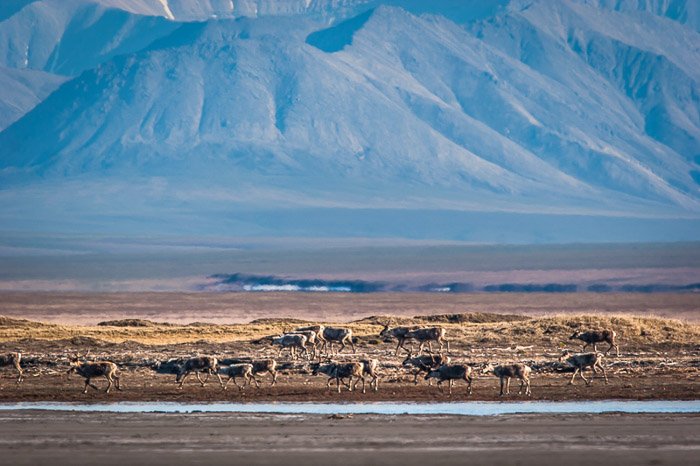 1. Don’t Forget About Your Safety

The internet is full of videos of “photographers” doing stupid things with wild animals. Bison in Yellowstone National Park charging too-close. Tourists holding cell phones.
Selfie-stick wielding fools wandering into the Brooks River with fishing bears. People patting lions from the windows of their safari vehicles.
While animal attacks are exceedingly rare, it is important to remember that they are WILD. Even in national parks where the wildlife is accustomed to having humans around, they are not pets.
Keep a respectful distance. And learn a bit about animal behaviour. That way you’ll know when your subject is becoming agitated or stressed. This can lead to a dangerous situation, so you’d best remove yourself from the environment. 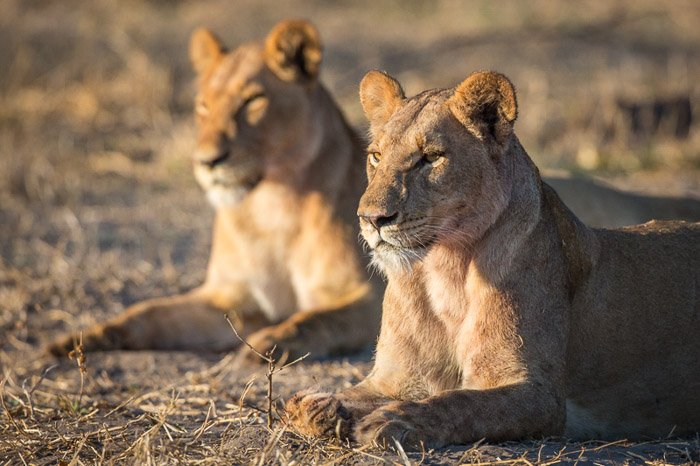 Wildlife photography involves working with wild creatures, you cannot predict the behaviour of these animals. For this reason, there are many things you need to think about before anything you do.
And then there’s the things you should and should not do from creative and technical aspects of photography. These include composition, light, focus, and shutter speed. All to prevent harm to our subjects, and protect ourselves.
However, the core of wild animal photography is simple. Be patient, cautious, and creative.
Invest some time into getting better acquainted with the wildlife, and you will get great shots.
What would you include on your list of wildlife Do’s and Don’ts?

Why not check our posts on reducing glare or using form in your photos next? 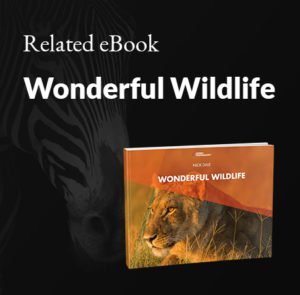 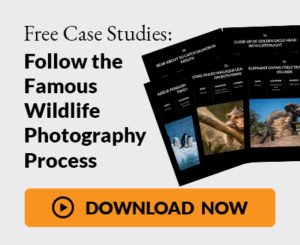 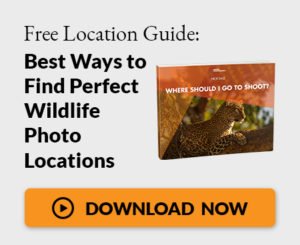 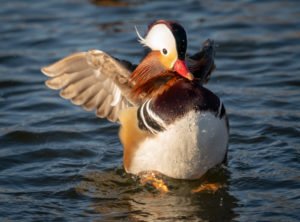 Wildlife photography blends my love of nature with my love of photography. But capturing those frisky critters in an image is a challenge. Here are… 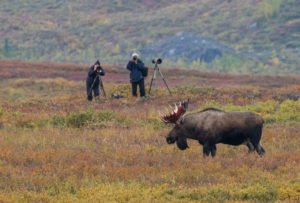 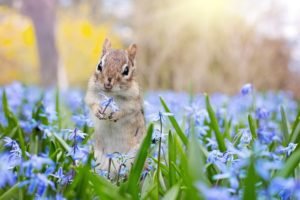 12 Tips to Help You Improve Your Nature Photography Skills

Nature photography covers shooting flora and fauna. This means plants, flowers, and animals, photographed in their immediate environments. It's challenging because of the variety of…
See all articles in Wildlife 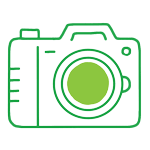 Stay prepared by choosing the best camera possible for your photo

Get access to the exact settings to avoid mistakes & save time

The detailed stories show how the images were captured

Where should we send your case studies?

Stay prepared by choosing the best camera possible for your photo

Get access to the exact settings to avoid mistakes & save time

The detailed stories show how the images were captured

Where should we send your case studies?